Even after Hurricane Sandy, many people wouldn’t prepare before a future storm

Global warming will put more people in storms' paths who have little experience with natural disasters. 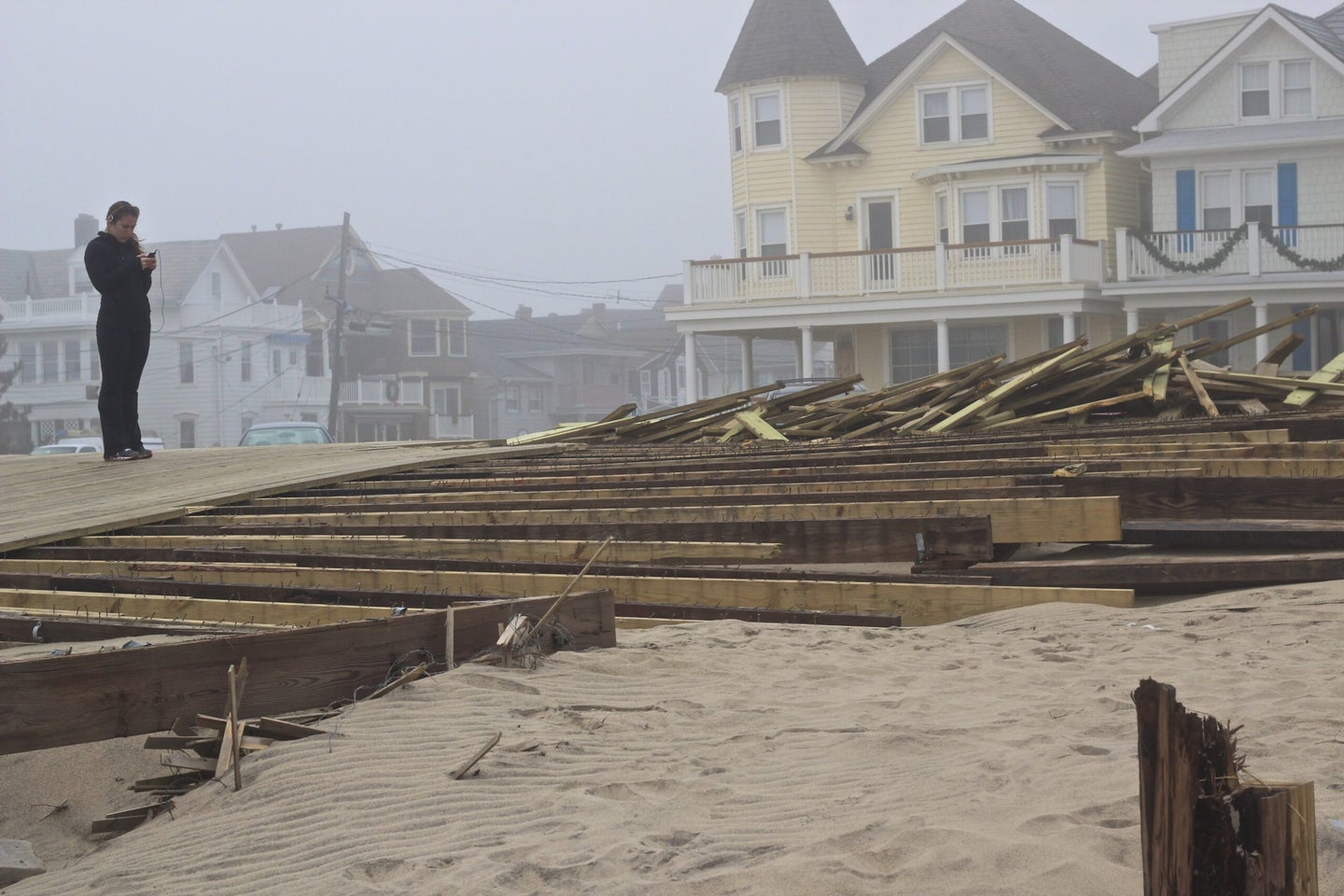 Hurricane Sandy tore through the east coast in 2012, killing 48 people, leaving millions without power, and causing billions in damages. On the coast of New Jersey, storm surges reach record heights, and hundreds of thousands of homes were destroyed.

New Jersey hadn’t had any major hurricanes in decades, notes Joanna Burger, a professor in the Environmental and Occupational Health Sciences Institute at Rutgers University—which probably made people less likely to prepare for the storm, or to take warnings as seriously. “Areas where they have hurricanes all the time, and people are more used to it, they know how to prepare, how to evacuate and where to go. In New Jersey, they had not had any major hurricanes like that in decades,” she says.

But despite the devastation caused by Hurricane Sandy, many people in New Jersey do not plan to take active preparations if another storm approaches in the future. Burger and her colleagues surveyed New Jersey residents about their responses to the approaching storm back in 2012, and how they planned to prepare for another hypothetical storm—and their results, published this week in the journal Disasters, found that only around half of people said they planned to prepare in advance of the next storm, and 35 percent said that they would not make any preparations.

In this study, Rutgers University researchers surveyed just under 600 people who came to health centers across the state for unrelated health appointments. Of the study sites, six were in the five counties most damaged by Hurricane Sandy. The majority of the participants rated their personal impact from the storm at a three on a scale from one to five.

Just over half of the study participants said that they would prepare for a future storm—but the actions that they said they would take to prepare ranged from simply gathering information to building an emergency kit. Around a quarter of the group that said they would prepare had no specific plans for how they would do so, and most people would only spring to action if a storm was on its way, not beforehand. People who had trouble accessing healthcare during Hurricane Sandy, though, were more likely than other groups to say that they were going to prepare for a future storm.

“[A] small portion said they were going to prepare, that they learned their lessons, and were going to get emergency kits and prescription lists together,” Burger says.

The small number of people who said that they had plans to make active preparations was surprising, Burger says. She thinks that reluctance might be for two reasons: To people who might have borne the brunt of the storm—with their house flooded and lives upended—the severity might make them think there’s no point in preparing. “It might be frightening, and hard to see how they could prepare other than leaving,” she says.

Others may see the storm as a one-time event, and think that there’s no need to think about another. “With an area like New Jersey, people were not prepared that a hurricane could be this severe,” Burger says. “But it’s easy for them to say, well, this will not happen again. I’ve lived my whole life, and never seen a storm like this, and this will probably be the one in their lifetime.”

That’s a problem, she notes, because the changing climate—which is making storms more frequent, and more severe—makes it likely that Sandy won’t be the only major storm in their lifetime. “Everyone in their own region is having an increase in what they’re vulnerable to,” she says. “Until they face that, people will say that it happened once and it won’t happen again.”

While this study was focused on New Jersey, the findings apply to other areas of the country facing other types of natural disasters: fires on the west coast, for example, or tornados in the middle of the country. If, after recovery from one disaster, people are reluctant to think about how they might respond to the next one, it’s hard for communities to build the resilience and knowledge they need to face the storms’ increasing frequency.

“It’s really important to study people’s perceptions of storms, and why they feel the way that they did, to get a better understanding of how to communicate information,” Burger says. “People forget, after a few months. They think it’s not going to happen again.”