NASA has a fine track record when it comes to winning space races, so it should come as no surprise... 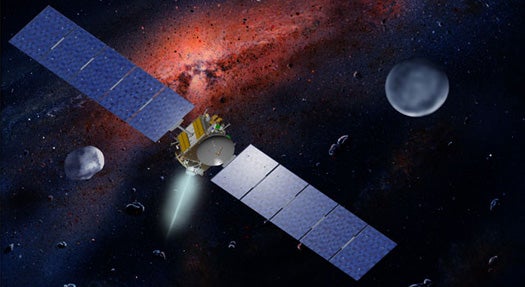 NASA has a fine track record when it comes to winning space races, so it should come as no surprise that the space agency’s Dawn spacecraft has set a new record for velocity change produced by spacecraft propulsion somewhere out in the middle of the asteroid belt. The Jet Propulsion Laboratory reported yesterday that the ion-propelled Dawn has accumulated 9,600 miles per hour of velocity since separating from its final rocket stage, setting a record for engine-powered spacecraft.

The new record eclipses the previous record for change in velocity held by Deep Space 1, which launched in 1998 but had its ion propulsion engines shut down years ago. By earthly standards, the build-up to Dawn’s record may not appear so exciting; it took the spacecraft four days to go from 0 to 60 miles per hour after separating from its final rocket phase (the numbers herein are all recorded after separation from the carrier rocket, as it wouldn’t be accurate to attribute to the ion engines the thrust from the initial rocket launch).

Why the slow start? Ion engines are incredibly efficient, which makes them well suited to deep space travel. Accelerating 60 mile per hour consumes a mere 37 ounces of the xenon propellant on board, and that propellant has to last. Dawn is expected to operate for eight or more years, and there are no refueling stations out there.

But by firing its three ion engines one at a time over 620 days — accumulating another 60 miles per each day — Dawn has reached its current astronomical speed and has no plans of slowing down. The three ion engines will log 2,000 days of operation over the course of the mission — a full five-and-a-half years of continuous service — creating a change in velocity of more than 24,000 miles per hour (and 3 billion miles traveled) by the time all is said and done. That won’t come close to touching the all time speed record in space — the Helios probes, aided by the Sun’s gravity, topped out at more than 150,000 miles per hour — but for an engine-powered craft that’s nothing to scoff at.

As for mission duration under powered space flight, Deep Space 1 gets to keep that record for another few months until Dawn eclipses that record as well on August 10. Dawn’s mission will take it to the asteroid Vesta in 2011 and 2012, and to the dwarf planet Ceres in 2015. Scientific data will start rolling in sometime in mid- to late 2011, when Dawn enters Vesta orbit.