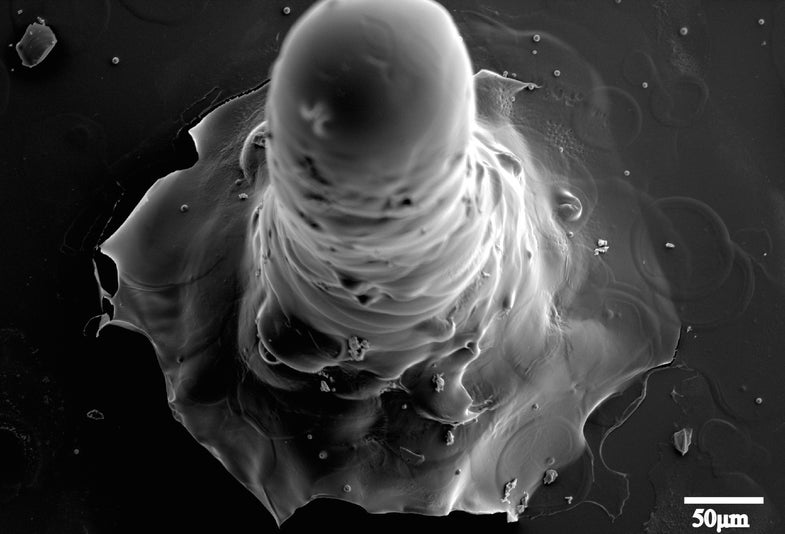 “Give yourself a shot of adventure!” That was the tagline of the 80s flick “Innerspace” about a miniaturized submersible pod injected into a man’s body. Ludicrous right? Well, it looks like technology may be catching up to at least part of the film’s nutty premise. Engineers from the University of Sheffield in England have developed a microscopic rocket that they say could one day be injected into the human body to deliver medicine or even locate cancer cells.

There have been other tiny rockets designed to “swim” through fluid (including human serum), but these new micro-rockets are smaller, safer, and cheaper to make, project supervisor Xiubo Zhao told Popular Science. They’re built using an innovative inkjet 3D printer that mixes liquid silk with an enzyme, the secret behind the tiny rocket’s thrust. When the enzyme-infused structure is placed in a fluid along with hydrogen peroxide for fuel, the enzyme reacts, creating oxygen bubbles that propel the tiny vehicle forward. The researchers were able to control the trajectory of the rocket by altering the location of the enzyme.

Zhao says that other miniature rockets have typically been built using polystyrene beads, carbon nanotubes, or metals–substances that aren’t very friendly to human tissue. But the silk and enzyme structure of his team’s micro-rocket is biocompatible. So unlike the macro-rockets that litter Earth’s orbit with space junk, these micro-rockets can simply biodegrade inside you.

Unfortunately for “Innerspace” fans, the micro-rockets aren’t quite ready for prime time. The hydrogen peroxide fuel used to create the rockets’ thrust is toxic to humans. “And you don’t want all those oxygen bubbles inside the body either,” Zhao says.

And though the rockets are just 100 microns in diameter (about the width of a human hair), that’s still to big to be injected into a person, he says, because it could get lodged somewhere and cause trouble. Perhaps when 3D printing technology allows for making rockets even tinier (nano?) rockets, it will be “all systems go” for in vivo launches.

Until then, micro-rockets may have applications outside the human body, such as testing for cancer cells in blood samples, Zhao says. Finding circulating cancer cells in blood can be tricky because there may only be a few per billion cells. “Imagine you have a billion people and ten of them are wanted [criminals],” Zhao says. “It’s difficult to find them, right? But if you have a car driving around, it might be easier to catch these people.” Similarly, the micro-rockets could cruise around a blood sample tracking down renegade cells.

So there may be some important missions in the near future for micro-rockets, even if they can’t blast off inside our bodies just yet.

Their results are published in the journal Small.