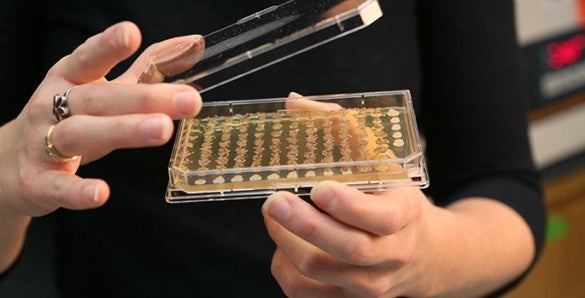 Humans could never have figured out how to get rid of potentially harmful bacteria without harnessing the bacteria themselves; when bacteria are under fire, they can create a special biological agent designed to eliminate their attackers. Now researchers from Vanderbilt University have figured out a way to pit certain types of bacteria against one another. The chemicals that result could be used to develop new antibiotics and treatments, according to a study published recently in ACS Chemical Biology.

Like in any other organism, a bacteria’s DNA contains the blueprints for the organism’s development and reproduction. But bacterial DNA also contains the code for chemicals called secondary metabolites, chemicals not directly related to the organism’s growth but still necessary for its preservation and longevity. Some bacteria use these secondary metabolites to defend themselves against attackers, and only produce them when they’re attacked. These are incredibly effective—many of the antibiotics and even some anti-cancer drugs widely used today are derived from these secondary metabolites. But in the past, discovering these chemical agents has been haphazard, only occurring when researchers stumbled upon bacteria already producing the chemicals.

Now the Vanderbilt team has created a way to put bacteria in a cage match, forcing them to fight for their lives so that the researchers can more easily extract the secondary metabolites. In the experiment, they pitted Nocardiopsis, a bacteria found in soil whose DNA indicates the ability to produce secondary metabolites, against four different bacterial challengers individually. When they used a special technique to analyze the resulting cultures, they found many more chemicals than would have been possible from the two bacteria alone, indicating that they had produced secondary metabolites. In the process they also discovered a new class of compounds that shows promising cancer-fighting properties when tested in a petri dish.

Using different combinations of bacteria, this technique could help researchers discover new antibiotics, which are very much in demand as more pathogens become drug-resistant. “In the past, we’ve experimented with a number of ways to get bacteria to produce their secondary metabolites, including poisoning them with antibiotics and exposing them to rare earths, but the fight club approach is the most effective method we’ve found, by far,” said study author John McLean in a press release.