Project Goa Will Bring Virtual Reality To Any Smartphone

And it's not made of cardboard 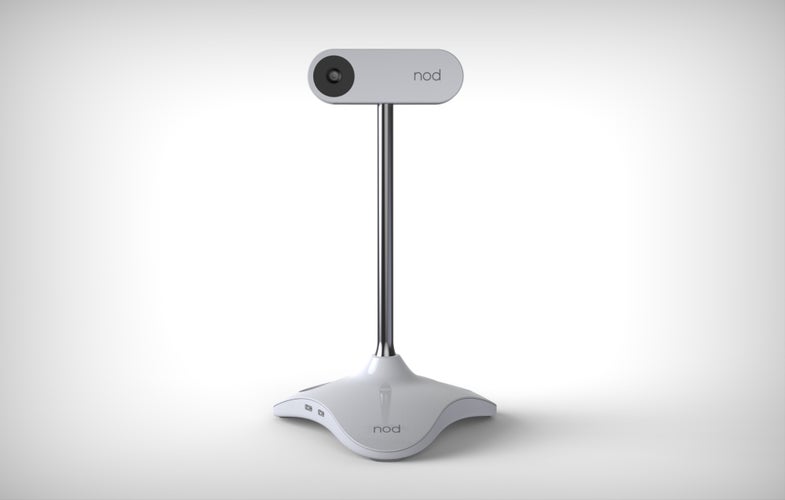 The Goa base and camera provide positional tracking and added processing, so smartphones are able to run better VR experiences. Nod
SHARE

While gamers and technophiles are abuzz about virtual reality headsets like the Oculus Rift, HTC Vive and Gear VR, these devices fall into two categories: either casual, low-quality experiences on smartphones, or high-end gaming that usually relies on expensive hardware.

Project Goa, led by Google veteran Anush Elangovan, wants to nail high-quality virtual reality for the average consumer, by making the smartphone-based experience better. Nod, the tech startup developing Goa, hopes to tap into the enthusiasm around VR to expand past gaming into applications like real estate, medicine, museums, and tourism.

Goa is a self-contained system that doesn’t require mounted cameras or cables. The console is a central base station with a tracking camera and a processor to wirelessly assist your smartphone. Two wireless controllers detach from the station to provide hand tracking and freedom of movement, much like the HTC’s Vive’s controllers. Your smartphone fits into a slot on a visor, which then attaches to the headset of your choice.

The console allows for full movement up to nine feet, and can be used with Oculus Rift or Google Cardboard or Gear VR and your smartphone.

“Goa is meant to bring the virtual reality experience to anyone who has a smartphone,” says Nod’s CEO Anush Elangovan. “You can leave the station on a coffee table and a family could sit around it.”

Though the company is small, Nod’s engineering team includes the former chief scientist of Oculus, Steven LaValle, and Christian Plagemann, the former co-founder of the virtual reality team at Google, now acting as an adviser. Rather than worry about Oculus or Google, Elangovan is betting that its focus on human and machine interactions and practical applications, rather than hardcore gaming or immersive cinema, will propel Goa. It also doesn’t hurt that Nod can move quickly as a small company, and doesn’t have red tape to crossover.

As with all of these newly launched virtual reality systems, though, Goa faces issues with the lack of content specifically designed for their experience. “On the technology side, we haven’t gotten to the point where we know the equivalent of 24 frames per second,” says Elangovan, drawing a parallel to the cinematography standard. “There’s not a standard that you can build on top of—in VR right now, there are 360-degree videos on one end, and intense gameplay on the other. That nexus hasn’t been defined or understood yet.”

Currently, the Nod team is working with immersive experience developers along the lines of the Vive’s Tilt Brush and Monument Valley, and has been approached by defense and CAD software companies. Older games, like Proton Pulse, and Cardboard-specific apps that supported the Nod Ring, the company’s gesture-based device, will work automatically.

Vision tracking, depth cameras, and smartphone hardware also have a ways to go before the technology can successfully support large interactive programs; smartphones in particular would need to be able to handle 60 frames per second and reduce latency. Though, this too, Elangovan believes, shall pass.

Goa will be released to developers within the next few months, and eventually, will bring it to the market at a more affordable price point of a few hundred dollars or less.

“The important part is getting it into people’s hands,” says Elangovan. “That’s what will spark the VR revolution. Until that happens, it’s going to be a niche product. As we reach the inflection point, that’s when it will take off like a rocketship.”