E3 2017: A casual gamer’s guide to all the cool new video game stuff

An updating list of what's coming out of the massive gaming trade show. 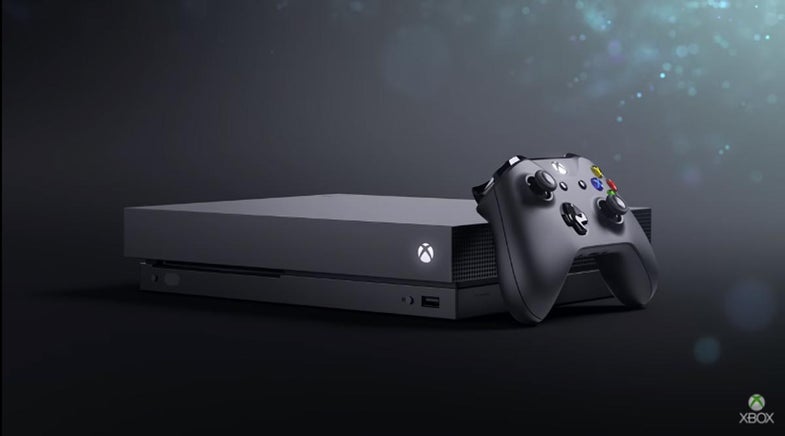 Every year, the video game industry descends upon California for E3, a trade show dedicated to all the new stuff happening–or about to happen–in gaming. Die-hard gamers can spend almost the entire week dissecting the coverage and analyzing the announcements. Some of us, however, are simply “casuals” who just want to know about the cool stuff coming down the pipe. We will update this page as cool new stuff is announced, so stay tuned here! [Note: Some of these games are rated M and are only meant for mature audiences.]

Microsoft has been teasing its new Project Scorpio Xbox for months, but it’s finally real, and it’s called the Xbox One X. Awkward name aside, the new $499 machine is crammed full of enough computing power to run some 4K games at 60 fps. It also has a liquid-cooled vapor chamber to keep it from overheating.

To really get the benefit of the upgraded Xbox One X, you’ll likely want to have a high-end system to surround it, including a 4K TV and advanced surround sound. Otherwise, you’re probably best sticking to the regular Xbox One S, which has gotten a price drop down to $249 to start.

Oddly, VR didn’t seem to make much of an impact at all on the Xbox Team.

There were no real updates out of the Sony camp about the PlayStation hardware, which isn’t much of a surprise since we already have the PlayStation 4 Pro. Some people were expecting a price cut there, but with the PS4 Pro already $100 cheaper than the upcoming Xbox One X, it may not be necessary from a competitive standpoint.

The Nintendo Switch is still very fresh, so there’s not a lot of big hardware news there. For a list of all the games currently available on Nintendo Switch, click here.

It’s hard to have an E3 without Mario showing his mustached face allover the place. This year, our favorite Italian plumber has some big news in the form of a 3D game in which he tries to stop Bowser from marrying Princess Peach. Honestly, the story doesn’t really matter that much because this seems like the perfect mix of nostalgia and tech from Nintendo’s latest console. Now, hopefully Nintendo makes more Switch consoles so people can actually find them.

One of the most highly-touted announcements from Nintendo (or anyone, really) of the show so far doesn’t even come with any gameplay footage. People love Metroid and it’s now officially coming to the Switch.

Nintendo really seems to know that its fans like familiar faces. The new Sonic game looks like a mix of 3D and side-scrolling action with a somewhat surprisingly serious tone.

I have always personally identified with [Kirby](http://amzn.to/2stUn3E/). He’s a hero, but he’s always hungry and that’s how I’d like to be remembered. This is Nintendo being Nintendo. It’s brightly-colored, has a happy soundtrack, and looks like it’ll be a blast to play with friends.

The Forza franchize, with its bevy of shiny supercars has always been a platform for Microsoft to show off what the Xbox can do. Forza 7 is no different, promising all sorts of intense graphics and textures running at the maxed-out 4K 60 fps resolution.

Skyrim is a game that seems built for VR. There are huge worlds to explore, missions to accomplish, and enemies to fight. The VR can make it so real, you’ll almost feel the arrow that hits you in the knee.

Life Is Strange: Before the Storm

If you have never played the original Life Is Strange game, you probably should. It’s not the typical shooter-style game that dominates the video game landscape. It will make you feel feelings.

If you live in the USA, you may not be that familiar with the Monster Hunter franchise, but it’s huge in Japan and the new version is meant to encourage cross-region play. The game will have a four-player cooperative mode that allows players to swap in and out. Nothing brings cultures closer together than swinging enormous swords at fantastic monsters.

God of War: Be a Warrior

One of the big franchises on the PS4 is getting a new installment in the form of a new God of War game. In this episode, Kratos tries to balance his love for chopping big monsters and being a dad. It’s both heart-warming and incredibly violent.

While most new games focus on hyper-realistic graphics, this quirky action game has the aesthetics of a cartoon from the 1930s. This game has been in development forever, but now has an official release date and it looks rather delightful.

Microsoft has Forza and Sony has Gran Turismo. This series has come a very long way since it dominated on the PS1 and will now look beautiful in upscaled 4K. There are fewer cars this time around, but an emphasis on the actual racing.

With all the time traveling that happens in the Assassin’s Creed franchise, it’s hard to keep track of where the real origins lie, but if this title is to be believed, you’ll find out while doing parkour all over ancient Egypt.

This Nintendo Switch title is the latest in a long string of semi-odd crossover games with familiar Nintendo characters. Apparently, this colorful game plays more like a turn-based RPG than an action game.

One of the most charming trailers to also include gratuitous violence comes from this adventure-style game based in the land of the Lord of the Rings. Watch that and tell us you don’t want to go hang out and do some quests with Bruz, the orc.

There has been relatively little talk about VR at this year’s E3 so far, at least from many of the big names, but the beloved Fallout franchise is getting some virtual reality love. It will be available on the HTC Vive in case you feel like diving deeper into a nuclear post-apocalypse.

We can probably expect a lot of peripherals to come rolling out of E3, and so far Logitech’s wireless gaming mouse setup is one of the coolest we have seen. The battery charges wirelessly from the mousepad so it never has to be plugged in. It works with both the G703 and G903 gaming mice.

If you’re a fan or collector of Nintendo’s fun little connected statues, you’ll have a few new options in the coming months. The wedding-themed figures will be timed with the release of the new Super Mario Odyssey game. Metroid figures are also in the works.