Dongle Me This: Why Am I Still Buying Apple Products? 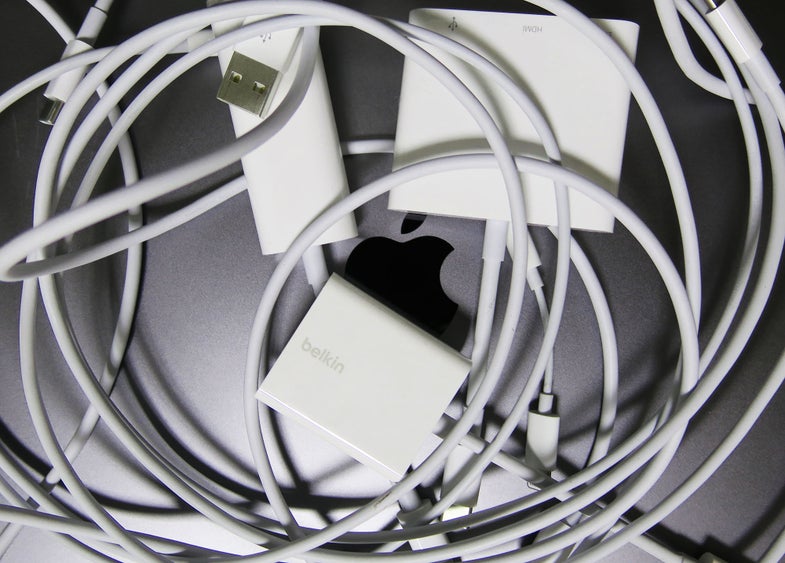 Sometimes the best way to get ao. "What's the deal with all of Apple's dongles?" you can ask everyone at the table. This one might be best for a Friendsgiving dinner, especially among people who are a bit more familiar with consumer gadgets. Even if it turns into an argument, at least it's a pretty harmless one that hopefully won't result in any hurt feelings, unlike the argument that might happen if your grandfather asks your cousin why he keeps putting off his grad school applications. Xavier Harding
SHARE

Since buying my first Macbook, I’ve upgraded my Apple devices at nearly every opportunity. Sure, I’ll buy your Lightning cable. I’ll switch to HDMI. Tell me more about the convenience. Point out again how intuitive it is. Remind me how Apple changed the way we use computers. MP3 players. Mobile phones. I pay more for Apple products because I want to buy into the future.

Even, I guess, a future that is littered with dongles.

There are now 20 varieties of dongle sold in the Apple store, which makes them one of the company’s most varied product offerings. If I upgrade my laptop, I’ll definitely need more than one. Some people will need more than three. The irony is not hard to grasp: I’ll be filling my life with dongles to stay relevant in a universe built on the promise of ease of use and slick design. Apple wants everything to be wireless—by requiring everything be attached to a 2-to-4-inch wire.

This isn’t the first time Apple has gone the dongle route, though the latest upgrades portend the donglepocalypse is nigh. At Apple’s “Hello Again” event on October 27, the company showed off the latest iteration of the MacBook Pro, sans almost all of the ports you’re used to.

It’s familiar territory. Apple loves getting rid of ports that are useful now in favor of those it determines will be useful in the future, and dongles are the obvious stop-gap solution. Floppy disks, FireWire, VGA, DVI—they all got killed off and replaced with electronic appendages. The problem now is there are more devices at play. Your laptop has to connect to phones, cameras, monitors, and speakers—and many gadgets require a separate, special dongle.

Apple sees a future where all of those things connect via USB-C, so they made a laptop that fits that vision. If every gadget you own uses USB-C, your new laptop could accommodate them all. That’s the future Apple is banking on. And the present? Apple’s VP of Worldwide Marketing even admits the company expects users will like the New Macbook—just not right now.

If I upgrade as usual, I forfeit the conveniences that made my suite of Apple products functional. When my roommate tripped over my charger, the MagSafe saved my laptop from crashing to the floor. I could easily transfer pictures from my DSLR to Photos to my iPhone. The HDMI from my Apple TV also connected my MacBook to my television. I could move my headphones from my phone to my laptop and pick up my podcast right where I left off. Everything integrated relatively seamlessly.

When I opt into the latest upgrade, I’ll buy a new cable to connect my laptop to external screens, plus a dongle for my phone. I’ll need another one to connect my iPhone to my headphones. And unless I want a new camera, I’ll need another dongle to read SD cards. The streamlined user experience that I once loved is going to disappear in a tangle of gangly attachments. There’s nothing convenient about having a separate tech bag to house all your converters. There’s nothing inherently innovative about nixing the fundamental features of your flagship products. No more HDMI or USB. No more SD card slot. No more plugging in my iPhone to my Macbook. No more MagSafe.

These losses are not accidental casualties in Apple’s war on ports, they’re strategic executions. Apple is expecting you to put up with the inconvenience until the rest of the world gets in line. When HDMI dies and USB-C thrives it will be in part because Apple bullied the market into making it so. Everything, eventually, will work the way Apple envisioned it, and until then we wait in dongle purgatory for the marketplace to catch up.

And yet I don’t stop buying, and neither do so many others. Macbook Pros are setting sales records and even if the iPhone 7 isn’t selling well, the wireless charging rumor could mean that people are holding off on upgrading until next year’s model.

Apple can afford to get rid of all the useful laptop ports. We’re going to buy it anyway and everyone else will adapt. Camera manufacturers will let you wirelessly transfer photos. Headphone companies will switch to Bluetooth. And when that happens, the integration will once again be seamless—for a year or two.