Plus, a new acronym 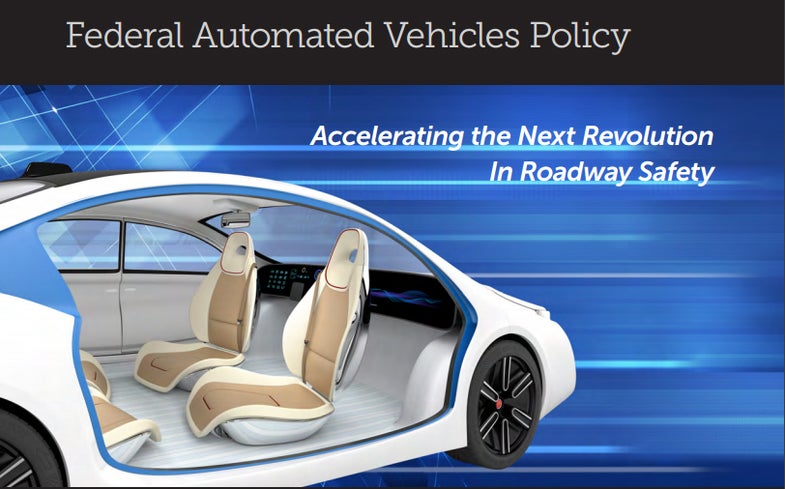 Yesterday, the President of the United States did something unusual. In an op-ed published in the Pittsburgh Post-Gazette, Barack Obama explicitly made the case for putting people inside of robots and moving them around. That is, he argued in favor of driverless cars, which is a less horrific statement of the same thing.

Self-driving cars, or autonomous vehicles, are in development from Google, Apple, and Uber, as well as others, and they bring the promise of perfect, more efficient travel, with cars communicating automatically to each other and deadly human error a thing of the past.

It is an exciting potential future, but if it’s to come to fruition, it needs rules. And, ideally, it needs one set of rules for the entire United States, so that a driverless car works the same in Montana as it does in Massachusetts. To that end, the National Highway Traffic Safety Administration, part of the U.S. Department of Transportation, put together an official “Federal Automated Vehicles Policy.” It’s 116 pages long. Where we’re going, we definitely need bureaucracy.

Here are the three biggest takeaways.

This is always, and will always, be about safety.

The subtext is that roads, even after a century of refinement, are still pretty deadly, and they’re deadly because of human failings. Putting automated cars in charge could change that. From the policy:

Government sees driverless cars as both inevitable and good.

The policy statement explicitly compares driverless cars (or, in the new government jargon, “highly automated vehicles,”) to seat belts and air bags. From the policy:

Liability for accidents could get weird.

The goal of the policy is to avoid having 50 different, competing sets of rules for driverless cars between states. Right now, when you’re traveling on highways between states, apart from speed limit changes, the roads are mostly interchangeable as long as all goes well. In the event of an accident, but in the event of accidents, the rules for liability vary state to state. To get everyone on board with driverless cars, states are going to have to come up with liability rules that apply to human occupants, and also ones that might apply instead to the company that made, programmed, and trained the driverless cars. From the Policy:

The full policy paper is a deep dive into the government’s first, best attempt at what, exactly, our roads looks like with autonomous vehicles doing the driving. While we don’t yet know what the future of driverless cars looks like, thanks to its technical nature of the policy, we can at least rest assured that it will at least have some of the same frustrating mundanity as it does today.