With efficient carpooling, the Big Apple could get by with a third of its current fleet 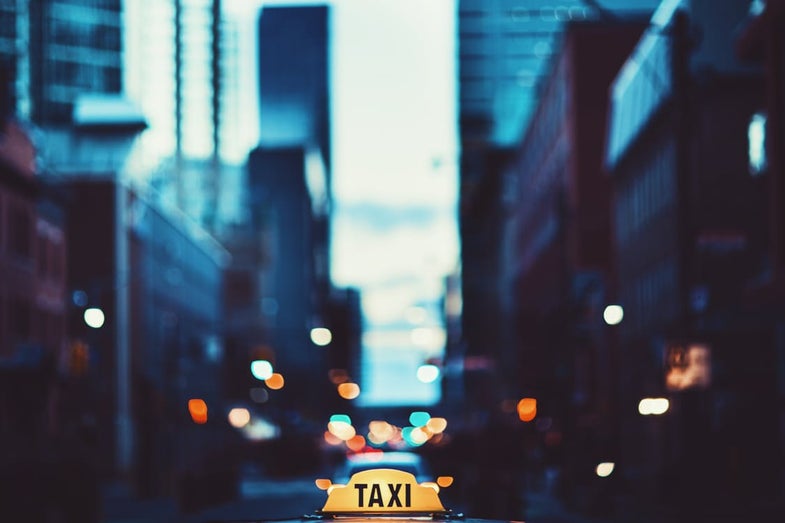 A personal car spends most of its time parked; an empty vessel awaiting brief bursts of purpose. A cab is a car that waits very little, as every moment of stillness is potentially lost income. Ride-sharing, the collective term for companies like Uber and Lyft, which facilitate the operation of personal cars as though they are cabs, turns waiting vehicles into moving, ride-providing ones. Uber and Lyft both offer carpooling options, turning one ride into several shared rides, with as little downtime as possible. With app-enabled carpooling in play, how few cars would it take to transport every cab customer in Manhattan?

A new study from from MIT’s Computer Science and Artificial Intelligence Laboratory (CSAIL) crunched the numbers and found that 3,000 ride-sharing cars could transport 97 percent of New York’s customers—with just one third the current traffic. And if carpooling was done with 10-passenger vehicles, just 2,000 vans could replace the 14,000 taxicabs in New York City.

The typical strategy for meeting travel demand is simply to put more cars on the road—when apps like Uber use surge pricing, the goal is offering higher payouts and thereby getting more drivers on the clock to meet spiking need. Yet traffic is a vexing problem, with more vehicles on the road making rides slower and more arduous. But with efficient route plotting informed by data collected by the ride-hailing smartphone apps, the CSAIL algorithm can plot a much more efficient path, grouping riders together and sending cars to areas with anticipated demand.

MIT fed the model with a publicly available dataset of taxi trips in Manhattan, taken from the first minute of May 5th, 2013, to the last minute of May 11th, 2013. That includes trips from 13,586 active taxis, with a low of 382,779 requests on the Sunday and a high of 460,700 requests on the Friday. The algorithm, fed a set of requests drawn from that data, matched passenger need to available vehicles, resulting in wait times of usually just a couple minutes, (with slightly longer weights if 10-passenger vehicles were used instead of 4-passenger cars). 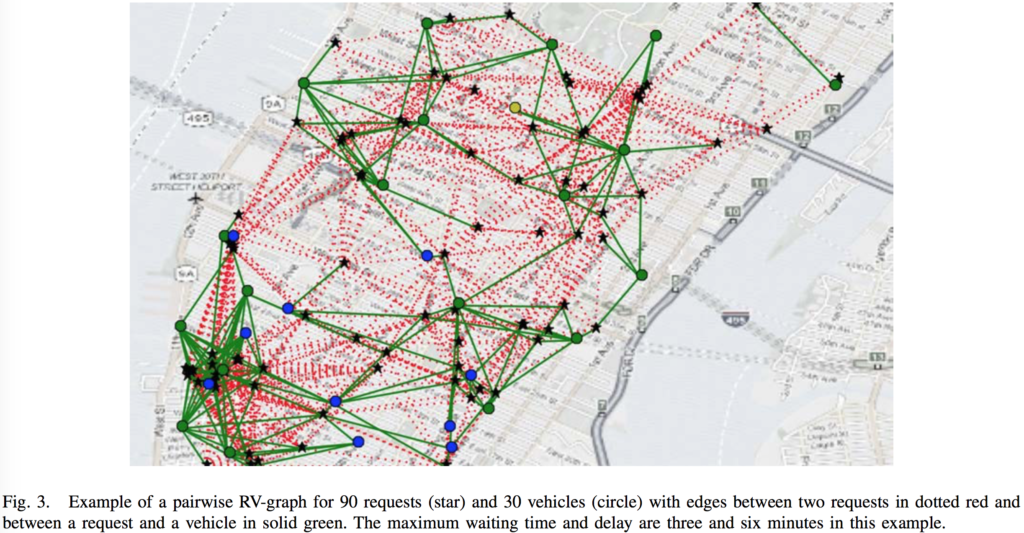 A new algorithm shows that efficient carpooling by ridesharing apps could reduce congestion in Manhattan.

Uber and Lyft function as ride-coordinating services for now, but the ultimate aim for the market is in autonomous, self-driving vehicles capable of picking up passengers and ferrying them about without a human onboard. Figuring out how to efficiently allocate existing demand for rides, especially via carpool, is one way to gauge ultimate demand for an autonomous taxi fleet. If carpooling can do it with 2,000 10-person vans, that’s easier than rolling out 13,000 self-driving taxis.

Of course, New Yorkers already have access to a fleet of high-capacity vehicles that make lots of stops for lots of different people along a mostly linear route. But hey, busses aren’t as sexy as autonomous robot cars.

Watch the simulation below: