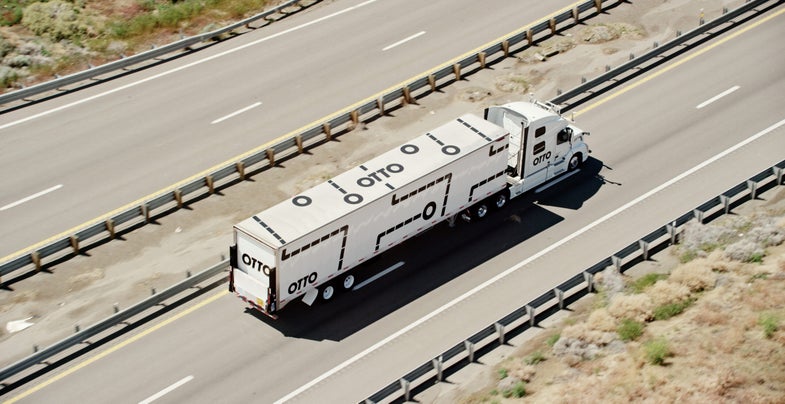 A truck is a means to get cargo from point A to point B. A truck is a home, a job, a frequent guest in small towns that straddle highways, a way of life, and the beating heart of several supporting industries, all designed to keep the truck and its human pilot running. A truck is expenses, a breakable machine controlled by a fallible human, subject to labor laws and rules about interstate commerce. A truck is all of those things, and it may soon be a robot, too.

Uber, the technology company (which, because of its ride-hailing app, functions a lot like a transportation company) launched Uber Freight on Monday night. The minimalist website features a gentle clip, filmed from above, of an 18-wheeler driving on a green hillside. There’s a place for carriers and shippers to give their email addresses to Uber, and links for media to contact the company. It doesn’t reveal much.

Fortunately, we already know a little about Uber’s freight launch, because its first autonomous truck delivered a load of cargo in October. The cargo was a load of beer, and the vehicle was operated by Uber’s self-driving division Otto (almost certainly a groan-worthy play on “autonomous”). The truck departed Fort Collins, Colorado and drove 120 miles south to Colorado Springs on I-25, the main artery that connects the two cities through Denver and links much of the mountain west.

“It’s like a train on software rails,” said Anthony Levandowski, co-founder of Otto. “When you see a vehicle with nobody in it, you know it’s very unlikely to get in a collision.”

This is the promise of all self-driving vehicles: sensors on automobiles see what humans can’t, and then act before human reflexes could hope to kick in, making roads safer for everyone. Earlier this month, the Department of Transportation set out a roadmap for cars to communicate with each other, to set the stage for self-driving cars that seamlessly flow in and out of traffic together. It’s a beautiful vision, one firmly anchored in a future removed from modern errors and accidents.

If only it were that simple. Earlier this year, a self-driving Google Car hit a bus. The first day Uber tested self-driving cars in San Francisco, people filmed those same cars running red lights. The technology is tough, and there is a lot of work to do, but these are routine driving challenges: seeing when it’s safe to change lanes, reading light signals. The future will likely be safer, but it will take time to get there.

In the meantime, Uber plans to keep humans in its trucks, and sees trucking as a growth industry. Licensing requirements kept humans in the driver’s seat in Uber’s self-driving cars, and certified commercial vehicle operators may be needed to monitor and manage paperwork for self-driving trucks.

One possible future sees humans crewing the first vehicle in a trucking convoy, with autonomous robots following the human-piloted leader. The United States Army is already testing a robot convoy system like this for operating in theater. In Europe and Nevada, robot trucks have convoyed together, creating uncomfortably close chains of vehicles, relying on computer coordination instead of following distance for safety.

In the immediate future, autonomous trucks will need human drivers and human engineers to design them—both growth opportunities. After the development of the technology, where will it go? If regulation is what keeps commercially licensed drivers in truck cabins, regulation could just as easily transfer that control to remote drivers in an office somewhere, who monitor the mostly-autonomous vehicles online. Interstates, the vast network of American highways that facilitate both commercial trucking and family roadtrips, could become commercial-only avenues with the open road left to autonomous vehicles instead. Instead of piloting trucks, the role of humans on board could shift to providing security, which is both a Fast and the Furious plot device and also part of the reason why the military wants to automate its own shipping. And there’s no guarantee that autonomous vehicles, which right now struggle with changing lanes at slow speeds or even seeing red lights, could handle high traffic, winter conditions, or sudden hazards like other vehicles exploding.

And these are concerns narrowly focused on the act of trucking itself. According to the Bureau of Labor Statistics, about 1.5 million people are employed as truck drivers. Industry groups place the number instead at around 3 million, with a total of 9 million people employed “in jobs that relate to trucking activity,” according to the American Trucking Associations. That’s a lot of people invested in the status quo, and Uber seems set to remove some of those jobs as dated inefficiencies.

“You’re going to save money by having real-time pricing,” Eric Berdinis of Otto told Business Insider. “Having a middleman who is essentially making phone calls all day long at its very core is not efficient.”

Autonomous trucking promises safety and efficiency even as it threatens jobs and the existing economies built around shipping. If done gracefully, and with careful thought, there’s a chance it could transform outdated jobs into new ones and leave minimal harm in its wake for those in the industry. If not, history is filled with struggles between workers and management as new technologies and laws change the existing way of doing business.

Update: A quote from Berdinis was originally misattributed to Uber CEO Travis Kalanick, and the date given for the beer shipment was incorrect. These have since been changed.