Juno Is Still Stuck In The Wrong Orbit Around Jupiter 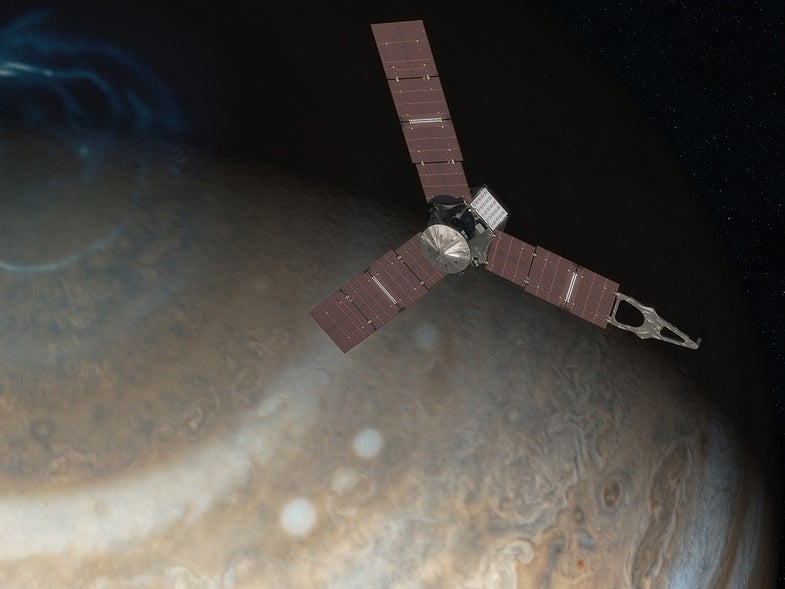 The spacecraft made a triumphant arrival to Jupiter last July 4 and promptly settled into a stable orbit. But now it’s having trouble getting out of that orbit.

On October 14, NASA announced it would postpone that week’s planned attempt to move Juno into a closer orbit in order to study the planet. NASA identified the problem as a pair of helium check valves that assist in firing the spacecraft’s main engines. Rather than opening in seconds, as they’re supposed to, it took several minutes for the valves to open during a test leading up to the planned engine burn.

The new orbit would shorten Juno’s trips around Jupiter from almost two months to about two weeks, allowing for closer — and more frequent — flybys. This “science orbit” was intended to be the spacecraft’s final orbit, the result of its final engine burn. After 20 months spent studying the planet, Juno would have plummeted into Jupiter and burned up in February 2018. The fiery death would avoid the accidental contamination of any potential life on Jupiter’s moons with our Earthly bacteria.

It’s not clear what the next step for the mission is. Juno’s next opportunity to enter its science orbit will be on December 11. But NASA recently confirmed that it would instead be a “science flyby.” Rather than settle into a new orbit, Juno will switch on all its instruments and point them at the planet to gather data, much like it did back in August.

After that, the next opportunities to enter a tighter orbit are February 2 and March 27, but NASA won’t commit to any of the dates until they have a chance to try and fix the valve problem.

If worst comes to worst, Juno will be stuck in its 53 day orbit for the duration of the mission. The mission scientists don’t expect this to be much of a problem, though. “We can do all of our science in a 53-day orbit if needed,” principle investigator Scott Bolton said during a recent press conference in Pasadena. It can collect the same data while in its more distant orbit, though the time crunch may mean collecting less of it.

Juno’s mission is to study the origin and evolution of Jupiter, our solar system’s oldest and largest planet by far, by probing the planet’s atmosphere, mapping magnetic fields, and examining its auroras with a plethora of scientific equipment. It’s also solar-powered, setting a new deep-space record for a solar-powered spacecraft.

It’s so impressive that we named it the most important aerospace invention this year, in anticipation of the scientific understanding it would provide of our largest planetary neighbor. Here’s to hoping a pair of pesky valves don’t deflate Juno’s potential too much.