Journal editor resigns after publishing "an incommensurable, trans-disciplinary, neologistical, axiomatic theory of life from quantum gravity to the living cell" 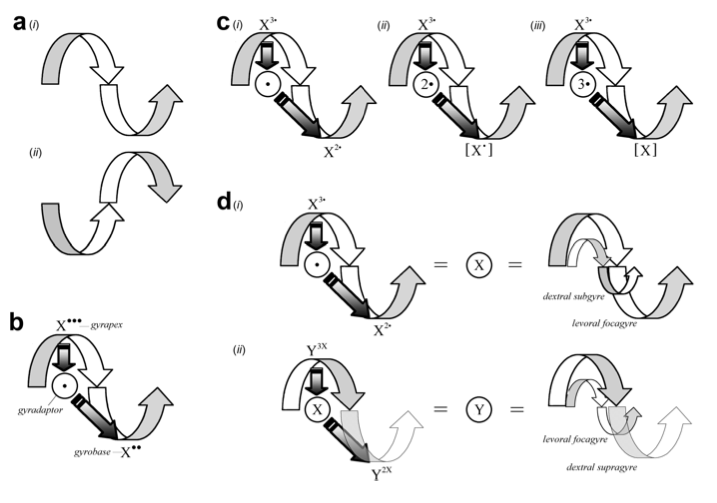 Erik Andrulis, an assistant professor of molecular biology at Case Western Reserve University, has published an article in a new peer-reviewed journal called Life. His “theoretical framework,” he says, “unifies the macrocosmic and microcosmic realms, validates predicted laws of nature, and solves the puzzle of the origin and evolution of cellular life in the universe.”

The paper lays out a completely new way of answering the most basic questions of our universe. “In this work,” it reads, “I have pursued and arrived at a scientific answer to the Schrödingerian question, ‘What is Life?'” That answer has something to do with “gyres.”

“The central idea of this theory is that all physical reality, stretching from the so-called inanimate into the animate realm and from micro- to meso- to macrocosmic scales, can be interpreted and modeled as manifestations of a single geometric entity, the gyre. This entity is attractive because it has life-like characteristics, undergoes morphogenesis, and is responsive to environmental conditions.”

The paper is impenetrably dense; making your way through its 105 pages (more than half of which are made up of an insane eight hundred citations) feels like hacking through an unexplored jungle with a machete. But it’s all about gyres. Planets are made of gyres (and thus sort of alive, sort of). People are made of gyres. Electrons are gyres. A gyre has a gyre inside it. I think. There’s not really any testable science in the paper; there are no proofs or experiments or really any evidence at all. But it sure is grandiose. This is one of my favorite lines: “I refer the reader to the Theory section for a complete presentation of theoretical answers to many of science’s most challenging questions.”

We see weirdo papers at a pretty regular clip, but usually they’re pretty easy to pick out. If we’re linked to a paper written by someone affiliated with no academic institution, published in the web-only, non-peer-reviewed Steve’s Journal of Flying Saucers and Also Climate Change Is a Conspiracy, we can pretty well expect that what we’re going to get might be a little suspect. But Andrulis works at the very well-regarded Case Western, has published several comparatively sober papers on ribonuclease and its interaction with living cells, and Life, though new, has a bunch of respectable academics and scientists on its editorial board. At least two peer reviewers accepted the paper for publication.

Life‘s editorial board seems as surprised as anyone else at the content of this article; Stephen Mojzsis, a geochemist at the University of Colorado, resigned from the board in response.

I spoke to another member of the board, who wished to remain unnamed, and he said he had not read the paper before publication. (The editorial board members are just volunteers, not full-time editors.) The board member seemed, through his concern that the paper would undermine serious study of the origin of life, a little amused, and not entirely convinced it’s not a hoax. “If it wasn’t for his one ‘Ohiogyre’ definition, I’d be convinced it was a case of him really thinking he contributed something phenomenal,” he said. “But ‘Ohiogyre’? Really?”

Case Western, which had published a glowing, uncritical press release announcing the publication of the article, took it down. Ars Technica and others have questioned how the review process might have gone wrong.

Dr. Andrulis wasn’t available for comment; the university’s press-relations person gave me the runaround and then abruptly informed me that the professor was due to leave for vacation in just a few hours. But the paper can be read here, in its entirety, for free.