The Microbial Economics of Cheating in Cystic Fibrosis 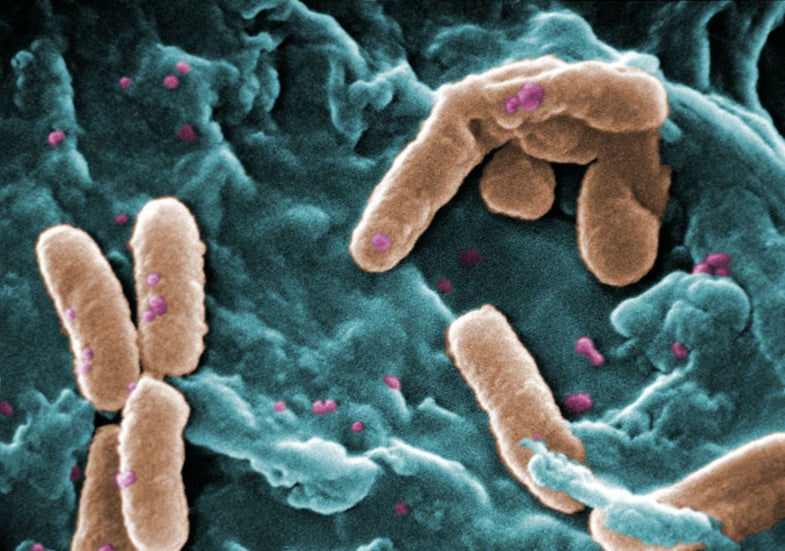 For bacteria, the environment is akin to a free market society. The various species work either in tandem or competition to seek out and utilize raw materials – nutrients – and employ various economic mechanisms to ensure survival in case of a change in the dynamism of supply and demand.

A prime example of theory-turned-practice occurs in the bacterial group known as the pseudomonads. These bacteria need iron to survive but they cannot simply take it into the cell. It has to be helped in. To do this, they use a variety of molecules including pyoverdine. It’s a fluorescent pigment and can be found in many species including Pseudomonas aeruginosa. It binds iron and facilitates entry into the cell thanks to a receptor, commonly called Fpv.

When P. aeruginosa cells are working together, they all produce both pyoverdine as well as the receptor. But making pyoverdine is a costly affair and requires quite a bit of expenditures. From a cellular manufacturing perspective, it’s not an optimal process to encumber. Some of the bacteria in the population realize this and tend to shut down production of this molecule. However, they do not stop producing the receptor. This effectively is cheating as these members of the community are no longer contributing but continuing to profit from others making the chemical. Society becomes imbalanced and could possibly be left unable to thrive.

In the lab, this may be nothing more than an interesting phenomenon of microbes imitating human behavior. But P. aeruginosa is also a well-known opportunistic pathogen, and has been continually found in patients suffering from cystic fibrosis (CF). It is not only a persistent infection, but it also can be difficult to treat with standard antibiotic therapy. In light of this concern, other routes for treatment are continually being sought to improve management of the bacteria but options are relatively sparse.

Because part of the goal in helping CF patients is to destabilize and kill pseudomonad colonies, using cheaters could possibly offer a direction for therapy. Last week, a European team of researchers examined this concept in cheating behavior. They honed in on pyoverdine and its receptor in the hopes of observing the cheating in real time and also how the rest of the population responded. What they found was not a destabilization of the colony but rather, an interesting path mimicking one in human economics.

The group looked at over 500 cultures of bacteria collected by a Danish Cystic Fibrosis Center. Many of the samples were collected from the same patient over time. This offered a chance to observe some 240 years of infection. The bacteria were grown in the lab and then checked for production of both pyoverdine and its receptor. The researchers also looked at the genetic elements within the bacteria to detect any mutations.

Once the observations were complete, the team went back to look for any associations between time and the presence of molecule and receptor. The goal was to determine if any shifts in production and/or mutation had arisen over time. If all went well, the team would find a loss of pyoverdine and a small reduction in receptors.

When they looked at the results, they found the expected loss of pyoverdine. The reduction also correlated nicely with time. But this wasn’t all good news. When the team examined the receptor, it also went down. The decline was slow at first but then, after a few years, seemed to speed up. Instead of developing instability, the cells somehow figured out how to stop the cheaters by signalling a need to drop the receptors. If the entire community wasn’t pitching in, the system was destined to be lost.

For the authors, this result uncovered a rather strange form of social economics. The cheaters literally drove the entire population to restrict and then eventually give up on pyoverdine. Despite the loss in iron, the overall energy expenditure for an inefficient system was simply not viable. This process is akin to incentive constraints in the human context. This practice slows down or stops production of a certain good to maintain competition in the environment. But there is a catch. If competing is troublesome financially, then the option to give up on the good can come into play. This has a rather nasty impact as those hard-working manufacturing members of the community find themselves in a loss position as demand on the product dries up. In the case of the bacteria, the incentive, pyoverdine, ended up being limited due to cheating. As the situation did not change but worsened, production of the molecule was simply shut off despite the needs of the colony.

In the context of treatment, this unexpected practice of incentive constraints may offer some hope. By speeding up the loss of receptors, the population could become less able to use iron and possibly more susceptible to antimicrobial treatment. The authors did not test for this but the option may be used in the future. Granted, while this may not clear an infection, it could significantly decrease its impact on the lungs and increase breathing efficiency. For sufferers of CF, this potential outcome may be well worth the effort.