What You Need To Know About The EpiPen

Why is everyone talking about an injector? 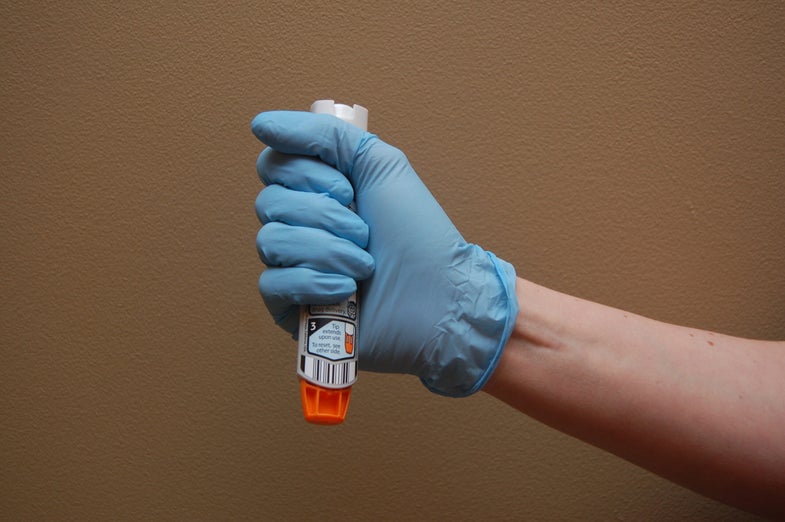 If you have a life-threatening allergy, you’ve probably been prescribed an EpiPen to use in case of emergencies. You might keep it in your purse or at your office and not given it a whole lot of thought—that is, until this week, when the name “EpiPen” has been all over the news. Here’s what you need to know about the latest drug pricing scandal that affects some 3.6 million Americans carrying the medication in their daily lives.

What is an EpiPen, exactly?

EpiPens are pen-shaped devices containing a drug that can prevent patients with severe allergies from going into anaphylaxis, an extreme reaction that can cause swelling in the airways, which can lead to unconsciousness or even death (antihistamines are the drugs that treat low-grade allergies like hay fever). The pens contain epinephrine, otherwise known as adrenaline, which relaxes the muscles and opens up the airways, allowing a person to breathe.

If you’ve ever seen someone go into anaphylaxis, it’s pretty scary. But if they have an EpiPen, they can self-administer lifesaving medication—the patient pulls off the cap, then rams the needle into her own thigh. The drugs enter the blood stream immediately, kicking in within 30 seconds. But the drugs in an EpiPen aren’t a cure for anaphylaxis—they typically wear off after 10 to 20 minutes, so an EpiPen is really just a way to buy time while a patient seeks medical attention after a severe allergic reaction.

What are people so mad about?

There are alternatives to EpiPens that contain the same active ingredients, but because they have a slightly different chemical formulation, most doctors don’t prescribe them as a substitute (last year, a true generic to the EpiPen wasn’t approved by the FDA).

Since 2007, the price of two EpiPens (they are now exclusively sold in packs of two) has risen from about $100 to more than $600, a price hike of more than 500 percent. Patients with a high health insurance deductible bear the brunt of that cost. It’s so pricey that some EMTs and firefighters are using standard syringes instead of paying for an EpiPen.

At the same time, salaries for executives at Mylan, the company that started selling EpiPens in 2007, have skyrocketed—Heather Bresch, the CEO of Mylan, saw a bump in her salary from $2.5 million to $18.9 million in that same period. Bresch says the price hike was necessary for Mylan to recoup its investment in public awareness campaigns and lobbying for EpiPens to be available to students at school. But critics have called the price hike “opportunistic.”

This comes at a time when soaring drug costs have come under particular scrutiny from the press and from the government. In February, “pharma bro” Martin Shkreli came under fire for raising the price of Daraprim, a pill to combat a serious parasitic infection, from a few dollars to more than $700 a pill; in April, pharma giant Valeant took flak for jacking up the cost of several drugs. It’s because of companies like these that are abusing their monopolies, the logic goes, that the American healthcare system is by far the most expensive in the world.

Where do we go from here?

Faced with so much bad press, Mylan has relented on the cost—the company is offering vouchers to reduce the amount that consumers are paying out of pocket. But many critics aren’t satisfied. One, writing for the L.A. Times, notes that voucher programs like these actually keep the drug prices just as high—even though consumers don’t have to pay as much, insurers and government programs (schools are federally mandated to make EpiPens available to students that need them) will still have to fork over the high cost. That’s why policymakers and members of prominent medical societies are calling for Mylan to lower the cost itself, something the company does not yet plan to do. As the fervor around the price hike continues and its stock continues to plummet, Mylan may be left with few options.