Therapeutic device could be effective treatment for paralysis 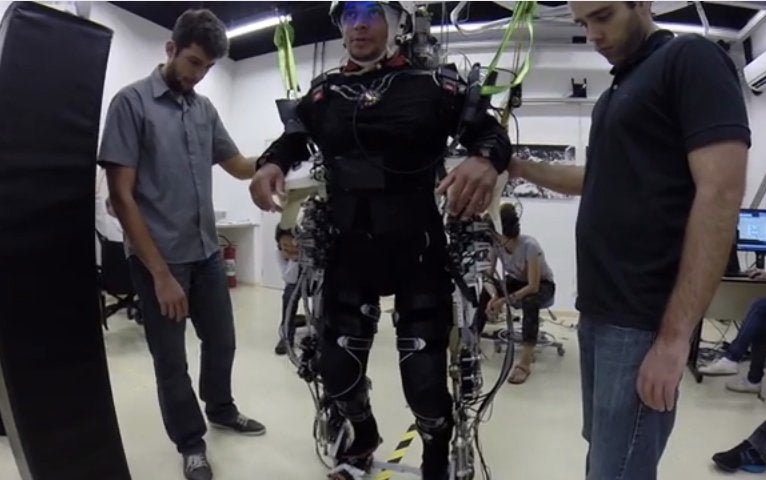 Today, publishing in the journal Scientific Reports, a group of researchers working with paralyzed people showed that by using a non-invasive device called a brain-computer interface (BCI), those individuals were able to regain partial movement and muscle control. This achievement is the first time that completely paralyzed individuals who had never shown improvement before were able to restore movement through long-term treatment with a BCI.

Researchers say this shows that paralyzed patients see benefit from long-term training with this device, potentially yielding a significant, permanent improvement in their quality of life.

A brain-computer interface provides a direct connection between brain activity and a computer or external device. The basic idea is that people can use their brain activity or thoughts to tell the computer what area of the body they want to move.

Miguel Nicolelis, who led the research, has been studying the use of these devices in paralyzed patients for years. Partially funded through a non-profit organization called Walk Again, his project’s main goal has been to understand whether the use of these devices, both in the short and long term, can help paralyzed patients regain sensations and muscle control. His first big achievement was in 2014 at the World Cup in Brazil where a paralyzed person, who previously didn’t have control of his legs, kicked the first kick of the game using a BCI connected to a full-body exoskeleton.

From then on, Nicolelis and his team have been studying its long-term use on paralyzed patients.

Previous research on using BCI devices, including Nicolelis’ proof-of-concept one at the World Cup and others done at UCLA, have allowed paraplegic individuals to walk short distances typically while inside an exoskeleton suit. What differentiates this one is that its being used as a therapeutic device, in which the training will potentially allow for patients to regain some muscle control they lost even when they are not inside the robotic suit or have the BCI on.

For this study, the researchers trained eight patients with spinal cord injuries (seven of them had no movement below the area of injury) to use a brain-controlled exoskeleton as well as a virtual reality-based BCI. They trained for one hour, twice a week.

The theory behind this training, according to Nicolelis, is that despite there being a significant loss of nerve function at the area of injury, the original injury didn’t destroy all the nerve fibers in that area. If they could use the BCI training to stimulate those still-workable fibers, then the patients could regain some movement.

The standard thinking in the medical world, Nicolelis says, is that after injury, if a person does not show any clinical improvement within one year, then they are likely to remain in that same state for the rest of their lives.

“But what we are showing here is that that may not be the case,” he says. “If you move fast on these patients and use the correct type of rehabilitation therapy, you may be able to give them back some neurological functions that may be useful for improving their quality of life dramatically.”

Over a course of 12 months, every patient was able to gain at least partial recovery of muscle movement or sensation, a surprising result, according to Nicolelis. “We certainly had in mind that a plateau would happen and we thought it would happen a lot sooner.” He says that now, instead of making further predictions about when the patients will stop improvements, he is simply going to continue the training and seeing what happens. Jokingly, he says, “I have been wrong three or four times before, so now I am just going to shut up and wait.”

In the future, Nicolelis wants to see what this type of training will do not only for paralyzed patients but also for stroke patients who, with a similar theory to the paralyzed patients, may be able to regain partial recovery in the injured brain areas as well.