Getting Smart About Melanoma 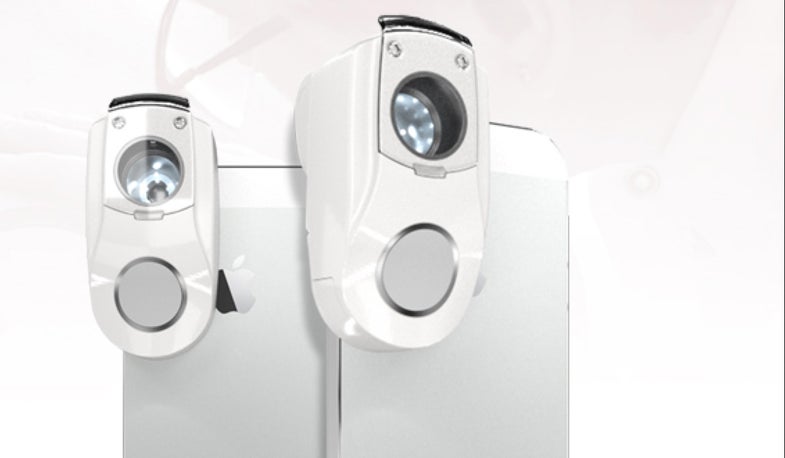 With a mini-microscope that attaches to your smartphone, MoleScope could help your doctor check your weird blemishes faster and easier. MoleScope/ Screenshot
SHARE

It took all of two seconds for the dermatologist to look up at me from her special magnifying scope to tell me that the mole on my left calf had to go. This was two days after my leg began to itch and what I thought was a bug bite actually turned out to be a dark mole that was bleeding. Moles shouldn’t bleed.

Coincidentally, this happened right after the CDC reported that the rates of melanoma, the deadliest skin cancer, have doubled in the past 30 years. Thoroughly freaked out, it only took me a few days from spotting the mole to stepping into a dermatology office. But in some places this isn’t so easy. In Canada, for instance, a patient can sometimes wait up to six months before seeing a specialist, according to the Canadian Dermatology Association. To fix this issue, Maryam Sadeghi, CEO of MetaOptima developed MoleScope, a new smartphone app for monitoring skin lesions.

The app, which was just announced at the World Congress of Dermatology conference in Vancouver, is a departure from previous melanoma apps because it comes with a mini-microscope that attaches to your smartphone, much like the “dermascope” that a dermatologist would use to check out a mole. This allows the user to take higher quality pictures of the mole to archive and send to a dermatologist for evaluation. The company is launching a pilot program on June 22 where the app will be used at 10 different centers around the world. Dermatologists and general practitioners will use the app to create a more direct line of communication with high-risk patients.

“Melanoma is something that needs to be identified in a timely matter,” said University of Pittsburgh dermatologist Laura Ferris, who isn’t involved in the MoleScope project. “The key thing is that there is a physician in the loop.”

Other apps like MoleScope that allow users to get smartphone photos of their moles evaluated by a remote dermatologist have been up to 98 percent accurate, according to a 2013 study published in the journal JAMA Dermatology. With its mini-microscope and an image-enhancing algorithm, MoleScope wants to work with dermatologists to increase this sensitivity even further.

“Melanoma is something that needs to be identified in a timely matter.”

Even still, MoleScope won’t replace your doctor…yet. “It will be possible, but it is not possible now,” said Sadeghi. “What we can do is bridge the gap.”

Past melanoma apps such as MelApp–which is no longer on the market–used an algorithm to analyze the morphology of the mole to diagnose whether the lesion is high-risk. However, this type of approach is not very reliable, according to a study published this month in Journal of the American Academy of Dermatology. Some apps that use this technology could only distinguish pictures of high-risk lesions with 30 percent accuracy at best.

“There’s danger in a patient having false security,” said Doug Grossman, co-author of the study. “We’re not recommending these to any of our patients.”

Exactly how the FDA will regulate health apps is still vague, said Grossman, so people should be wary of any app that claims to diagnose a disease. Since MoleScope is more for communication than diagnostics, it does not need to get approval by the FDA.

I’m too much of a hypochondriac to leave my health up to an app, but the idea that I can get a suspicious mole checked out by my dermatologist quickly, remotely, and with greater accuracy–even if it’s not bleeding–is reassuring.