How your body marks invaders for later destruction 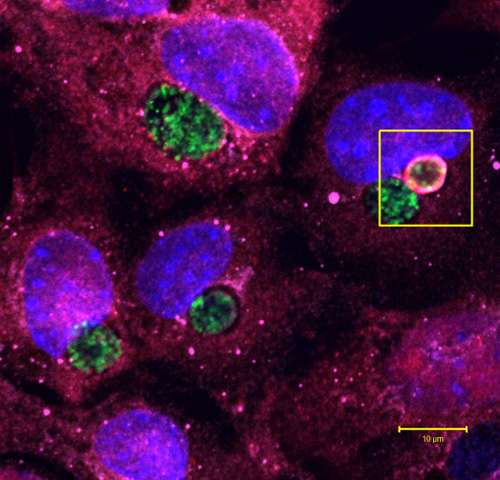 Your immune system is constantly on the lookout for pathogens trying to infiltrate the body and cause disease. In an effort to understand how the immune system knows which ones to attack, a team of researchers discovered a special protein that immune cells use to tag pathogens that other cells later destroy. The study was published yesterday in PNAS.

When pathogens invade the body, they first creep into host cells, cloaking themselves in the cells’ plasma membrane as a disguise. Eventually, though, healthy immune systems find them, out of the millions of cells in the body. Antibodies then attach special proteins to the cell membranes of these pathogens so that other cells called phagocytes can destroy them. But researchers didn’t understand how the immune cells tagged these pathogens.

In the study, the researchers tested the pathogens that cause chlamydia and toxoplasmosis, looking for the proteins that would act as the “kiss of death.” The researchers coated them with cytokines, which puts the immune system on alert. Then, using a special red dye, they identified the tiny protein they were looking for, called ubiquitin, ringing the outside of the cell membrane. The researchers also discovered that particular strong strains of these pathogens contain additional cloaking measures so that they can avoid being tagged with the ubiquitin.

In future studies, the researchers hope to better understand those pathogens most adept at sneaking past the immune system, according to the press release. But another interesting avenue would be to understand why the immune system sometimes ends up mistakenly attacking its own cells, like in allergic reactions or autoimmune diseases. If researchers know what causes the immune system to trip up by reacting not enough or too much, they can develop treatments to recalibrate it and help patients stave off the sneakiest of diseases.