On The Farm, Algae May Be The New Corn

As corn supplies dry up, green stuff from the sea could feed livestock 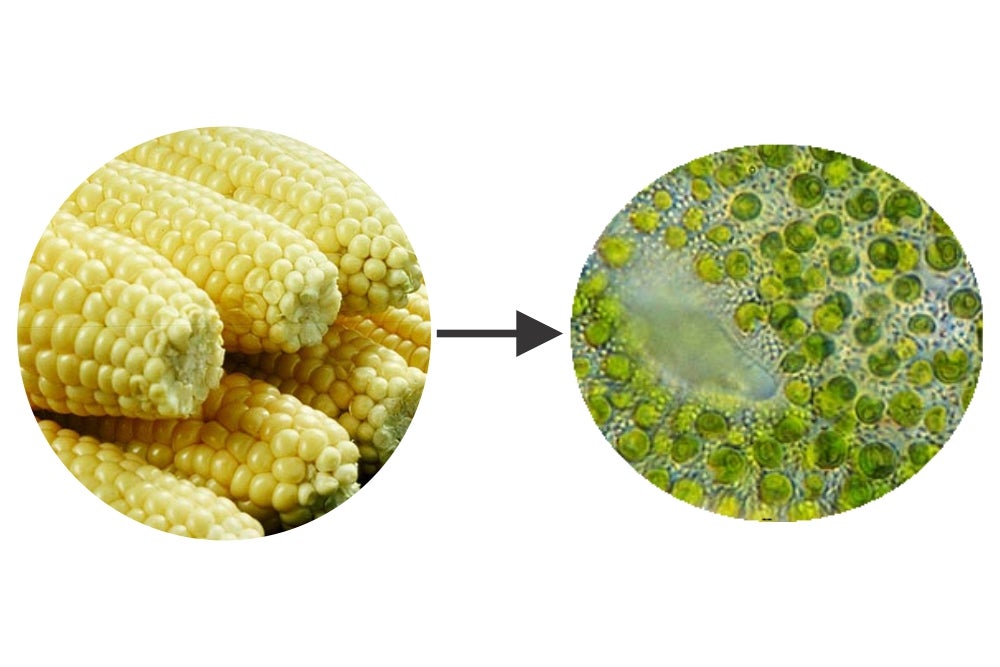 Nothing quite beats the taste of corn of the cob in summer or the delightful yellow offering of a true succotash. For centuries, corn has been a staple in North American diets and continues to be a primary choice for meals whether in its native form or processed, such as corn flakes.

But corn has seen a decline due to a number of factors. Crops have been hard hit by climate change. Higher temperatures have led to decreased yields and less overall abundance. As a result, the value of corn has dropped since 2012. This has put additional pressure on farmers, suggesting they may have to forego corn and look to other crops to maintain viability. This could harm corn stocks and hinder food security.

There may be an answer to the corn dilemma, but to find it, one has to look not in the prairies but the sea. Within the salty brine are algae. These microorganisms, once believed to be primordial plant species, are nutrient-making machines. They are known to produce high levels of antioxidants and also a variety of essential fatty acids. Some companies have even seen their algal-derived products make it to market.

But extraction may not be the only benefit behind these waterborne creatures. The use of the entire organism as a food source has been suggested for decades. Back in the 1960s, trials of algae-based diets revealed the idea wasn’t all that bad. They were nutritious, provided all the right dietary ingredients. Their bitterness shocked at first, but was eventually tolerated.

Little has been done in the last five decades as there have been few reasons to explore this option. But the decline in corn has once again raised the algae idea. This time, however, the target isn’t humans but livestock.

The use of algae in feed has been tested sporadically with fairly good results. In cattle, algae helped to increase the level of essential fatty acids in milk. In sheep, overall health improved. Even chickens seem to gain some benefit from algae in their feed. The idea has become so popular there is a push to develop policies for their inclusion in all forms of agriculture.

Despite the overall improvement of animal health, algae have traditionally been seen as a supplement rather than a major constituent. But that may change thanks to an American team of researchers. Earlier this year, they published a study in which they used algae as a replacement for corn. The results showed these microorganisms may one day help to improve food security by keeping corn out of animal feed and keeping it solely for humans.

The algal mass was mixed with soy hulls and hay to make an appetizing mix for the steers. The group tested varying concentrations of the algal supplement in combination with lower levels of corn or wet gluten from corn (a byproduct of distillation). In the most extreme condition, the algal mass was 45% of the feed with corn being only 16%. In the gluten experiment, the ratio of algae to the wet mass was 45% to 35%.

At first, the team conducted experiments in the lab to determine whether the new diet would be actually digestible. It was. This allowed them to continue the experiments with the steers. They tested a variety of factors including actual dry mass consumed including crude protein and fiber levels as well as daily weight gain.

The experiments revealed the animals didn’t mind algae but they have their limits. When the algal concentration was 30%, they ate it up readily. When the concentration was 45%, however, they were less likely to choose the meal. This wasn’t a hit on the algae but rather how it was made. In this study, the algal mass was dried and de-oiled, making it very dry. For the steers, this might have been a little too dry for their tastes. By adding water to the mix, the amount of food consumed increased. In the gluten experiments, because moisture was already present, this dietary preference wasn’t observed.

As for the nutritional value, weight gain was comparable to corn save for the 45% algae option. In this case, the animals did better than those fed solely corn. The most benefit from the algae came when it was mixed with the wet gluten. This suggests the two could work together to improve nutrition for the animals.

The authors suggested the results of this study offer a viable option for reducing if not eliminating raw corn usage in feeds. The results show steers can do quite well with algae and the waste from corn distillation. This could help to reduce the strain on corn supplies and leave the raw food for more human purposes.