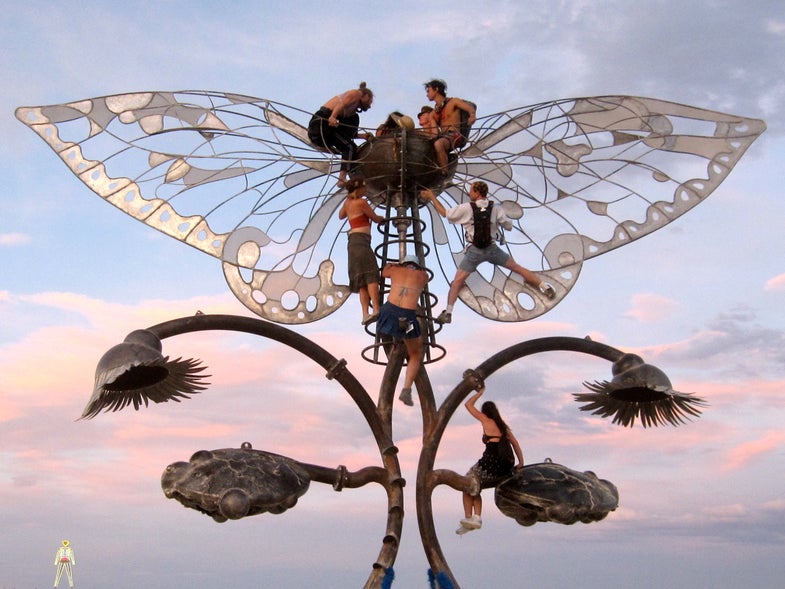 Last week, the Internet erupted with the news that insects had descended like a plague on Black Rock City in the Nevada desert, where organizers have been hard at work preparing for the descent of an expected 70,000 burners at the upcoming Burning Man Festival.

Then, just like that, the bugs were gone, following the Burning Man mantra: leave no trace.

Before the insects disappeared, however, media outlets had their say. The bugs were “disgusting,” “grotesque,” and “super gross.”

This sort of reaction isn’t exactly surprising. I’ve written before about our complicated emotional reaction to insects, from swarms of grasshoppers to biting bed bugs. Grasshoppers aren’t particularly scary, but a swarm of thousands can be overwhelming; bed bugs aren’t known to spread disease, but that doesn’t stop our horror at the thought of being bitten while we sleep. When it comes to creepy crawlies our rational side makes a quick exit.

So what about the bugs at Burning Man? What were they and what were they doing out in the middle of the desert? And is it fair to call them super gross?

According to May Berenbaum, an entomologist at the University of Illinois at Urbana-Champaign, the large green insects in the photographs are likely some sort of stink bug, possibly from the genus Chlorochroa, while the small winged insects are likely seed bugs, from the genus Nysius.

Beyond that, it’s hard to pinpoint the exact species based on photos alone, she says: “To get a specific identification, in some groups you actually have to look at their genitalia. Which is not going to happen even at Burning Man.”

Both stink bugs and seed bugs are plant eaters, which may be why they appeared out in the desert in such large numbers. Recent rains have reportedly driven desert blooms, which in turn attracted the bugs. “When the bottom of the food web is thriving, then any layer above that is thriving as well,” Berenbaum says.

For us, both insects are pretty much harmless, if not always pleasant. Stink bugs can be a nuisance because, as their name suggests, they stink. The bugs emit aldehydes and other smelly organic compounds as a defense to ward off predators (or when humans at, say, a certain desert event try to slap the bugs away with their hands). Seed bugs can also be annoying if you’re caught up in one of their swarms. Some reports from Burning Man suggest that the seed bugs have been biting. According to Berenbaum, though, this is just a case of an “optimistic gamble.” When the bugs encounter people—an unusual thing out in the middle of nowhere—they may be testing out the skin to see if it’s actually a tasty plant.

In other words, these bugs aren’t doing anything disgusting or weird. They’re just doing what they normally do, which is to find food and survive. The crowd of folks setting up for Burning Man simply got in the way.

The Great Burning Man Bugpocalypse of 2015 isn’t the first time insects have emerged in unusually high numbers this year, inadvertently disrupting daily human life. In June, “nightmarish” swarms of mayflies closed bridges in Pennsylvania. The same thing happened the next month in Iowa. And last spring, a swarm of bees shut down a training game between the Royals and the Angels in Tempe, Arizona.

Our relationship to insects often has to do with which ones are socially acceptable. We love to talk about saving the bees (so long as they aren’t stinging us or interrupting baseball games); an entire industry is banking on our cultural acceptance of crickets to sell the idea of entomophagy; and people usually love lady bugs both because they’re supposedly lucky and they’re adorable.

Insects that we find culturally significant or aesthetically appealing simply don’t spark such a visceral negative reaction as the “super gross” or “grotesque” infestation at Burning Man.

“If these were all butterflies, people would be remarking on what a magnificent sight it is,” Berenbaum says. “It wouldn’t be called a disaster or an infestation, it’d be called a beautiful miracle of nature. Nobody ever talks about a plague of butterflies.”