NASA: Sea Level Rise Is Going To Get Much Worse 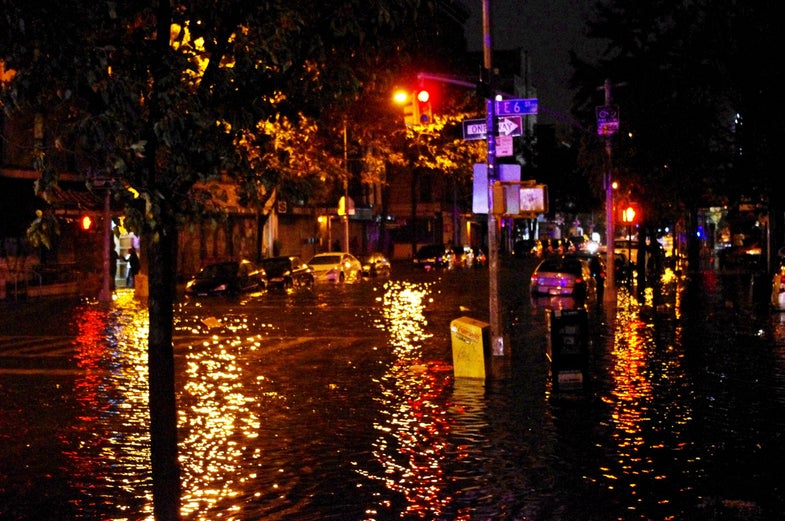 New York City streets after Hurricane Sandy hit the city in 2012. Flooding like this could become more common in the future as sea levels rise. David Shankbone/Flickr
SHARE

Eleven of the fifteen largest cities in the world are located on the coast. The tenuous barrier between land and sea was a boon for humanity in the past, providing access to ports around the globe, building lifelines of trade between countries, and raising triumphs of steel and concrete high into the air. Now, sea levels are also on the rise, putting millions of people who live in those cities in harm’s way.

“Given what we know now about how the ocean expands as it warms and how ice sheets and glaciers are adding water to the seas, it’s pretty certain we are locked into at least 3 feet of sea level rise, and probably more,” Steve Nerem, leader of the Sea Level Change Team said in a press release. “But we don’t know whether it will happen within a century or somewhat longer.”

To put that into perspective, NASA estimates that since 1992, sea levels have risen by about 3 inches.

Adding to the uncertainty over time, the Earth is not a perfect sphere, and variations around the globe mean that sea level change isn’t evenly distributed around the globe. In some places, sea level rise far exceeded the 3 inch average, going up by nearly 9 inches.

To help people really picture how sea level change could vary around the world, NASA put together this short video showing how, even though there are a few areas where sea level is actually dropping, over the vast majority of the world, sea level is going up.

Sea level rise will be felt most harshly along the coasts, where large population centers are already having to prepare for more flooding every time a storm rolls in. Already, flooding in coastal cities costs $6 billion every year. By 2050, that number is expected to reach $1 trillion.

In the meantime, low-lying areas from Florida to Boston are pondering infrastructure solutions, and New Orleans, recognizing the 10 year anniversary of Hurricane Katrina this week, just released a plan to make the city resilient in the face of future storms.