This Bacterium-Sized Bunny Could Be The Future Of Bionic Brains

Scientists in Japan have created a new material that can be shaped into complex, conductive 3-D structures. Get ready for your custom brain electrodes. 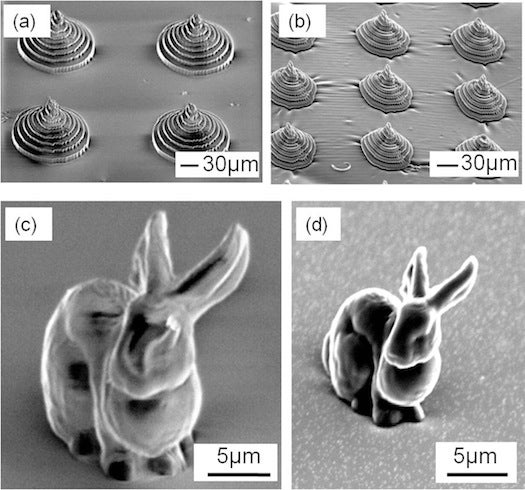 The rabbit sculpture above is the size of a typical bacterium and is made of a new type of resin that has exciting implications for bionic implants. Developed by researchers in Japan, the resin allows scientists to mold highly conductive, complex 3-D structures at the microscopic level.

The scientists began with a problem: In order to make a tiny resin sculpture into an electrode (which, for example, could be implanted into the brain to treat epilepsy), scientists bake it at high temperatures, which turns its surface into carbon. The “carbonizing” process makes the resin more conductive, but it also wrecks the sculpture’s shape, warping it into more of a blob (not so good if you’re trying to create a delicate, precise medical implant).

To solve this problem, the researchers created a new type of resin made with high concentrations of a material called resorcinol diglycidyl ether, which has been used in the past to dilute other resins. The new material, which starts as a light-sensitive liquid, undergoes only minor distortion after baking—which means scientists can now create conductive structures with all the details of the bunny above.

The Japanese team–including physicists and chemists from Yokohama National University, Tokyo Institute of Technology, and C-MET–tried various methods to harden their microscopic shapes, including ultraviolet light and laser beams. They found that the latter technique was the most versatile because they could use the laser to draw a shape onto the liquid resin, building it up layer by layer.

In the future, this new method and material could be used to create customized microelectrodes that sit in the brain and send and receive electrical signals to treat disorders like epilepsy, depression, and Parkinson’s disease. According to the authors, the discovery could also be used to make microscopic 3-D coils for heating applications.

The study appears today in the journal Optical Materials Express.

(Wondering why it’s a rabbit? The researchers were inspired by the classic Stanford Bunny commonly used in computer graphics. Read about it here.)