A Space Shotgun To Shoot At Asteroids 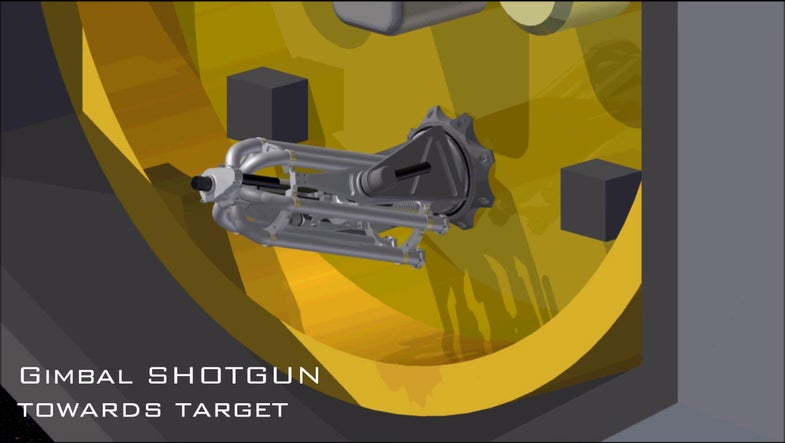 “Shoot first, ask questions later” is simultaneously a cool line for a gruff action hero and a terrible policy. A new concept for a space shotgun offers a twist on the old refrain: what if shooting was asking questions? NASA’s Asteroid Redirect Mission wants to send a robot to an asteroid. In a video released today, Honeybee shows how a freaking shotgun attached to that robot could learn about the asteroid by shooting at it.

First, the vehicle would survey the surface of the asteroid. Then it would target the shotgun at the asteroid. Once on target, the shotgun will fire a projectile, which could do one of three things. One is to fire a shell that cracks open when met with a certain strength, thereby revealing just how hard the asteroid is, like this:

All of this is designed so that the NASA mission can retrieve a boulder of appropriate strength from the asteroid, in order to study it and then bring it back to… the moon. The mission has drawn criticism within and outside NASA. Landing on an asteroid certainly isn’t going to Mars. But there is value to be gained from studying asteroids themselves: NASA says “The robotic mission also will demonstrate planetary defense techniques to deflect dangerous asteroids and protect Earth if needed in the future,” and while they’ve previously discussed nuking asteroids that get too close to earth, perhaps it’s better to start with a weapon not explicitly banned by international treaty.

Update: An earlier version of this post misidentified the company as Honeywell, instead of Honeybee Robotics. That has since been changed.