Here are some of our faves 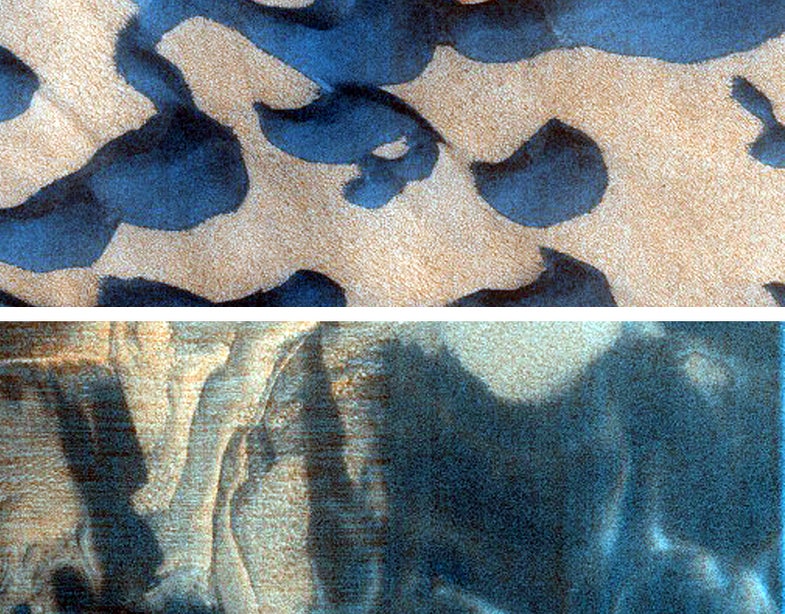 The person in charge of naming Martian features might be a big Frank Herbert fan, as evidenced by Kohlar (top) and Tleilax (bottom). NASA/JPL/University of Arizona
SHARE

Since its launch in 2005, the Mars Reconnaissance Orbiter (MRO) has been orbiting the red planet and snapping photos merrily as it goes.

The MRO sends back photos of Mars every month, but this month’s dispatch of 1,035 photos is unique. It’s especially hefty because every 26 months, the geometry of Earth and Mars offer a sweet spot for data return, director of the Planetary Image Research Laboratory, Alfred McEwen told Popular Science: During opposition — as Mars and the Sun are on opposite sides of Earth’s sky, this year on May 22 — we get unobstructed communications between Mars and Earth for a few weeks.

This time, that direct line of sight between Mars and Earth coincides with Mars’ equinox, when the sun shines directly on the planet’s equator, splashing light from north pole to south and giving the MRO its most complete views of the red planet. For the rest of the year, either the north or south pole is in constant darkness.

The MRO’s images could help map potential landing sites for future landers, notes McEwen, such as the ExoMars demonstration module in a few months, the InSight lander in two years, and the ExoMars and NASA rovers set to launch in 2020. The MRO is also keeping an eye on the active processes on the surface, including steep slope flows, migrating sand dunes, dry ice jets in the polar regions and new impact events, he says.

Here are some of the most striking and significant photos to come out of this new release. Click through each name to find more information and a higher resolution version, and see the entire collection here.