The first recorded "reptile fall" is a real feast. 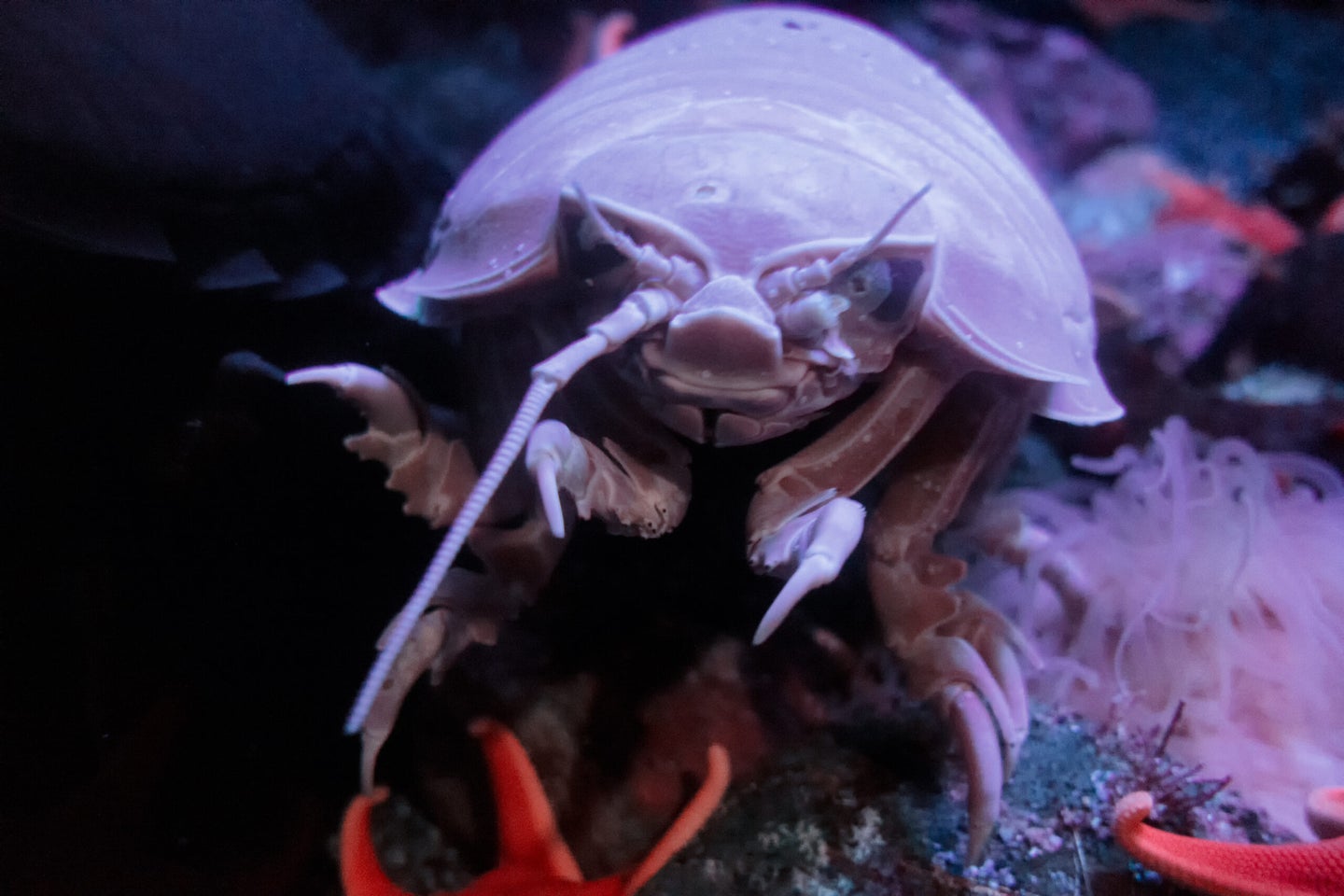 The bottom of the ocean seems incredibly desolate. Apart from sand and darkness, few things are in abundance. And that elevates ordinary animal carcasses to the level of the most sumptuous buffet you can imagine. But food falls, the alliterative name for when a dead animal’s body drifts down to the sea floor, are some of the wildest feasts in all of nature, bringing together all kinds of deep sea critters.

For scientists, though, these falls pose something of a problem. You can’t exactly predict when and where a whale or a sea lion will die, and you can’t spend all your time searching the world’s oceans for a freshly dead critter. So if you want to study the various worms, arthropods, and bacteria that opportunistically chow on a food fall, you have to drop the carcass yourself. Biologists have done this with whales to monitor which deep sea creatures show up as the body turns from fully-blubbered behemoth to skeletal monster. And this week, for the first time ever, the Louisiana Universities Marine Consortium (LUMCON) did the same for an alligator—and they recorded the whole process.

The gator in the video is currently about a mile deep at the bottom of the Gulf of Mexico, and was euthanized as part of a conservation effort. Those giant pill bugs crawling on top of and inside that alligator are actually related to the terrestrial, tiny pill bugs you may have played with as a child, though they’re more accurately called giant isopods. In the video, the biologists conducting the study explain that part of the reason these crustaceans may have been able to grow so large in comparison to their land-lubbing cousins is food falls like this. Having unpredictable, infrequent food sources makes possessing a large body beneficial. It means you can literally eat yourself into a stupor, then survive on the stored lipids for months or even years.

These isopods showed up within 24 hours, but as the carcass gets ripped apart, the host of creatures will continue to shift. Larger animals can rip apart the flesh. But as with whale falls, biologists suspect that smaller critters will show up as meat gets more scarce and bone becomes the course du jour. Osedax worms can embed themselves in whale skeletons, sucking out the lipids within, but they don’t show up for months or even years after most of the flesh has been stripped from the body.

The LUMCON biologists aren’t yet sure what they’ll find as the alligator decays, but whatever it is will help give them insight into how ancient food falls may have operated. Alligators have remained relatively unchanged for the last 80 million years. The ways in which their bodies nourish today’s deep sea communities could show researchers what sorts of animals could have dined on prehistoric alligator flesh, too. Plus, other ancient reptilian creatures likely also would’ve sunk to ocean floors periodically. Large storms can sweep even large animals like alligators out to sea, some alive but many dead, and their bodies likely would have been a food source of plenty of creatures over the millennia.

Over the coming weeks, these biologists will learn how the animals that feast on reptiles differ (or don’t!) from those that chow on fallen mammals. In the meantime, we’ll just have to enjoy those pillbugs on repeat.