These snakes slurp snails, and that’s great for farmers

Not all snakes are scary. 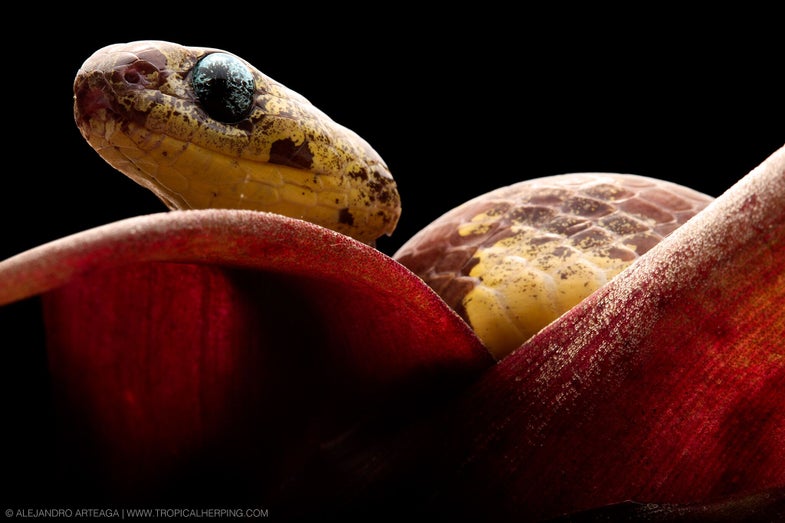 Snakes slurping slimy snails—try saying that five times fast. Scientists are celebrating the discovery of five new species of snakes in Ecuador with rather strange eating habits: a modified jaw allows these serpents to scoop snails right out of the shell.

“They looked different from any snakes we’d ever seen before,” says biologist Alejandro Arteaga, whose findings on the snakes were published in the journal ZooKeys.

Not only do these snakes look different—one species has blue eyes, which Arteaga says is quite unusual—but their methods of consuming food seem more like something you’d see in a French restaurant than the rainforest. Most snakes are indulgent, skipping the tiresome process of chewing and simply swallowing prey whole. The next few weeks are spent relaxing and digesting, not hunting for food.

But these snakes suck fat, slimy snails out of their shells—an arduous task for an armless creature. And there’s none of the typical lazing about afterward; they have to eat almost daily to sustain themselves.

“I was so surprised, at first I thought the snail was attached to the snake’s head for some reason,” Arteaga said of the first time he witnessed it. “Half of its body was suspended in midair with the shell in its mouth, and its jaw moved slowly from side to side inside the shell. A couple minutes later, it spit the shell out and had eaten the fleshy part of the snail.”

While snails are plentiful, these snakes are not. Of the five new species, Arteaga said four face the threat of extinction. Before 2010, Ecuador had the highest deforestation rates in South America, and still loses 1,100 miles of natural habitat every year. Luckily, there seems to be support for these snail-sucking snakes. A plot of previously unprotected land—where some of the snakes Arteaga has grown so fond of live—has been allocated for conservation.

“They’re so docile, they never attempt to bite even when you handle them,” he says. “They even look a bit hopelessly harmless.”

The snakes don’t bite, but they will make you cover your nose. When threatened, Arteaga says they’ll roll into a tight ball and discharge a musty odor.

While snakes are often portrayed (unfairly, Arteaga adds) as scary or dangerous, these snakes are actually helpful to humans—especially farmers. In 2012, Ecuador was invaded by an army of African land snails. One of the world’s top 100 most invasive species, these snails reproduce at a rapid rate, laying up to 300 eggs a month. They’re still a huge problem in Ecuador, wreaking havoc on fields and crops; they also carry a deadly parasite that can kill humans if ingested. But they don’t kill snakes—so snail-slurpers to the rescue!

See? Not all snakes are scary. New Yorkers don’t seem to think so either; the names of the snakes were auctioned off at a gala in NYC last year, raising enough money to purchase the plot of land where conservation work is already underway.

“We’re lucky we found them,” Arteaga says. “If we hadn’t identified them in time, they may have already been lost.”