The secret is in their flight. 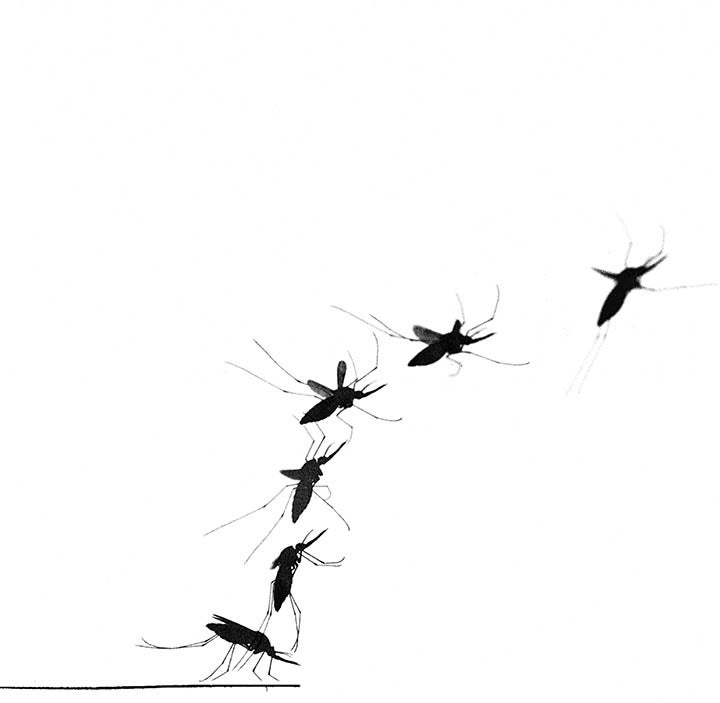 A mosquito, fatted with blood, takes off. DepositPhotos
SHARE

Your typical aeronaut—a sparrow or a fruit fly, for instance—takes flight by jumping into the air. Only once aloft do they begin to flap their wings.

Mosquitoes have the perplexing distinction of doing basically do the opposite. They begin their flight pattern by flapping their wings for 30 milliseconds before jumping into the air. And they beat their wings fast, as much as 800 times per second, when most other insects their size would ordinarily only flap their wings around 200 times.

“One of the key questions of aerodynamics and biomechanics is, why do they fly in a way that doesn’t look efficient?” says Florian Muijres a biomechanics researcher at Wageningen University in the Netherlands. Muijres is an author on a recently released study in the Journal of Experimental Biology that looks at why the mosquito might have developed such an unusual manner of flight. It may be a sophisticated way of evading detection.

Specifically, Muijres and his colleagues looked at how Culex mosquitoes (which along with Aedes aegypti carry malaria and Zika) manage to take off when weighted down with a blood meal. Only female mosquitoes suck blood—they need it in order to lay eggs. But after chowing down on our precious bodily fluids, they often find themselves carrying double or triple their own weight, and they still need to fly away.

“Imagine if you had a backpack of 100 or 200 pounds on your back,” says Muijres, “and then you have to take flight.That is, energetically, a very costly endeavor.”

If mosquitoes took off the way other insects do, pushing down on their legs to jump up, they’d apply a lot of pressure to their host’s skin; enough that they could get noticed (and swatted). But the premature wing beating isn’t the mosquitoes only trick.

“The other thing is they have these very long legs they can extend,” says Mujires. “They can distribute the forces that they need to distribute to the leg over a longer period of time.”

The end result is that the amount of force that they exert on our skin is much less than other insects, allowing them to go undetected even when bloated with our blood.

Mujires and his colleagues came to this conclusion through a mix of high-speed videography and modeling.

They set up high-speed cameras capable of recording at 30,000 frames per second, then filmed mosquitoes taking off both with and without the internal burden of a blood meal. If you’re wondering who provided the blood for the mosquitoes, that would be study author Sophia Chang of the University of California, Berkeley. She took one for the team, because mosquitoes feed more readily from a human than an artificial feeder.

The researchers needed a speedy camera because to get the necessary data, they needed to capture at least 20 images per wing beat (remember, a mosquito can flap its wings up to 800 times a second). From the high-speed photography, they were able to capture the mosquito’s whole movement. And using Newton’s second law (Force = mass x acceleration, if your physics is rusty), they were able to figure out how much force the mosquito was generating overall.

An aerodynamic model let them convert the wing movements into aerodynamic forces. By flapping its wings before take off, a Culex mosquito is able to generate 60 percent of the power it needs to take flight.

“It looks like the mosquitoes have specialized a take-off maneuver that allows them to really generate forces that aren’t detectable by us,” says Muijres. “It enables them to be more successful when escaping from a host.”

Muijres suspects that the study will hold up across mosquito species, and if does, well, it’s kind of depressing. While we work hard to detect and kill mosquitoes, it seems mosquitoes have worked equally hard to bite us undetected. It’s hard not to let the blood suckers get you down.