How many mosquitoes can you squish into a syringe? Scientists may finally have an answer. 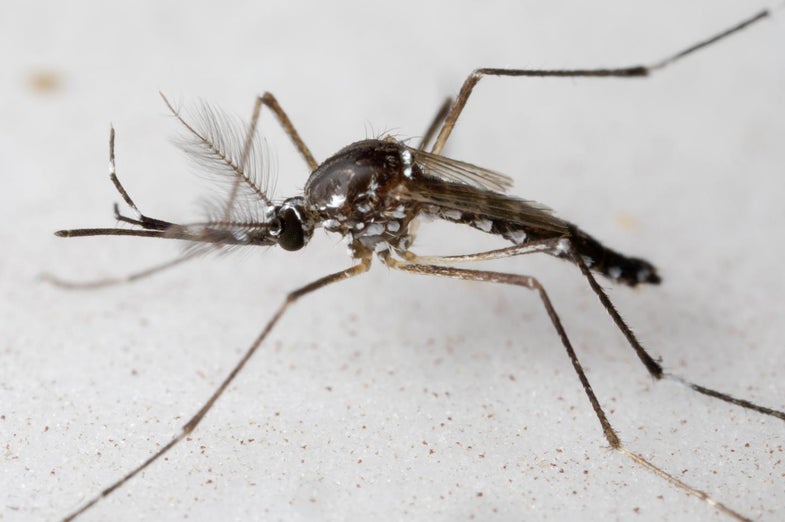 This male Ae. aegypti, like many of the mosquitoes in the test, emerged with some missing scales and slight damage to its wings but was still able to fly. Geoffrey M. Attardo, Ph.D., University of California, Davis/Journal of Insect Science
SHARE

If you’ve ever tried to fall asleep with one in your room, you know they’re irritating. But in many places, mosquitoes do far more than induce itchy bumps. Thanks to their blood-sucking ways, some species of mosquito transmit diseases from one host to another—contagions like Zika virus, dengue fever, yellow fever, and chikungunya. While many of these are traditionally considered tropical diseases, they’re showing up farther and farther away from the Equator thanks to climate change. The culprit behind the ailments listed above is the yellow fever mosquito, Aedes aegypti, an invasive mosquito brought over from Africa on slave ships more than 400 years ago.

A new study published today in the Journal of Insect Science asks a question about the yellow fever mosquito that’s never been asked before: just how many can you fit in a syringe? The answer: more than you probably think. Researchers from New Mexico State University and other institutions found that male yellow fever mosquitoes tightly packed in a syringe (240 mosquitoes per cubic centimeter, or about 1,200 to a teaspoon) can survive for 24 hours, and go on to fly again. It’s the first exploration into a new avenue of research that might eventually contribute to mosquito reductions in areas of the country colonized by Aedes aegypti. The research also produced this amazing gif:

“They can survive this sort of stress much better than a vertebrate animal,” says study author Immo Hansen of New Mexico State University. Insects have exoskeletons and can persist longer in low air environments, he says.

Why would scientists wish to pack mosquitoes into a syringe? To ship them in the mail, of course. One method of population reduction is the sterile insect technique, wherein infertile male yellow fever mosquitoes are introduced into a wild population. In theory, they still do everything fertile males do, like mate, with the key difference that no offspring come from their unions. Only females suck blood and spread disease, so the infiltration of these impotent males does nothing but create more competition for members of the species that would otherwise proliferate. But the mosquitoes need to be specially bred in a lab. Scientists need to know how to ship the insects from the lab where they’re created to the wild populations they’re meant to breed with.

This technique was developed in the 1950s to combat screwworm flies in the Americas—there, at least, it’s been successful. The screwworms are all bred in a central facility and shipped as pupae in crates. Mosquitoes have to be shipped as adults, and they don’t fly very far in their lifetimes (just over 650 feet). That means they need to be released very close to wild populations.

Although companies like Alphabet (Google) are betting that using drones to introduce sterile mosquitoes into wild populations will help fight the disease-spreading bugs, there isn’t robust and publically-available scientific evidence showing that this is the case. Verily, Alphabet’s life sciences arm, runs a program called Debug that has a project for rearing and releasing male mosquitoes infected with a common bacteria that makes them unable to have viable offspring. It has conducted two trials, one in California and one in Australia.

“I’m concerned that modified males or even sterile males are not going to be as reproductively successful as the wild-type mosquitoes,” says Cornell University entomologist Laura Harrington. Harrington, who studies mosquitoes, says she wouldn’t want to see governments putting money into this solution in the absence of publically available evidence.

As for the study at hand, Harrington says the researchers could have designed their experiment more carefully. “I think whenever possible it’s good to think about what’s actually happening to the mosquitoes in the field,” she says. In that environment, they won’t be kept at a comfortable temperature of 57.2 degrees Fahrenheit, and they’ll be subject to other factors like wind and rain. Without further testing, it’s impossible to know how they’ll do under real-world conditions—and beyond that, she notes that the strain of mosquito used in the experiment is lab-raised, not a wild strain or a crossbreed, which have been shown to be more reproductively successful.

“The fact they can fly in a bug cage on a tabletop is a pretty low bar,” Texas A&M University entomologist Zach Adelman says. “But it is a bar.” With more study, perhaps this shipping method will work. But there are bigger questions to answer about the efficacy of any method of mosquito prevention, he says. There isn’t robust scientific data on whether pesticides, sterile insect technique, or other strategies actually produce the desired results.

Still, he says, “I’m surprised at how many they were able to stuff in a tube.”