We suck at recycling straws—so maybe we should ban them 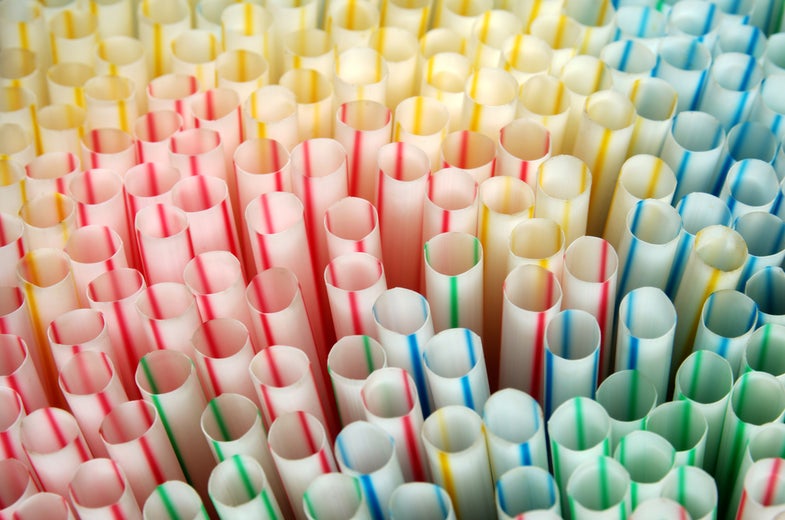 Walk into any casual restaurant and before you’ve finished looking at the menu, your waiter will probably give you a glass of cold water. There might be a lemon in it. There might be ice. There’s probably a plastic straw sticking out of the cup. Perhaps this morning you slurped up your daily dose of caffeine through an iconic green straw, and then tossed it into a trash can along with your plastic coffee cup without a second thought. The point is, Americans use a lot of straws, and we rarely stop to think about the environmental impact of the hollow, single-use tubes that we discard daily.

A state representative in California is hoping to change that. Assemblyman Ian Calderon introduced a bill in January that would ban single-use plastic straws in sit-down restaurants. (The bill’s first draft didn’t apply to most take-out or fast-food establishments.) The bill stirred up a lot of controversy around the harsh fines and possible jail time it proposed for violators, but Calderon’s office has since offered amendments that wouldn’t actually make criminals out of waiters who give customers straws.

But why go through the lengthy process of banning straws in the first place, instead of encouraging recycling?

It turns out that in the United States, we don’t actually have systems in place to effectively recycle most straws. They quite literally fall through the cracks.

“You can have straws made out of polypropylene, which is entirely recyclable,” says Kartik Chandran, a professor at Columbia University’s Department of Earth and Environmental Engineering. “But the machines we have aren’t really capable of capturing something in the size range of straws.”

That’s how they end up in the ocean, and most viscerally, lodged into the noses of sea turtles.

While of course animals deserve not to be impaled by our plastic debris, resource specialist Darby Hoover at the Natural Resources Defense Council points out that plastics are made from fossil fuels to begin with—which threatens the planet, sea turtles included. “This is part of a bigger issue,” says Hoover. “There are all kinds of plastic products we use everyday made from fossil fuel derived materials, and we should be prioritizing [using] stuff that’s designed not to be used once and thrown away.”

So why don’t we just make our recycling machines better at grabbing straws? Americans have a pretty dismal track record for recycling in the first place, and most of the plastic recycling that’s collected is shipped overseas to be sorted and manufactured into other products, so there’s little incentive to do the dirty work at home. But even with better sorting techniques or higher recycling rates, Hoover says that most recycled plastics end up in products like lumber that we don’t use every day. “That means you have to keep going back and getting more virgin fossil fuel material for new cups, new straws, and new bottles,” she explains. Reducing and reusing, it turns out, are actually the most important of the three R’s you learned in elementary school.

That’s why, in theory, the plastic straw ban could be effective. It could reduce the overall plastic straw waste produced in California. The ban also reminds customers that they have a choice in consuming things so mundane we don’t even think about them. And it puts pressure on manufacturers to design more environmentally-friendly options.

The straw ban is more than just a theoretical proposal. California banned single-use plastic grocery bags in 2016, and Ocean Conservancy estimates that bags now make up around three percent of the trash in California’s beaches, down from 7.4 percent in 2010.

While the image of littered beaches and injured animals can spur action on environmental problems, there’s another huge problem that we can’t see as clearly: microplastics. These sesame-seed sized particles shed from all the myriad plastic products we use every day, from our clothes to our cosmetics and, yes, our straws. “They’re everywhere—not just in the water, not just in the soil, but in the gas phase as well, in the air,” Chandran says. And not much is known about the potential health and environmental impacts of miniscule plastic debris floating around everywhere.

In terms of reducing plastic waste, Chandran says it’s pretty clear that reducing use is a more effective solution than recycling. “There’s no reason for us to be adding plastics products into the environment, from a very black and white perspective,” he says.

So if you have to use a straw and you want to reduce your environmental impact, consider carrying a reusable, stainless steel one next time you pack a lunch or eat out. It works just as well as a the plastic version, and you’ll know for certain that no sea turtles are getting stabbed in the face because of your soda.