Apollo 11 Mission Gear Up For Auction 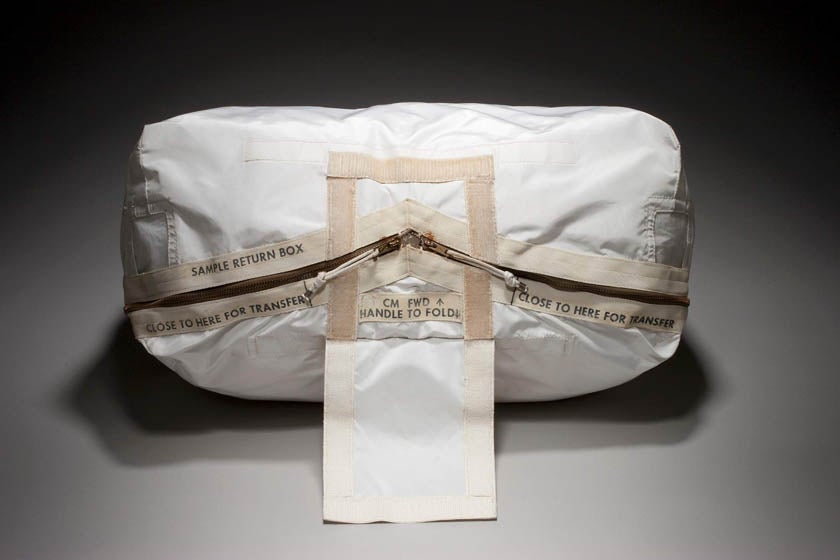 Lunar rocks were placed in an aluminum box for return to Earth; this Beta cloth cover went over the box, to contain the dust and any stowaways. courtesy Bonhams
SHARE

To commemorate the 40th anniversary of man’s landing on the moon, you can buy yourself a little piece of space history. On July 16, the auction house Bonhams is conducting an auction of lunar memorabilia. The sale includes a number of items that the Apollo 11 mission crew carried onto the moon’s surface on the history-making trip. Lunar dust still covers some of the lots.

Included are the checklists that the astronauts used as they proceeded through the landing (estimated price: $125,000-$175,000), flight plans, star charts, models, specimen collection cases, and more. It includes items from the collection of spacecraft engineer Dr. Maxime Faget, and many pieces used and autographed by Buzz Aldrin, the second man on the moon.

Since the Apollo astronauts were unable to get life insurance, they prepared for their loved ones’ welfare by autographing and postmarking postal covers, which could be sold by the families in case of disaster, to provide some financial support. These covers are also up for auction. 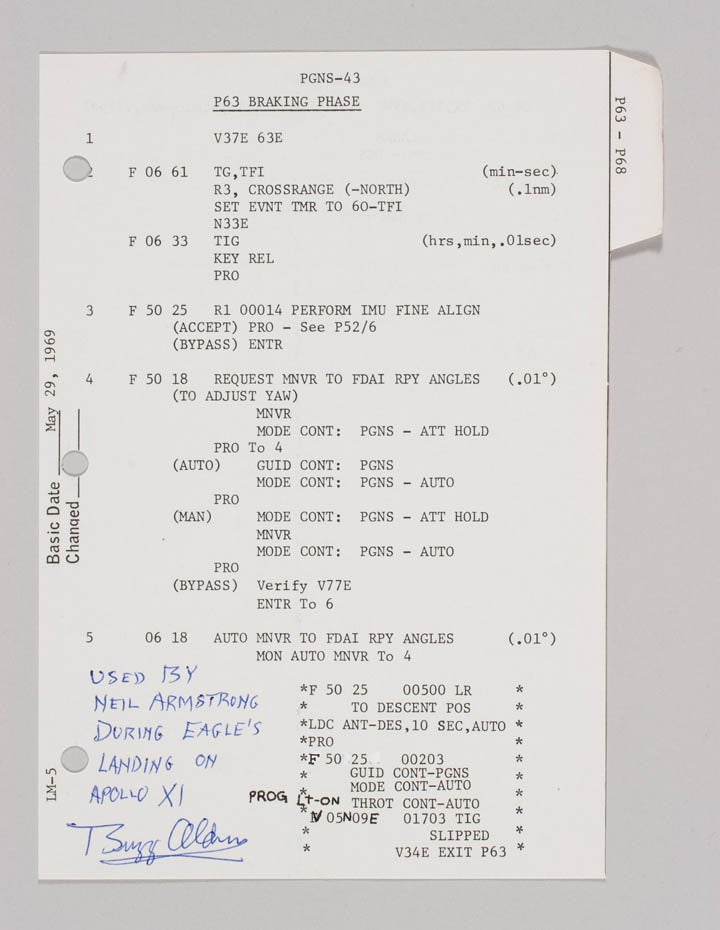 This sheet, which was carried on the mission by Buzz Aldrin and Neil Armstrong, documents step-by-step how to land a lander module on the moon. 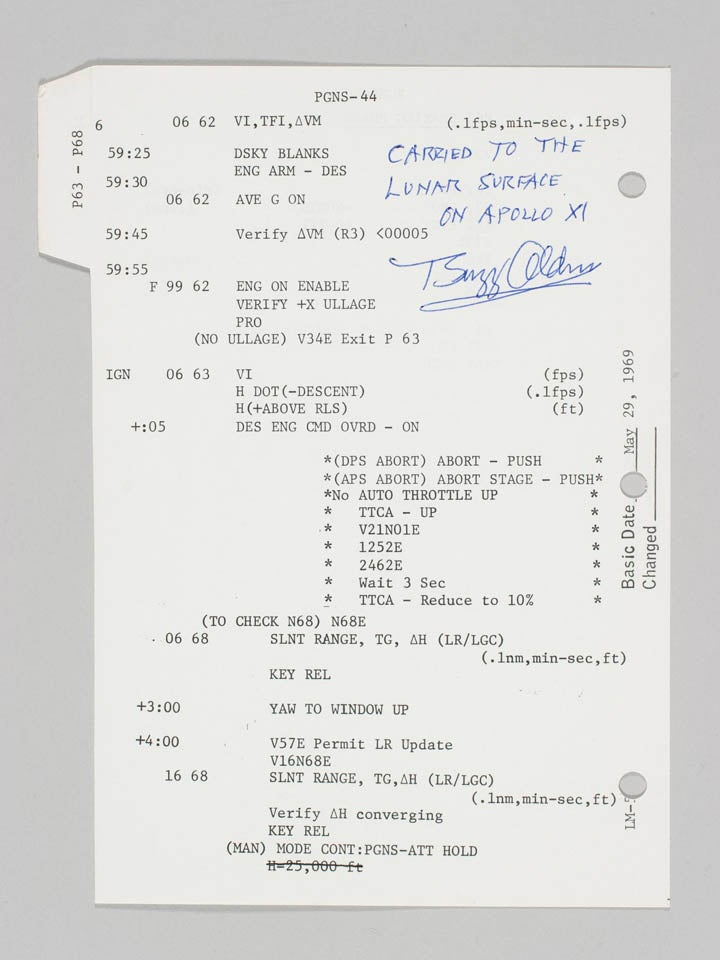 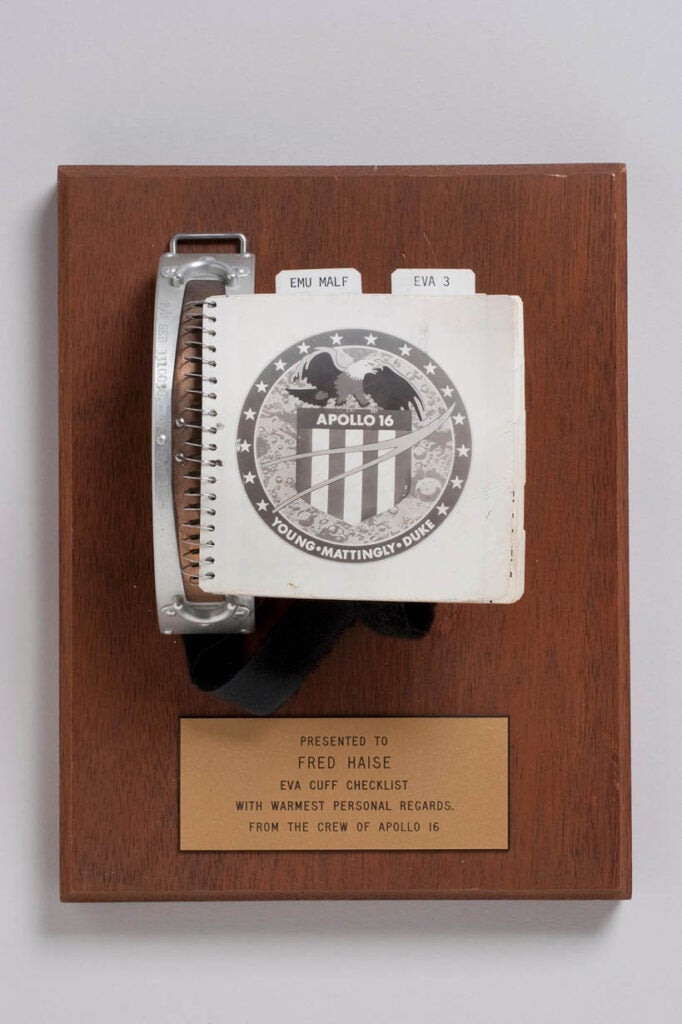 This 29-page checklist, mounted on a metal wristband, was worn by astronaut Charles Duff during the Apollo 16 lunar surface exploration. 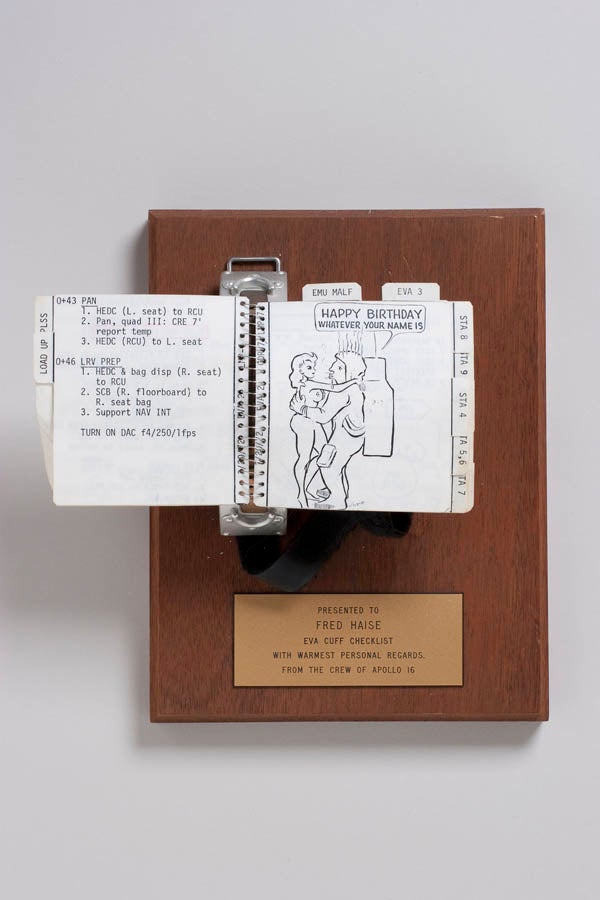 Inside the Cuff Checklist 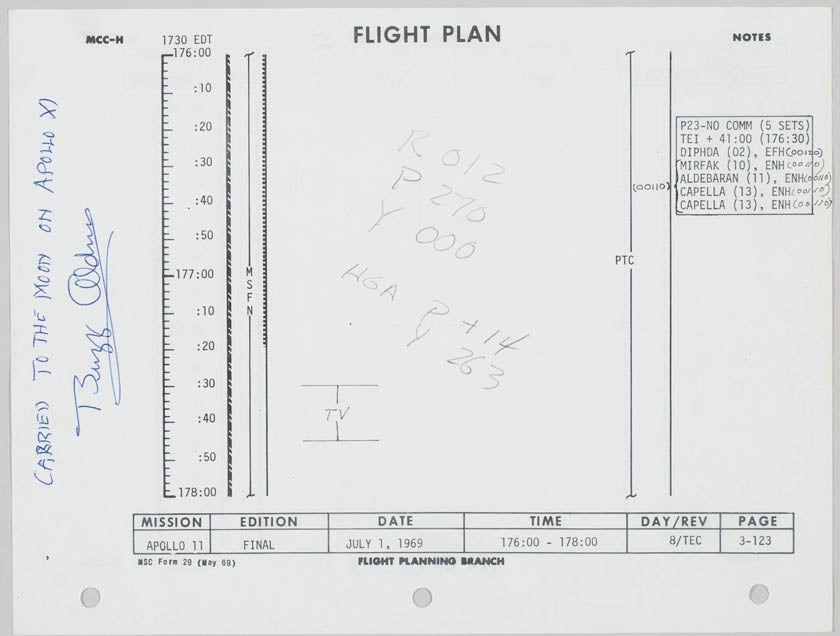 This is the flight plan covering the period of the television broadcast during the Apollo 11 mission. It indicates the roll, pitch, and yaw orientation to place the command module Columbia’s antennas in the correct angle for the broadcast. 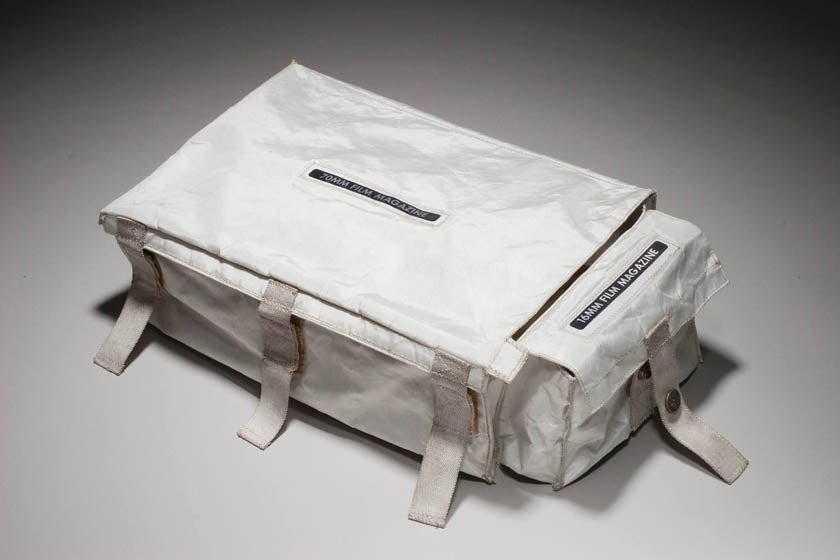 This bag, made of fireproof silica Beta cloth, was carried to the lunar surface by the Apollo 15 crew. The straps are grimy with moon dust.

Used on the lunar surface by the Apollo 14 mission crew, to brush moon dust, kicked up by the wheels of the Modularized Equipment Transporter, off camera lenses. 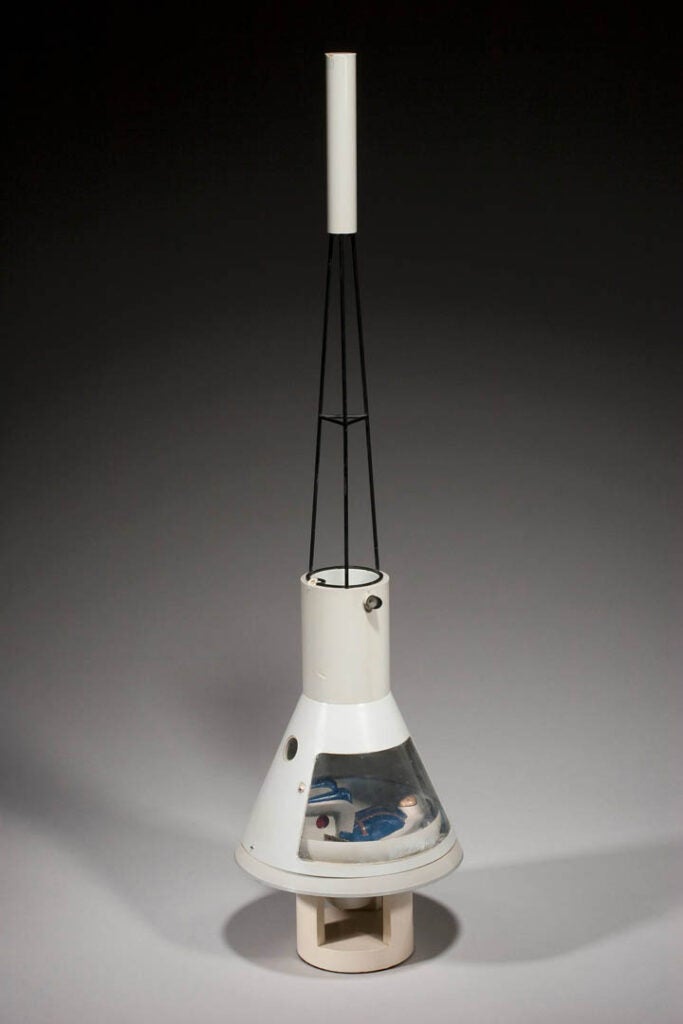 This steel and plastic model of the Mercury spacecraft is identical to the one shown at the first public announcement, in 1959, of the pilots selected for Project Mercury.

Lunar rocks were placed in an aluminum box for return to Earth; this Beta cloth cover went over the box, to contain the dust and any stowaways. 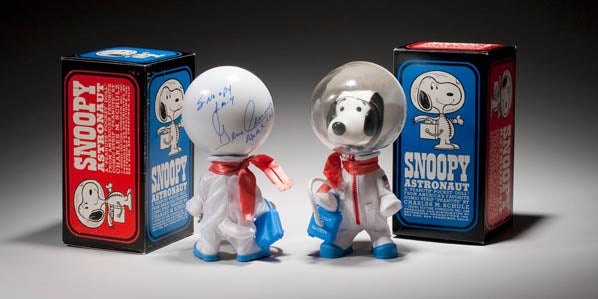 This toy was produced in China in 1969 to celebrate the Apollo X manned flight mission. 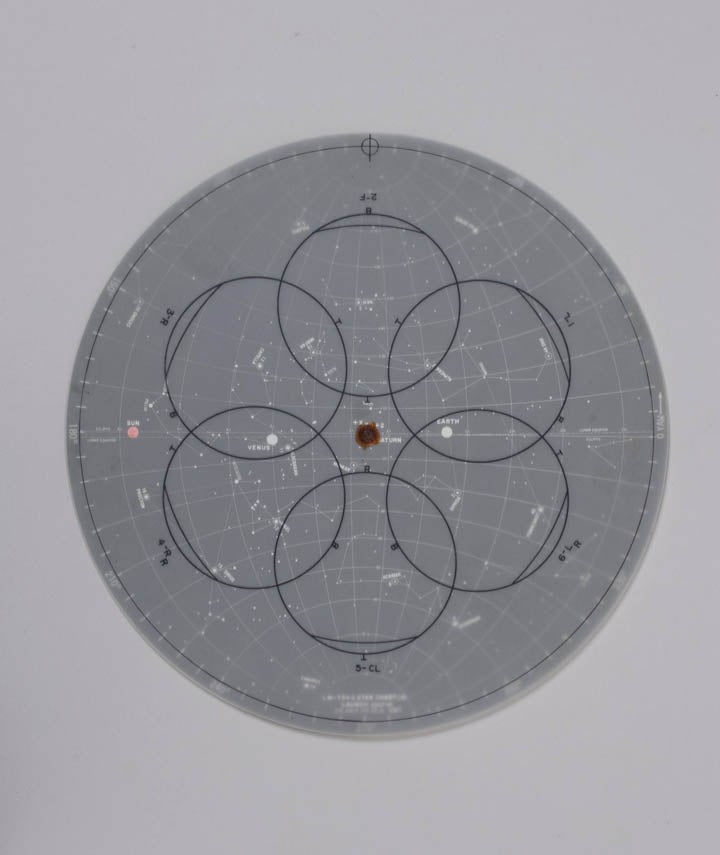 This is the chart that Buzz Aldrin and Neil Armstrong used to determine their location on July 20, 1969, just after they made the first lunar landing.
Moons
Solar System
Space