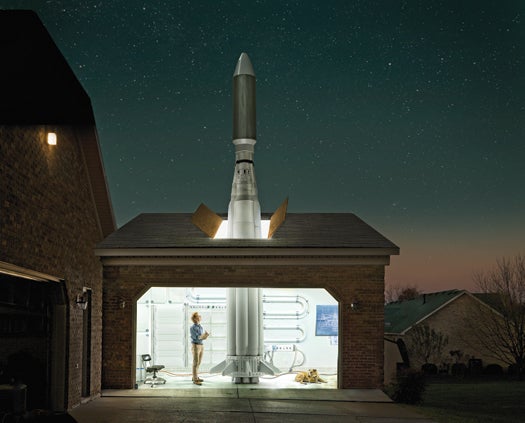 in 2012, two large, well-funded companies, Virgin Galactic and SpaceX, will begin making regular journeys to suborbital and orbital space, commencing the post-NASA era of commercial space travel. But those companies will not be alone in their efforts. In 2009, the Federal Aviation Administration changed its regulations to allow amateur rocketeers to launch their craft as high as 93 miles, and now, as composite materials and electronic tracking systems become increasingly affordable, small companies and even garage inventors are taking flight.

Last June, Danish engineers at a micro aerospace nonprofit called Copenhagen Suborbitals launched a 1,440-pound rocket from a platform in the Baltic Sea to a height of more than two miles, all on a budget of just $100,000. By design, the rocket fell far short of the Earth-space boundary, but the engineers will attempt a more ambitious launch this summer. If all goes well, their rockets will reach an altitude of 35 miles. Eventually, the capsule could carry a human passenger to space.

Also in 2012, several teams will compete for the Carmack 100kft Micro Prize, established last year by John Carmack, one of the creators of the computer game Doom. The first to launch a rocket to an altitude above 100,000 feet (19 miles, or just into the stratosphere) will win $10,000. In September, Derek Deville, a Florida engineer, sent a 320-pound rocket to a height of 121,000 feet in just 92 seconds, but the rocket failed to record required GPS data, so Deville didn’t take the prize. Another team, in New Zealand, launched its own garage rocket in December, and two more groups claim to have rockets ready for flight. By January, the prize may already be claimed, and the do-it-yourself space program will have liftoff.