One of the richest men in history is spreading his wealth around again. The Bill & Melinda Gates Foundation announced... 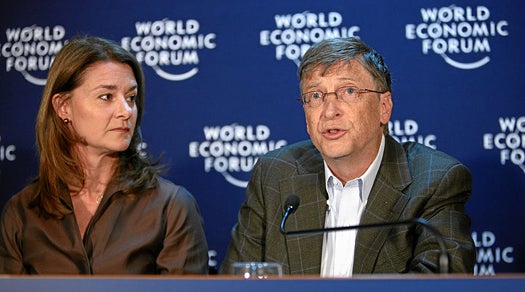 One of the richest men in history is spreading his wealth around again. The Bill & Melinda Gates Foundation announced its fourth round of Grand Challenges Explorations grants this week, funding 78 research projects in 18 countries on six continents with $100,000 each to pursue everything from better cell phone microscopes to stronger malaria deterrents to male contraceptive techniques.

Our favorite project to come under the Gates umbrella: sweat-triggered vaccine delivery. Developed at the Helmholtz Center for Infection Research in Germany, this novel vaccine delivery system employs nanoparticles that mimic pollen, which has shown the ability to penetrate human skin through hair follicles. Upon contact with human sweat, the nanoparticles burst, delivering antigens and adjuvants that deliver the vaccine through dendritic cells that cluster around hair follicles.

But there are plenty others that give sweat-activated vaccine bombs a run for their money. For instance, two researchers at the University of Strathclyde in the United Kingdom received a grant to develop a laser-guided seek-and-destroy system for destroying potentially fatal leishmania parasites in the body. One laser images the parasites, while a second one fires to finish them off, creating a minimally invasive way to track down and neutralize this parasite that, if left unchecked, can hijack the immune system and wreak all kinds of havoc.

Of course, there are several more grounded ideas that could make an equally large impact on infectious disease treatment and prevention. Researchers at the University of Uganda are looking into ways to deploy carnivorous plants to combat malaria-carrying mosquitoes, while Thai researchers are receiving money to develop a system to treat traditional scarves worn by migrant workers living along the Thai-Cambodian border with insecticides that target malaria spreading bugs.

The only losers here seem to be mosquitoes. A Columbia University researcher will spend his grant money trying to figure out how to block the olfactory receptors in mosquitoes that help them sniff out humans, while a Johns Hopkins researchers is looking to wage biowarfare on the pathogen-passing pests with a virus that expresses a scorpion toxin that attacks mosquitoes where they live. The proposed pesticide will infect larvae, living within the mosquito genome long enough to be passed along to other bugs. It then expresses its toxic payload before the bugs are mature enough to spread malaria.

For a list of all 78 grant projects — and there are some cool ones — check the Grand Challenges and Global Health site.