Humanity has taken the fight against malaria into the guts of its host. 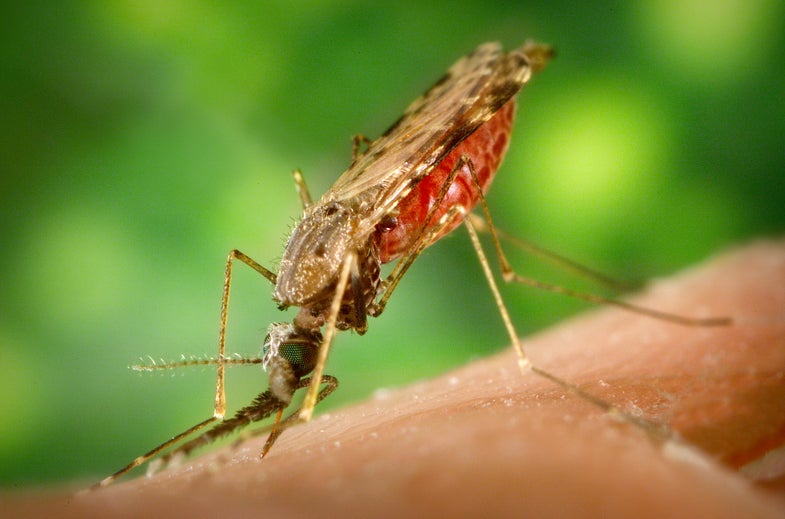 The deadly malaria parasite, a protozoan named Plasmodium, rides inside the bellies of mosquitoes to get from human to human. While some scientists have proposed using genetically engineered or sperm-free mosquitoes to fight malaria, a new method aims straight for the stomach: Researchers have found that feeding mosquitoes bacteria inoculates the insects against Plasmodium. And if the mosquitoes can’t carry the malaria parasite, they can’t accidentally pass it on to the humans they bite.

In a study published last week in PLOS Pathogens, scientists introduced a bacteria called Chromobacterium CspP to a population of malaria- and dengue-infected mosquitoes. They found that in addition to wiping out a substantial chunk of the mosquitoes, it killed the Plasmodium pathogens in the stomachs of the survivors. They believe Chromobacterium-spiked traps could infect wild mosquitoes, effectively vaccinating them against malaria. Ideally, short-lived mosquitoes will contract Chromobacterium before they reach humans.

The Johns Hopkins team thinks the Chromobacterium fights Plasmodium in two ways. First, it activates mosquitoes’ immune systems, which then destroy the malaria parasites as collateral damage. But Chromobacterium also kills Plasmodium and the dengue virus in laboratory cultures. This means it probably pumps out a slurry of chemicals that attack Plasmodium directly. The scientists speculate that these toxins might one day be used to fight malaria in people.

Researchers isolated the Chromobacterium from the mosquito species Aedes aegypti. There is no evidence that the bacteria can infect humans, but, Science reports, more research must still be done before scientists are sure its toxins are safe to use in the human body.

The fight against malaria in the developing world has ramped up in recent years. The WHO reports that efforts to combat the disease saved 3.3 million lives between 2000 and the end of 2013, but billions remain at risk–primarily in Africa. With treatment-resistant strains appearing, there is a demand for creative assaults on the parasite.

Chromobacterium is not the first bioagent deployed against malaria. Mosquito-killing diseases have joined chemical sprays and breeding disruption in the fight against the epidemic-carrying bugs for decades. But, if Chromobacterium works as planned, it would be the first dual-action bioagent, killing the disease and its biting vector.