Llamas could save us all from the flu

Their blood might hold the key to stopping every flu, every year. 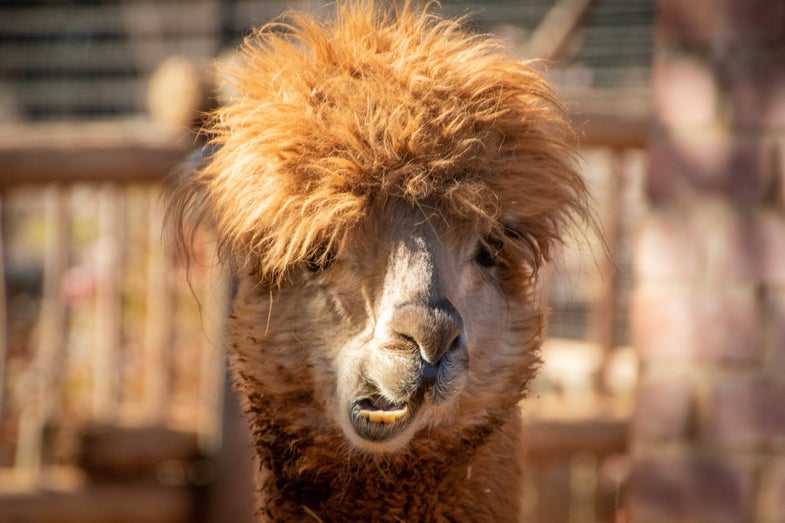 Llamas may be large and fluffy, but their antibodies sure aren’t. And that could be a huge advantage when it comes to fighting human influenza virus.

That’s all according to a new paper in the journal Science, which showed that a therapy based on llama antibodies could protect mice from otherwise lethal doses of the flu. In theory, the technique could eventually be used to manufacture a nasal spray that would act as a so-called universal vaccine, providing long-term protection against all types of the flu.

A shot-free solution to the flu—especially one that we don’t need to redesign every year—is obviously great news, but to really appreciate how ingenious this solution could be (assuming that it translates into humans from mouse trials) we have to back up a second to talk about how our bodies normally fight off the flu.

Our immune systems are equipped with a set of B cells capable of making antibodies. These Y-shaped proteins can identify certain regions of an invading virus, thus also enabling the B cells to sound the alarm that there’s a dangerous substance inside your body. Vaccines expose B cells to potential influenza viruses and allow them time to produce lots of antibodies in advance. That way if a flu virus gets in, the antibodies quickly identify the invader and mount an attack.

Human antibodies identify a part of the influenza virus called hemagglutinin or HA, which is a protein on the surface that normally allows the virus to attach to a human cell membrane. The problem is that influenza can mutate the HA region such that it still functions properly, but becomes less identifiable to your antibodies. This is why our flu vaccines generally don’t have high efficacy rates—influenza keeps mutating the HA region in order to thwart our defenses.

But while human antibodies attach to a mushroom-like head, there are other, less accessible parts of the HA molecule that don’t mutate much at all. The trouble is that human antibodies are too big to physically reach those bits.

And that’s where the llamas come in.

Like many camelids, including camels and alpacas, llamas produce tiny antibodies. Whereas human varieties have two large proteins forming the base of the Y, plus two smaller arms for the top bit, llamas have just one stick-like protein more like a sans-serif uppercase I. Because they’re smaller, they can latch onto parts of the HA protein that are less prone to mutation and thus kill influenza more efficiently.

These researchers created a synthetic antibody that’s sort of a Frankenstein mash-up of four different llama antibodies, but they didn’t inject it into the mice like a traditional vaccine. Because really, this isn’t a vaccine. Vaccines work by exposing and training your immune system—this is more like gene therapy. Researchers packaged genetic instructions to make the antibody into a harmless virus, then sprayed that virus into mice noses. The virus then entered the mouse cells and “infected” them with the antibody instructions, prompting their nasal cells to start producing the antibody on their own.

To test if the antibodies would work, the researchers exposed different groups of mice to different strains of the flu at lethal doses. Mice given a placebo nasal spray pretty much all died in a week or two, but mice who got the highest doses of the real spray were all spared (mice who got a middling dose mostly survived, but a few died).

Most importantly, the spray did all of this without having to train the rodents’ immune systems. Young, healthy people who get the flu shot tend to build a robust defense against the influenza virus. But older people or those with compromised immune systems often aren’t able to train their B cells to the same extent, meaning they get less protection from the flu vaccine. That fact, coupled with a weakened ability to fight off invaders generally, means that these groups tend to have much higher hospitalization and mortality rates during flu season.

If it is indeed possible to translate this finding in mice to create a human nasal spray, it might turn out to work just as well in the elderly as it does in young people. Their immune systems might not be as robust, but they could be much better prepared for an infection.

It’s also possible that this mechanism could produce a spray that would provide protection over many seasons and across many flu strains. Right now, our vaccines provide protection against just four strains that are deemed to be the most hazardous, and they have to be selected every year since influenza keeps mutating. A broader approach wouldn’t just mean better protection against the range of flu viruses—it could mean not having to get a shot every year. Most adults in the U.S. and a huge fraction of children currently don’t get their annual flu vaccine, but if we could give a nasal spray like this just once we might be able to achieve greater rates of immunity to the flu. That means better herd immunity, better protection for the most vulnerable among us, and more lives saved. The potential llama-inspired spray is admittedly a long way off—it’s only in mice trials right now, and it’ll still have to go through extensive testing—but it has the potential to be a life-saving solution.