No, you can’t get the flu from a flu shot

Yes, you should get the vaccine now. Flu vaccination prevents millions of flu-related illnesses and deaths annually, but vaccination rates are low for many reasons.

During the 2018-2019 flu season, the Centers for Disease Control and Prevention reported that about 45 percent of U.S. adults received the flu vaccine. While this is an increase of 8 percent from 2017-2018, it falls way below the national goal of 70 percent of American adults receiving a flu shot.

One of the common myths that leads people to avoid the flu shot is that they think the shot will give them the flu. But that is simply not true. The virus in the vaccine is not active, and an inactive virus cannot transmit disease. What is true is that you may feel the effects of your body mounting an immune response, but that does not mean you have the flu.

I am a nursing professor with experience in public health promotion, and I hear this and other myths often. Here are the facts and the explanations behind them. 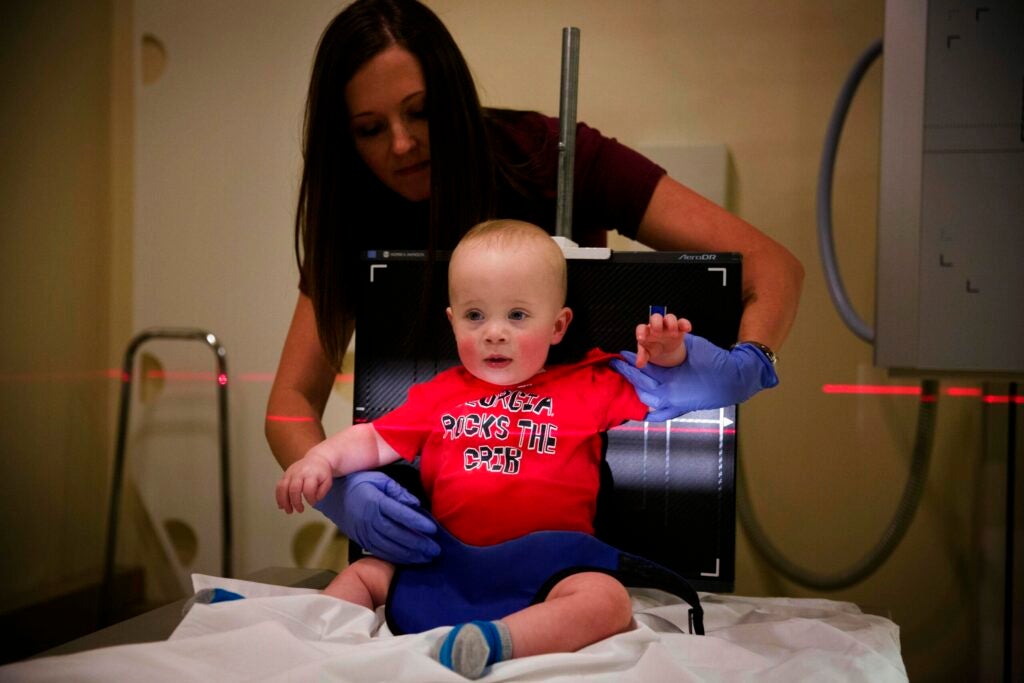 Kilian Daugherty, 1, being prepared for a chest X-ray in Georgia because of flu symptoms.

Influenza, or the flu, is a common but serious infectious respiratory disease that can result in hospitalization or even death. The CDC estimates that during a “good” flu season, approximately 8 percent of the U.S. population could get the flu. That is roughly 26 million people.

Each year the flu season is different, and the flu virus also affects people differently. One dangerous complication of the flu is pneumonia, which can occur when your body is working hard to fight the flu. This is particularly dangerous in older adults, young children, and those whose immune systems aren’t working well, such as those receiving chemotherapy or transplant recipients.

Historically millions of Americans get the flu each year, hundreds of thousands are hospitalized, and tens of thousands of people die from flu-related complications. During the 1918 flu pandemic, one-third of the world’s population, or about 500 million people, were infected with the flu. Since that time, vaccine science has dramatically changed the impact of infectious diseases.

The cornerstone of flu prevention is vaccination. The CDC recommends that everyone 6 months of age and older who does not have contraindications to the vaccine, receive the flu shot.

That said, some people may feel sick after they receive the flu shot which can lead to thinking they got sick from the shot.

However, feeling under the weather after a flu shot is actually a positive. It can be a sign that your body’s immune response is working. What happens is this: When you receive the flu shot, your body recognizes the inactive flu virus as a foreign invader. This is not dangerous; it causes your immune system to develop antibodies to attack the flu virus when exposed in the future. This natural immune response may cause some people to develop a low-grade fever, headache or overall muscle aches. These side effects can be mistaken for the flu but in reality are likely the body’s normal response to vaccination.

And the good news is these natural symptoms are short-term side effects compared to the flu, which can last much longer and is more severe. It is estimated that less than 2% of people who get a flu shot will develop a fever.

Also, people often confuse being sick with a bad cold or stomach flu with having influenza. Influenza symptoms can include a fever, chills, sore throat, runny or stuffy nose, body aches, fatigue, and headaches. Cold symptoms can be similar to the flu but are typically milder. The stomach flu, or gastroenteritis, can be caused by several different bacteria or viruses. Symptoms of gastroenteritis involve nausea, vomiting, and diarrhea.

Some people do get the flu after they have received a flu shot, but that is not from the shot. It can happen for a couple of reasons.

Bottom line: You cannot get influenza from getting the flu vaccine. As someone who has treated many people who do get the flu, I strongly urge you to get the shot.

*Libby Richards is an associate professor of nursing at Purdue University.

This article was originally featured on The Conversation. *