The 13.3-inch display is very interesting, even at a time when folding displays are in flux. 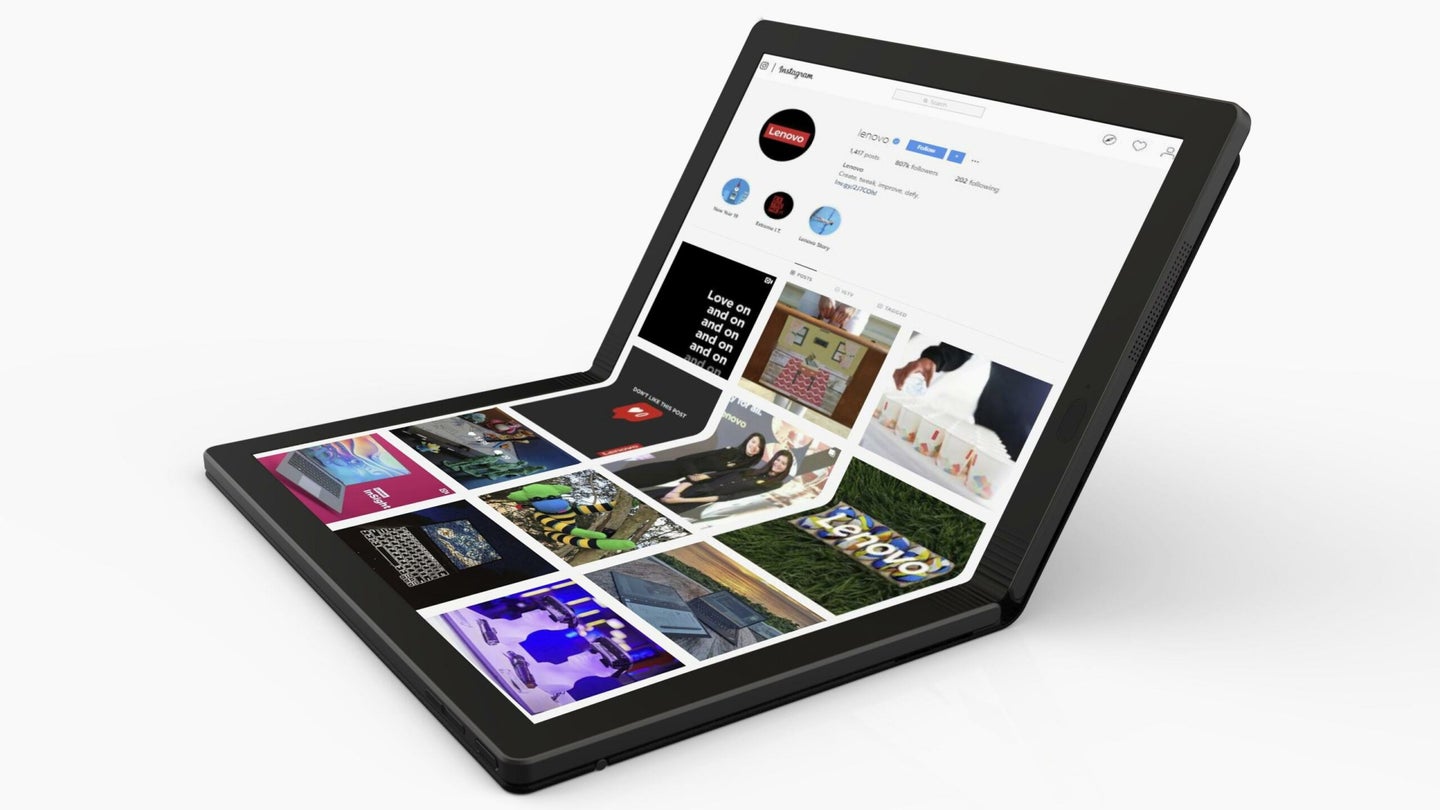 Lenovo’s new folding-screen laptop isn’t the kind of gadget we typically write about here at Popular Science, and that’s because it’s not fully baked. There’s no price, for one, and the most specific info we have regarding an actual release date is sometime in 2020. It doesn’t even have a name. What makes this prototype worth talking about is the timing of its announcement, which occurred at a moment when consumers are trying to decide how they feel about folding screens on the whole.

The new Lenovo laptop, which is part of its ThinkPad X1 family, has a 13.3-inch OLED display that stretches across the entire face of the device, save for some bezel that surrounds the screen. There’s no keyboard. Instead you can rely on a software keyboard that appears in the bottom half of the screen’s user interface, or connect a wireless keyboard to use the Lenovo like a typical flat display. It has a 1920 x 1440 pixel resolution and an Intel processor inside.

The screen will work in a variety of different orientations, so if you want to hold it like a traditional book by leaving it halfway open, you can, at least in theory.

Isn’t this thing going to break like the Galaxy Fold? Though Samsung’s folding smartphone is physically smaller than Lenovo’s prototype, the early failure, or at least delay, of the Galaxy Fold casts a dark shadow over the Lenovo laptop and any other device at the moment that boasts a folding screen. The Galaxy Fold was initially supposed to easily transform from an oddly-skinny smartphone into a kinda small tablet with a simple flip. Unfortunately, early review units had endured a bevy of screen problems and the company pushed the Fold’s release back indefinitely.

Samsung’s troubles occupied a huge swath of the tech news cycle, and even crept into the mainstream news. My dad—who only begrudgingly uses a smartphone in the first place—called me to see if I had tried the “broken foldy phone.” So, when news of Lenovo’s even bigger bendable display hit, the parallels were immediate, but there are some key differences between the two technologies.

The actual crease in the screen is different between the two devices. While the Galaxy Fold had a very tight fold that made a crisp line, the Lenovo seems to have a looser curve that’s less likely to leave a permanent gutter down the middle of the display. It’s a move that makes a lot of sense since it’s using a screen made by LG, a company which has been showing off its own flexible OLED TV that rolls up into a tube when you’re not watching it. Laptops don’t necessarily need to close as tight as phones, which are constantly in and out of your pocket with countless opportunities for change or trail mix or whatever you keep in your pockets to slip in between the screens and cause scratches.

Like the Galaxy Fold, the Lenovo requires a screen protector, but the edges of it are tucked into the bezel surrounding the screen, so there’s no temptation to peel it off and trash the entire device like what some people did with some of the Samsung review units.

So, are folding devices definitely going to take over?

Only time will tell where folding screens fall in the great record of gadget history, but both Microsoft and Google (with its latest version of Android) are working on native support of folding devices in their respective software platforms. Corning—the company responsible for many of the tough glass displays on smartphones right now—says that it’s working on foldable glass that would be a lot more durable than the plastic, even without an additional screen cover. And then there’s always the Huawei Mate X folding phone, which looks really promising, assuming it doesn’t fold under the pressure. Sorry, we almost made it to the end without that joke.