A gadget that opens to reveal a bigger display answers an age-old screen-size issue. 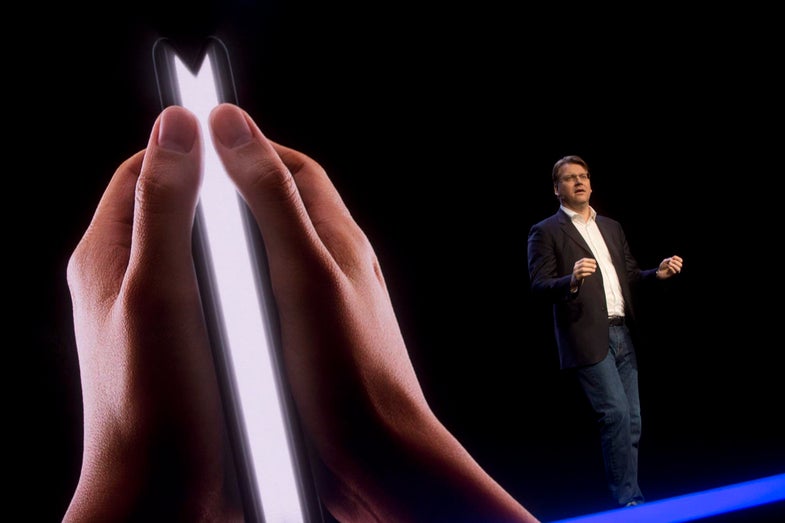 Samsung showed off a device that can fold open to reveal a bigger screen on November 7. Samsung
SHARE

Remember the first iPhone? The screen was 3.5 inches in size, measured diagonally. Fast-forward to 2018, and the display on the iPhone XS Max is much bigger: 6.5 inches on the diagonal. The expanding-screen pattern is pretty clear. Another fact is also obvious. Bigger screens mean that the smartphone itself must get bigger, too. When manufacturers run out of bezel to eliminate, the only option for a bigger screen is a larger device. But a forthcoming gizmo from Samsung offers a different way to make a screen larger without jumbo-sizing the overall device: it folds open, like a book.

Folding phones may seem strange after years of holding inflexible solid glass and metal devices, and they may well be a gimmick. But Chris Harrison, an assistant professor in the Human-Computer Interaction Institute at Carnegie Mellon University, says that folding screen tech on gadgets is “inevitable.” That’s because the technique disconnects the size of a device’s screen from its footprint. Think about a newspaper: the opened paper page you read is bigger, of course, than its size is when it’s folded up.

Other companies besides Samsung have been working on technology that can fold or bend: for example, LG demonstrated a rolling 65-inch TV screen at CES in January.

“People have known that this [kind of tech] has been coming for a long time,” Harrison says. “Whoever gets there first in the market is going to have a competitive advantage.” There are reports about the likes of Huawei and Lenovo pursuing tech like this, too.

Researchers have actually been thinking about this idea for years. In fact, one 2008 paper by computer scientist Johnny Lee explored the idea of a display that could unfold like a newspaper, unroll like a scroll, spread out like a hand fan, or even open like an umbrella.

Here’s what we know about the new folding phone concept from Samsung, which also, of course, makes the distinctly non-bendy Galaxy Note and Galaxy S line of handsets.

We have specs for @Samsung's front and main folding displays. You're not going to want to live in the front screen much. pic.twitter.com/QyTurX0mr5

The device isn’t a thing you can buy yet. The company showed the concept off at the Samsung Developers Conference earlier this month; they’ve dubbed the folding screen the “Infinity Flex Display,” and in a statement, describe the gadget as “a compact smartphone that unfolds to reveal a larger immersive display for multitasking and viewing content.”

It will have a screen on the front—like the cover of a book—and a main bendy screen on the inside. The cover-like screen will reportedly measure 4.58 inches on the diagonal, and the unfolded display will be 7.3 inches diagonally, which puts it somewhere between an iPhone XS Max and an iPad Mini. The resolution on the two screens will be 840 by 1,960 pixels, and 1,536 by 2,152, respectively.

A folding display will have some obvious tradeoffs, Harrison says. One obvious point: you can’t use glass, which is more scratch-resistant than the flexible plastic or polymer alternatives. “There’s a very good reason we use glass” on the smartphone screens of today, he says. “It is a very durable medium.”

And of course, a traditional smartphone doesn’t have moving parts, besides the buttons, a design scheme that makes it more robust.

That’s not true of a folding device, which by their nature, must hinge. “If you’re opening and closing this 50 times a day, times the lifetime of the phone, you better believe there will be failure,” he adds. (Indeed, by one recent estimate, Americans eyeball their phones 52 times daily, on average; if some of those looks include unfolding a device, that could mean a lot of movement for the gadget.) “It’s a real engineering challenge to have something that’s truly bendable, and looks as good as a modern OLED [screen].”

But while those are some potential drawbacks, the benefits of a foldable device are clear: a smartphone-sized form-factor can grow to have a tablet-like screen, possibly changing the way people use phones (and making small tablets, like the iPad Mini, feel even less relevant).

We just announced support for foldables at #AndroidDevSummit, a new form factor coming next year from Android partners.

You can’t buy one of these devices, because they’re not on the market yet. That might change in 2019. According to a news report from South Korea, it could go on sale in March. It could be called the Galaxy F, and it might be very pricey: in the ballpark of $1,770. For comparison, an iPad Pro starts at $799, but that number can creep up to $1,899 if you get the largest size, the most storage, and a cellular data connection. (Pro tip: don’t fold your iPad.)

A folding device will need software that knows how handle the new bendy world, which in this case is Android’s job. The operating system and apps should be able to contextually change how they display information on a device with multiple screens. “For example, start a video with the folded smaller screen – and later you can sit down and unfold the device to get a larger tablet-sized screen for a beautiful, immersive experience,” Stephanie Cuthbertson, director of product management at Google, wrote on the Android Developers Blog. “As you unfold, the app seamlessly transfers to the bigger screen without missing a beat. We’re optimizing Android for this new form factor.”

If you’re on the market for a new smartphone, your best bet is to obviously buy one of the traditional, stiff ones on the market now. Excited about a device that can fold? You’ll need to wait until next year to see what the actual options are. And maybe someday in the future we’ll get a folding umbrella-style tablet from Samsung that works as a rain-blocker in a pinch, too.