The Surface Neo and Surface Duo won't be on shelves for a year or more. 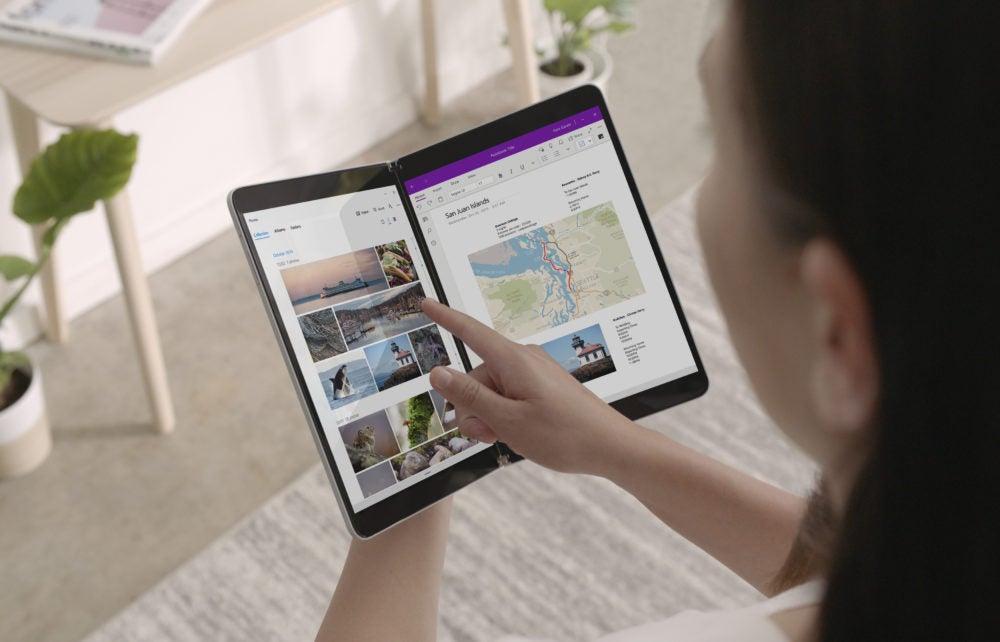 Microsoft’s hardware lineup can be tricky to navigate. It’s a maze of oddly similar product names attached to various flavors of laptops, tablets, and devices that live in between. Quick, what’s the difference between the Surface Laptop and the Surface Book? At a press event in New York City this morning, however, the company announced some truly interesting new dual-screen gadgets, which are still deep in the development phase and won’t debut on the market for more than a year (the official estimate claims holiday season, 2020). The timing is one of the most compelling parts of the whole announcement.

Microsoft’s Surface Neo is a dual-screen tablet that draws immediate comparisons to the Courier project the company introduced way back in 2008. It’s not a folding screen, but rather a pair of screens attached with a hinge. You can pick it up and use it horizontally, or you can set it down and use it as a laptop.

A magnetic keyboard snaps into place on the bottom screen so you can type normally. It leaves a small bar of touchscreen exposed along the top of the keyboard to work like Apple’s controversial TouchBar. When you’re done typing on the Neo’s keyboard, it folds away.

The Neo uses an Intel processor and runs a new version of the Microsoft OS called Windows 10X, which means you can run typical Windows apps, as well as more familiar web apps. It’s a more hybrid experience across the board.

On the other side of the dual-screen coin, Microsoft also announced the Surface Duo. Unlike the Neo, this smaller, phone-like device runs a mobile processor and replaces Windows with a version of Android that Microsoft says it worked with Google to create.

It draws immediate comparisons to the Galaxy Fold, but Microsoft is explicit about the fact that the Duo is a two-screen device. The hinge in the middle has clear-cut uses, like keeping two tasks or windows separate with a distinct boundary.

By now, we typically expect to see finished devices—or at least close to that—at press events. After all, why wouldn’t a company want to take advantage of the hype cycle and start selling gadgets as soon as possible? Microsoft, however, says that the Duo and the Neo won’t hit the market for a year—or more—if production and design issues pop up.

That timing puts Microsoft in a curious position. On one hand, the company knows that talking about its products this far in advance gives its competitors a heads-up about its plans. Microsoft actually acknowledged this idea in the early look at the Duo it gave to Wired. Microsoft’s Chief Product Officer, Panos Panay, is cagey about revealing too much about the final camera design. Right now, users would have to flip open the device and use the front-facing in a rear-facing configuration, which sounds clunky and time-consuming. It sounds like there’s a plan to fix it, but we don’t know what that is.

The other caveat about releasing information about a product like this a year in advance comes from the 2008 Courier project. Microsoft’s first two-screen device design is a regular example tech writers use when it comes to vaporware products that made big promises and never came to market. Apple had a similar, though smaller-scale issue, earlier this year when it canceled its AirPower wireless charging product because it couldn’t get the final design to work. I believe it’s a net positive that the company realized the product’s limitations and didn’t force out a sub-par product, but the general reaction to the cancellation was negative.

However, Microsoft clearly watched Samsung’s glut of issues with its Galaxy Fold phone, which it had to delay and re-release after early users encountered serious durability issues. The Microsoft Neo and the Duo both fold, but there’s no crease in the surface of the screens themselves, which means Microsoft can use more durable glass for each display and encase the hinge securely to keep out crud.

Microsoft’s official reason for the early announcement is so that developers can get on board. The company clearly considers this a new segment of devices that it expects to stick around. Launching into a market in which consumers can immediately start taking advantage of the new design is a lot more satisfying than relying on the novelty of the device to carry its appeal until developers start making things that really capitalize on it.

There are still more traditional folding devices on the horizon, including whatever refinements Samsung makes to the Galaxy Fold, a reported phone from Huawei, and possibly Lenovo as well. But, if Microsoft has its way, the future of fold won’t have a crease but will embrace the hinge.