A closer look at Samsung’s new gadgets, including the Note 10 smartphone and Galaxy Book S

A new smartwatch, a high-end tablet, and a surprising laptop with a mobile chip. 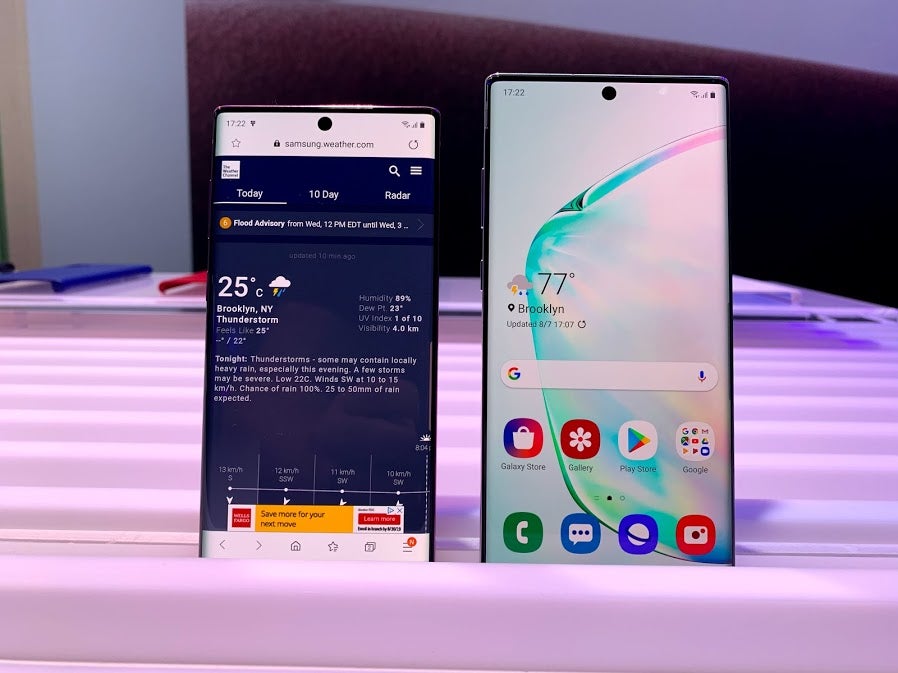 Samsung makes a ton of gadgets and the company updated a wide swath of them this week. Those updates included its massive Galaxy Note 10 smartphone and a unique Windows 10 laptop with a mobile processor inside. Here’s a rundown of everything Samsung announced as well as a look at how it compares to competing products from other big manufacturers.

The key announcement from this week’s electronics onslaught comes in the form of the Note 10. You can take a more in-depth look at them here, but it’s worth noting that there are two different versions of the Note 10, which is a first for the line. Both employ the Snapdragon 855 processor, but the $949 Note 10 totes a 6.3-inch screen, while the $1,099 Note 10+ pushes all the way up to 6.8 inches, which makes it bigger than the largest iPhone, the XS Max with its 6.5-inch screen.

The Note 10+ also comes in a 5G variant, which will start at $1,299 and will work on Verizon’s ever-expanding 5G network if you happen to live in a place where it’s available. If you want access to 5G, Samsung now has two options, including the Note 10+ 5G and the S10 5G. There’s no current iPhone that supports the new faster network, and Sprint recently announced that it’s getting a 5G phone from OnePlus. Judging by the support in its handsets and the amount of time Samsung spent talking about 5G during the presentation, however, it’s clear that moving to the next-gen network is a priority for the company.

Samsung also used its new closer affiliation with Microsoft as a key talking point during the announcement. For instance, you can now use the Dex tech, which allows users to connect their phone to a computer (or just a monitor and keyboard) to get a more desktop-like experience. Windows users can now connect the Note 10 to a Windows 10 PC and perform integrated actions like making voice calls, sending texts, or browsing media. Many of these features sound familiar for users with both a Mac and an iPhone.

Both Google and Apple have upcoming announcements for the Pixel 4 and whatever the next iPhone is called, so we’ll have a complete picture of this high-end smartphone battle by the end of the fall.

This 13-inch, LTE-connected laptop was one of the biggest surprises at Samsung’s announcement event on Wednesday. Skinny laptops are nothing new for the company, but this one uses Qualcomm’s Snapdragon 8cx processor, which is essentially a chip for mobile devices. The device weighs a little more than two pounds and it has a 13.3-inch touchscreen display as well as a full keyboard. So, it’s built like a full-on laptop with tablet or smartphone guts.

While the Snapdragon chip may mean reduced processing power (it also has 8 GB RAM), Samsung says users will get 23 hours of battery life as a tradeoff for the $999 price tag. For $100 more, you could get a new MacBook Air, which adds a half-pound of weight, loses the touchscreen, and sacrifices in battery life. Of course, you’d also get double the RAM and a Core i5 processor that’s meant for a full-fledged computer.

Other PC options like the excellent Dell XPS 13 provide even more raw power, but that also comes at the cost of battery life and the ultraportable nature of a two-pound machine like the Galaxy Book S.

Saying its name—the Watch Active2— is a workout in itself, but Samsung’s new fitness-oriented smartwatch makes some important updates to the previous model. Now there’s a touch-sensitive bezel around the round screen. Drag your finger around the edge to navigate menus, change settings, or switch faces quickly and simply. I tried it last night at the event and it works as you’d hope. It’s not quite the same as the physically rotating bezel from previous Samsung smartwatches, but it serves basically the same purpose and takes up less screen space.

Not all the features are totally ready yet. ECG functionality for close tracking of your heart rate won’t be live when the device launches, but the company expects to turn it on with a future software update, which was the same path Apple took with its Watch 4.

The Galaxy Watch Active2 comes in 40mm and 44mm case widths, which straddle the 42mm singular option of the previous model. And while Apple teamed up with Nike for its special-edition Watch, Samsung tapped Under Armour for its upgraded workout option. There’s not a ton of concrete info about the Under Armour edition the moment, but it will have a tight integration with the apparel company’s connected footwear.

Lastly, Samsung introduced its high-end tablet, the Galaxy Tab S6. it has a 10.5-inch AMOLED screen and it integrates tightly with the S Pen stylus Samsung bundles into the Galaxy Note smartphones. Like the Note 10, the Tab S6 works with the Dex platform for use with a keyboard and monitor (or as a companion to a Windows computer), but the company also offers a new keyboard case with a built-in trackpad to make using it more like a regular laptop.

As for its competition, Google has announced that it’s not making any more tablets, at least for the foreseeable future, so the closest comparison is likely the smaller iPad Pro. The 11-inch iPad Pro, however, starts at $799 compared to the slightly smaller Tab S6 at $649 to start. Samsung also includes the S Pen stylus, while you’ll have to shell out the extra $100 for an Apple Pencil with the iPad. As a tradeoff, the iPad offers more overall computing power and, of course, access to the new iPad OS coming down the line.