In addition to being scientifically important, Karl Deisseroth's research makes for some really cool-looking pictures 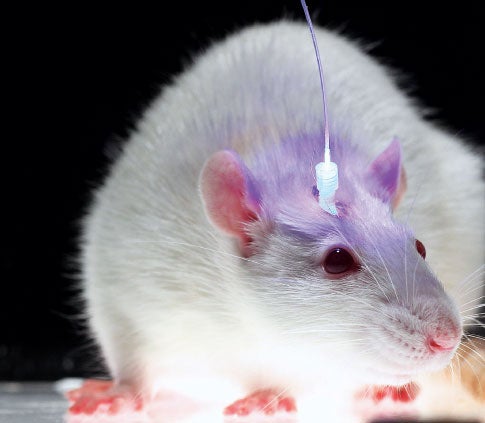 The scientist who figured out how to make organs see-through and how to control brain cells with laser light is getting a shiny new award today. Psychiatrist Karl Deisseroth, a Popular Science Brilliant 10 alumnus, is getting the Lurie Prize in Biomedical Sciences. The prize is for his work on two lab techniques that neuroscientists now use widely to study autism, Alzheimer’s disease, depression, and other brain disorders.

In addition to being scientifically important, Deisseroth’s research makes for some really cool-looking pictures. Take a gander: 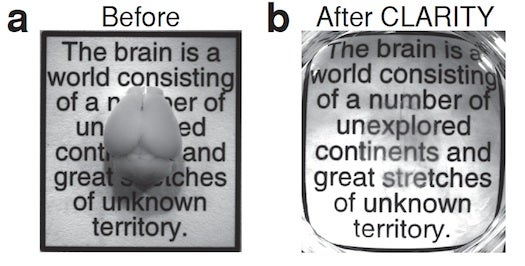 The mouse brain above has undergone a process called CLARITY, which Deisseroth created. Through a series of chemical reactions, CLARITY stabilizes organs taken from an animal or human and makes them transparent to the naked eye. The technique allows scientists to look into organs in a whole new way. It works on many mammalian organs, whether taken from lab rats, or people who have donated their bodies to science.

The rodent at the top of this story is being studied with a technique called optogenetics, which Deisseroth pioneered. Scientists genetically engineered the mouse so that its brain cells turn certain genes on or off when scientists shine laser light onto them. The light enters the mouse’s brain through that optical fiber you see in the photo. Optogenetics lets scientists perform experiments on genes they may be associated with certain disorders, but whose functions are mysterious. For example, say 20 percent of people with autism don’t have Gene A, but scientists aren’t sure what Gene A does. They could turn off Gene A in a mouse’s brain and see what happens next. The mouse’s reaction could provide a clue about what Gene A does in people and why it’s missing in certain patients.

Deisseroth’s latest award comes from the Foundation for the National Institutes of Health, a charity Congress established in 1990. The prize itself is young, with only two previous winners: the scientist who created CRISPR, a cutting-edge genetic engineering technique, and the scientist who discovered Toll-like genes, which are crucial to the immune systems of many animals, including humans. Deisseroth, who sees patients and leads a lab at Stanford University, will get $100,000 as part of the prize.