Dynamite with a laser beam. 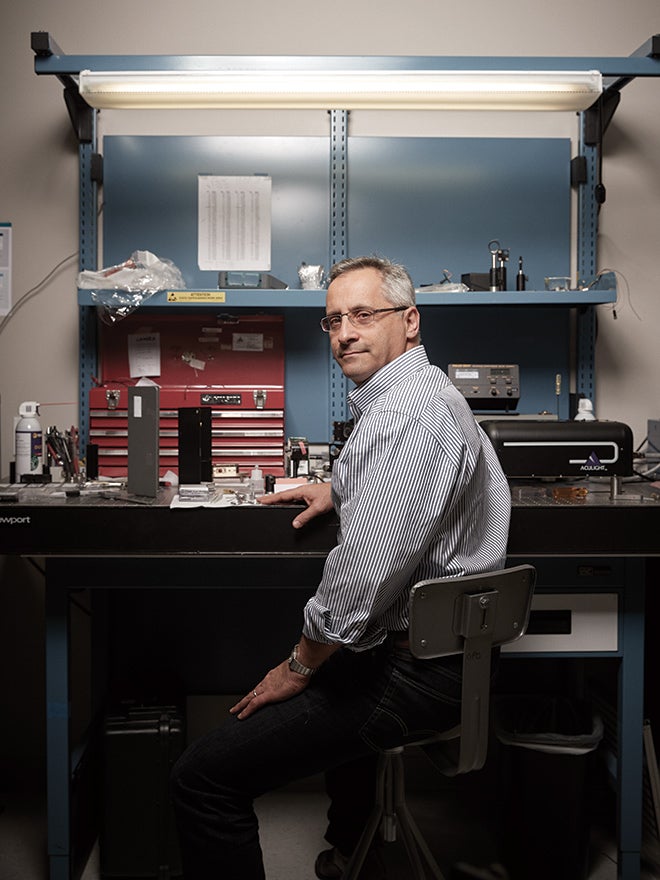 Lasers can map planets, cut metal, play your old CDs, zap tattoos, and send cats into furry frenzies of clickbait. But Robert Afzal, who leads Lockheed Martin’s advanced laser systems program, wants them to do more. He wants them to shoot stuff. Really big stuff. From the time scientists figured out in the 1960s that they could wield these intense beams of light as tools, the U.S. military has wanted one that can blast enemy missiles from the sky or fry a hole in a battle tank. “It’s 2018, and everyone’s wondering why we don’t have this technology yet,” Afzal says. Thanks to him and his team, we now do. Early last year, they delivered the most powerful laser weapon on the planet to the U.S. Army. It is a 60-kilowatt-class blaster whose targeting dome, laser generator, and power and control hardware can be mounted on a truck and sent into battle.

So why did it take so long? Because it’s really difficult. Ever since researchers began pondering the real-world potential of these science-fiction staples, three things have stymied them: the need for huge solid-state batteries or big tubs of chemicals to operate the lasers, assembly dimensions more comparable to 747s than nimble battlefield vehicles, and the thorny problem of light diffusion—the beam’s ability to retain its intensity between source and target.

“Beam quality is a great challenge,” Afzal says. “If you don’t have good quality, it’s like a Hollywood spotlight—very bright, but you don’t blow anything up.”

Before training his laser focus on blasting stuff, Afzal aimed it at a far more pacific pursuit: interplanetary exploration. He spent much of his career, from 1992 to 2001, at NASA’s Goddard Space Flight Center, where he led the development and integration of lasers into space probes, such as the Mars Global Surveyor. In 2008, Lockheed ­acquired Afzal’s then-employer, Aculight ­Corporation, and Afzal began applying his know-how ­toward Lockheed’s weapons program.

From the start, the challenge in weaponizing light was jacking up the laser’s horsepower to levels that could melt metal at a meaningful distance—going from, say, the 1,000 watts you’d find in an industrial cutting tool to between 30 kilowatts and 100 kilowatts or more for a weapons-grade model. Chemical lasers could achieve such performance, but they required unwieldy mixtures to generate the beam. While electrically powered solid-state lasers didn’t have that drawback, they also didn’t have the power—initially. Afzal found inspiration in the telecommunications industry.

Engineers there had realized that fiber-­optic cables, which are great for ­transmitting data via lasers, could also boost the light beam’s energy. Going further, Afzal found that by bundling multiple fiber-optic-enhanced lasers, he could generate enough juice—with high-enough beam quality—to toast enemy hardware from as far as a mile away. Thus was born the “beam combined fiber laser,” a scalable system that laser engineers can dial in to produce a variety of powers.

Because the laser is electric, it’s efficient. It has an unlimited magazine, and its capabilities will only improve as researchers are able to squeeze more from systems across the spectrum. So, in theory, it might someday lead to sci-fi’s elusive Holy Grail: the handheld laser blaster. On that, Afzal is understandably cagey but still optimistic. “As systems get smaller and more efficient, and battery technology gets better, one would expect you could one day have a handheld system,” he allows.