How do you keep an exhibit up to date when the data is still rushing in? 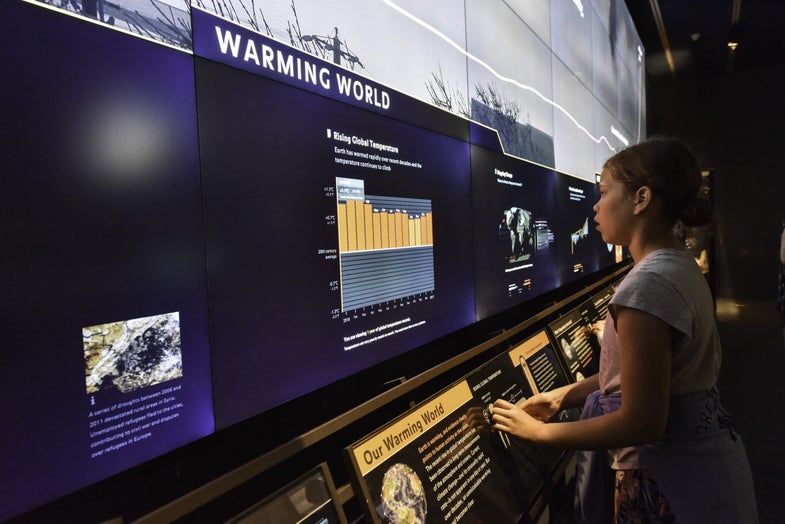 Curators hope the interactivity of the exhibit will help visitors get a grasp on the data. © AMNH/D. Finnin
SHARE

Walking under the belly of the fiberglass model of a blue whale, or circling the fossilized remains of T. rex, a visitor to the American Museum of Natural History in New York City gets a glimpse at parts of the world—and moments in history—they might not otherwise experience.

Its collection includes more than 33 million specimens and spans scientific disciplines. There are several exhibits dedicated to human culture, but it’s easy to lose yourself on a museum tour, when hour after hour passes in the company of diverse species, many of which lived long before we walked the planet.

But the Hall of Planet Earth, which reopens July 7 following significant renovations, is different. The first major update since it opened in 1999, it’s set to refocus on something uncharacteristically contemporary and human-centric: climate change. While other spaces in the museum encourage visitors to meander through space and time, the renovations in this hall demand people think deeply about our current moment—and the dynamic processes that brought us here.

“I think many of us share the belief that this is the most important environmental century in the human species,” says Mike Novacek, the museum’s senior vice president and paleontologist. Earth has already experienced five major extinctions, he says. But humans were present for exactly zero of them. Unfortunately, our good fortune has run out. Many experts (though by no means all) believe we are now in the midst of a sixth extinction.

As human activities have generated an unprecedented release of greenhouse gases, the average temperature of the planet has already risen 1.8 degrees Fahrenheit since 1901. Human society, and with it concrete jungles, gasoline engines, and intensive agriculture, has spread to far corners of the globe, reshaping it in the process. Along the way, it appears biodiversity is rapidly disappearing, as research suggests mammal species are dying up to 100 times faster than seen in the past. (At least 69 species of mammals and 400 other invertebrates have gone extinct since 1900, according to the Washington Post.) Whatever statistics you cite, it’s clear the balance that took nature millions of years to strike has unraveled in a single century.

These facts produce a strong reaction, from fear to disbelief to frustration. But, Novacek says, the situation presents an unprecedented opportunity for science and science education—one the American Museum of Natural History felt it must capitalize on. “We have… an ironic opportunity to see a major Earth event unfolding before our very eyes,” Novacek told PopSci in late June, as recorded ocean waves played in the background of the as-yet-unfinished gallery.

Back in 1999, when the hall first opened, scientists were aware of climate change, but it was not yet a pressing political or moral issue. Edmond Mathez, the museum’s curator emeritus in the Department of Earth and Planetary Sciences, says he and his collaborators decided the hall should emphasize fundamental laws governing Earth’s climate, like the relationship between our planet and the sun. Some information on human-driven change was provided, but it wasn’t of central importance.

Curators realized the museum’s “treatment was lacking,” Mathez says, when the Intergovernmental Panel on Climate Change issued a dire report in 2001. It concluded that more than half the change in global temperature seen since 1950 could be connected to human-caused emissions. As scientists collected and analyzed more data, subsequent IPCC reports concluded that figure is closer to 100 percent.

When coupled with the curators’ belief the public needs reputable sources on the topic of climate change now more than ever, this overwhelming evidence convinced the museum staff it was time for a change. But transforming the exhibit to reflect this fact—and making it engaging to visitors from pre-K to old age—would require almost two years of concerted effort.

Visitors can enter the Hall of Planet Earth from two entrances. One door faces out onto Theodore Roosevelt Memorial Hall, which is mostly good for taking selfies with the bronze statue of the former president. (Roosevelt, incidentially, made his first donation to the museum at age 13. It was a red squirrel skull). The other entrance branches off from the Rose Center for Earth and Space and its artsy but walkable white Cosmic Pathway.

However you approach, the 36 55-inch screens, which work together to project a single message about climate change across the room, are rather difficult to miss. “The rapid rise in CO2 levels caused by human activity is warming our climate,” the display may read, accompanied by an image of smoke plumes and a subtle corresponding graph of carbon dioxide levels. In a dimly-lit room full of ancient rocks, this decidedly digital approach feels like a departure from traditional museum design. But museum staff say integrated internet was imperative: The unprecedented rate of climate change would render any printed plaques obsolete within a year, if not sooner.

To tackle history in the making, the natural history museum turned to Vivian Trakinski, director of science visualization, and Lauri Halderman, vice president of exhibition. In collaboration with scientists, user experience engineers, and educators, the design duo created and prototyped new features for the hall. “I think it starts with the data—with the evidence,” says Trakinski. “Essentially what we’ve done is try and create a context in which we can keep updating that information and tell the story as it’s unfolding.”

Beneath the multi-screen digital display (internally called the “meta-message”), there are three sections of interactive material. In each case, users are encouraged by buttons, sliders, and lights to play with climate change data with their own hands.

One segment addresses the most fundamental of climatic questions: what it is, and how it works. Here, for example, the museum addresses things like the carbon cycle and Earth’s relationship to the sun.

A second looks at the consequences of global warming humans beings are already experiencing. “There’s enough evidence of climate change now, through the observed data that we didn’t have to emphasize predictions and forecasts and modeling,” Trakinski says. “It really enables visitors to see that climate change is happening now, in their lifetime.” It’s here, for example, that the curators address Hurricane Sandy’s impact on New York City (though not on the museum itself, as it was relatively unscathed), as well as some solutions that have cropped up in order to cope with this and other disasters.

But it’s a third section, called “Warming Worlds,” that feels like the biggest technological and educational feat. Each of the three data visualizations here starts out at the broadest level, but interested visitors can dial in to the most minute data points. At first glance, one of the maps looks like a simple representation of the observed global temperature since 1880 (11 years after the museum opened, when careful weather recording began in earnest). With a little finessing, however, you can break down the individual variables contributing to climate change, from volcanic activity (which typically cools the planet) to greenhouse gases (which crank the thermostat up). What starts out as an over-familiar line—we already know the temperature is rising—transforms into a malleable tool with new insights to offer.

And those insights really will be new. The museum intends to update the data as new information is released by the National Oceanic and Atmospheric Administration, NASA, or other climate data creators. In many cases, this will happen on a yearly basis, as annual temperature averages are made public.

Similarly, the meta-message can change with the news. If another Hurricane Sandy-style event occurred, for example, curators could incorporate that into the programming. These missives will also likely be adjusted in the short-term in response to visitor feedback, which Halderman and her team will doggedly collect in the next few months following the exhibit’s re-opening. Best of all, many of the methods that went into the redesign will be made public and shared with other museums seeking to tackle similar subjects.

No matter how newsy or screen-centric they might get, the museum’s belief in the primacy of its collections will never waver, according to staffers. “We don’t want this to be a place where people come and watch TV,” Halderman says. When you’re elbow deep in the climate change data, the digital devices can feel as though they’re ready to snuff out 3D objects. But that’s hardly true in the wider Hall of Planet Earth, which is replete with geological specimens and a brand-new globe showing the process of convection.

Circling this brand new model Earth, which serves as a centerpiece for the revamped hall, many of the museum’s messages about climate change become clear. It’s a physical specimen you couldn’t see anywhere else, but it was carefully crafted (and prototyped and recrafted) with cutting-edge digital tools. Partially encased in plastic, it’s transparent, the mustard- and ketchup- colored convection currents barely contained inside its melting borders. The globe appears chaotic, almost alive.

Looking at the sphere, it’s clear that dynamism—defined as the characteristic of constant change, activity, or progress—was always a part of the Hall of Planet Earth, and Earth itself. It’s just that, as humans exert more influence over the planet than ever, recognizing these dynamics is increasing important.