NASA’s Mission To Sample A Killer Asteroid Launches In September

Get ready for OSIRIS-REx 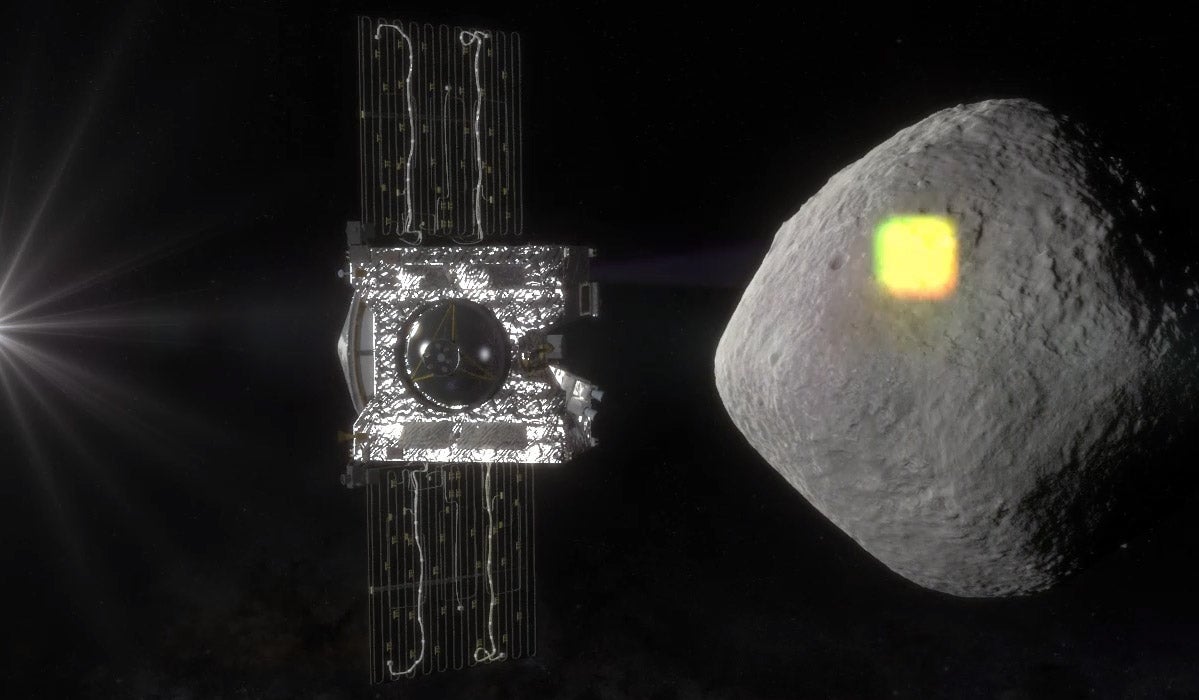 NASA’s OSIRIS-REx mission is visiting an asteroid and bringing us back a souvenir. The spacecraft will travel 1.2 billion miles to 101955 Bennu, where it will collect rocks and pebbles off the asteroid’s surface and carry it all back to Earth. The mission is slated for takeoff on September 8, and will return with its special delivery in 2023.

America’s first mission to sample an asteroid comes much later than Japan’s Hayabusa mission, which brought back a sample of the asteroid 25143 Itokawa back in 2010. But Bennu is different. It’s made of carbonaceous rock, which holds important clues about the origin of life in our solar system.

“This kind of object is what we think at least seeded the Earth with the proto-materials for life, if not life itself,” says Bashar Rizk, a senior staff scientist on the OSIRIS-REx team. (The mission’s name stands for Origins Spectral Interpretation Resource Identification Security — Regolith Explorer.)

Analyzing Bennu’s ingredients could reveal the presence of amino acids or other organic molecules that tell us a little more about how life on Earth came to be.

Technically, OSIRIS-REx won’t be the first sample return mission to a carbonaceous asteroid. Japan will beat us to that, too, with its Hayabusa-2 mission which launches in 2019 and will return a sample in 2020. Still, you can never have too many carbonaceous asteroid samples, and OSIRIS-REx has a secondary mission that could turn out to be just as important.

Asteroids might have brought the ingredients of life to Earth, but they can also bring death and destruction.

101955 Bennu is considered one of the most dangerous asteroids in the solar system. It’s not terribly large–about 1,600 feet in diameter–but in the year 2135, it will come within 186,000 miles of the Earth. That’s closer than the moon. And models estimate that it has about a 1-in-2700 chance of striking the Earth.

Using an online calculating tool, Rizk estimated for Popular Science what the impact of such an asteroid would be. The asteroid would probably break up about 50 miles above the Earth, releasing the energy of about 2750 megatons of TNT. If you were standing about 5 miles away from Tucson (where Rizk lives), the effects would be devastating. He writes in an email:

Don’t panic yet. Scientists don’t know for sure whether Bennu is on a collision course with Earth, or where it would hit if it is. Thankfully, OSIRIS-REx will solve some of that uncertainty.

The trajectory of space rocks depends not just on gravity, but other factors as well. One is called solar radiation pressure. Like wind, the photons streaming from the sun carry momentum, and when they crash into an object they can exert a slight push on the object.

Another factor has to do with heat. The sun heats an asteroid unevenly, giving it one hot side and one very cold side. Just like the flames from the backend of a rocket, that hot side can push the asteroid in the opposite direction. This is called the Yarkovsky effect. Although the effect is tiny, over time it can lead to dramatic changes in an asteroid’s orbit.

The Yarkovsky effect is different for every asteroid, depending on the object’s size and shape. “To know the Yarkovsky effect for a specific body, you’ve got to go and look,” says Rizk. “It’s never been done before.” But that’s exactly what OSIRIS-REx will do.

By measuring the asteroid’s thermal and radio emissions, OSIRIS-REx will estimate how heat from the sun is influencing Bennu’s trajectory. That will give scientists a better idea of whether Bennu will crash into Earth. It may also provide a way to deflect the asteroid if it is indeed on a collision course with Earth.

Many asteroid deflection techniques propose using heat–such as detonating a bomb in front of the asteroid–to throw the rock off course. Knowing the Yarkovsky effect on Bennu will help scientists figure out how much heat is needed to put the asteroid on a safer path.

OSIRIS-REx will be mapping Bennu’s contents and structure, which could inform companies that hope to mine asteroids in the coming decades.

Armed And (Not Actually) Dangerous

The spacecraft won’t be landing on Bennu to collect all this information. Instead it will fly close, and when it comes time to pick up a sample of regolith, it will extend its 10-foot arm and ever so gently bump it into the asteroid. A cup on the end of the arm will suck up a sample (“It’s almost like a reverse vacuum cleaner,” says Rizk) and store it away in a sample return capsule that looks like a one-meter-wide muffin.

The spacecraft is carrying three bottles, which means it will have three chances to get a good sample.

OSIRIS-REx will depart from the asteroid in 2021, carrying up to 60 grams (that’s about two ounces) of asteroid dust.

It’ll take two years for the spacecraft to get back to Earth. Once it does, it will eject the muffin-shaped sample return capsule, which will parachute down to Earth and land in Utah.

With its mission accomplished, OSIRIS-REx itself will keep on going until it retires in an orbit around the sun.