IBM’s Watson Made Me A Kebab

Designed it, anyway. And pro chefs cooked it. Recommended! 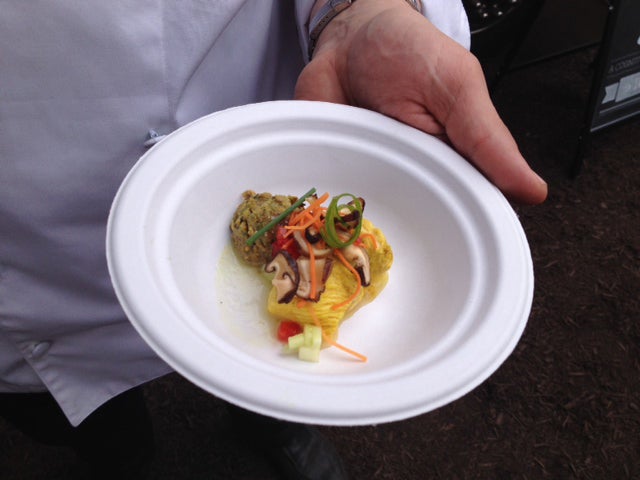 You’ve probably heard of Watson, IBM’s super-intelligent supercomputer that dominated on Jeopardy! not too long ago. Turns out he’s not a bad cook, either.

At South By Southwest, IBM has set up a food truck staffed with chefs from the Institute of Culinary Education, who are whipping up (strange, uncanny, surprisingly tasty) daily recipes dreamed up by the machine.

Here’s the background. For about two years, IBM has been working on a way to harness Watson’s data-driven computing into more creative fields–the kinds of things where, unlike a game show, there’s no one right answer. The first experiment with that has been in the kitchen. By mining a database of freely available online recipes (as well as recipes from professional chefs and a molecular textbook) and estimating which ingredients might combine for a dish pleasing to a human palate, Watson has been creating unlikely culinary works. The quintillion possibilites–seriously, quintillion–are narrowed down and ranked by presumed tastiness and novelty.

With that data uploaded and organized by type of food, regional origin, and tastiness, the company designed an app that can make logical decisions on what might make for a good dish.

A person piloting the app starts with an ingredient; I chose bacon during a demo from IBM Watson Group researcher Patrick Wagstrom. (Because I am in Austin, I have been walking, and I am hungering for grease.) After that, I selected a region, opting for something English with influences from another country. Watson spit out a list of potential dishes it could make with those restrictions–it seems to be some kind of Michelin-star-worthy soup auteur–and I went with a quiche. Following a second of number-crunching, it showed me a list of ingredients it was planning on using. (Wagstrom admits it’s bugged out a few times in this section, forgetting dough, etc.) A few tweaks later, I had a recipe for a respectable-sounding quiche made with comte cheese. 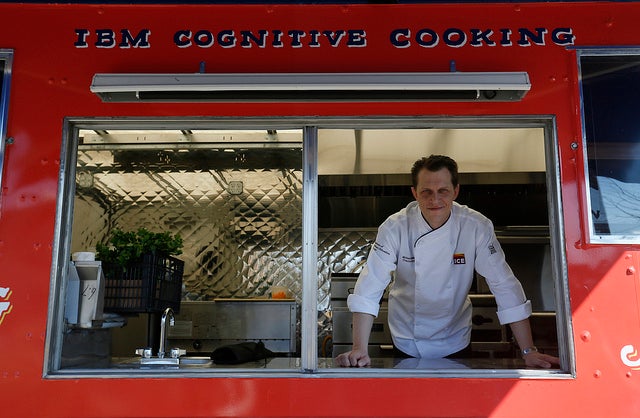 Well, “recipe” might be a stretch. There’s an option where Watson can compute some vague thoughts on how one might cook a quiche (“cook the butter,” “add the cheese”) but nothing you’d feel comfortable taking as gospel. Instead, Watson turns cooking into a game of artificially-intelligent Chopped, giving you the ingredients and letting you mix, combine, and remix to taste. “Watson doesn’t have a mouth,” Wagstrom says.

If you have some talented chefs, though, that could lead to a spark of constraint-induced creativity. At the food truck in Austin, ICE chef Michael Laiskonis, a pastry chef by training, had Watson select a Vietnamese-themed kebab dish that included apple, as determined by an online poll from IBM. Apple isn’t exactly your typical kebab ingredient–and neither are strawberries, which were also included in the recipe–but the result was subtly sweet, and surprisingly pleasant next to a bit of ground pork.

Laiskoni’s been working with Watson for about two years now. “My experience with it has already changed my approach to creativity,” he says. One time, he tells me, Watson requested a dish created by cottage cheese and pork belly. And the result wasn’t bad.

But, Wagstrom says, there’s still the occasional hiccup when you’re dealing with (literally) 1 quintillion potential recipes: “Every once in a while it might recommend lemon juice and cream.” Tweaks are being made.

You can read the recipe and instructions for the apple kebabs below, or check it out at IBM’s site.

2) Arrange the meatballs in a single layer into lightly greased roasting pans and place in a 160˚C/320˚F convection oven for approximately 20 minutes, or until thoroughly cooked. Remove from the oven and season with salt. Reserve.

3) To prepare the curry chicken whisk together the water, oil, 1 tsp lime juice, 1 tsp lemon juice, and ½ tsp curry powder. Marinate the chicken in the curry mixture for about 30 minutes. Transfer the chicken and remaining marinade into a shallow saucepan over low heat, stirring, until chicken is thoroughly cooked, about 10 minutes. Allow the chicken to cool in the marinade. Remove the chicken and cool.

5) Next, make the flash pickled shiitake mushrooms. Sauté the mushrooms in a shallow pan with vegetable oil and season to taste. Add the carrot, ginger, lemon juice, and lime juice. Slowly reduce until liquid has absorbed. Remove from heat. Allow to cool and remove sliced ginger. Adjust seasoning and acidity as desired.

6) To assemble, into each dish place two of the warmed pork meatballs and portioned chicken. Top with a small amount of the diced, apple, cucumber, and strawberry, followed by the pickled shiitake and carrot mixture. Pour a small amount of the pineapple broth into the dish and finish with the scallion, mint, chive, and 1 pinch lime zest. Season with Maldon salt and an additional grind of white pepper