The lander's harpoon anchors didn't deploy, but it looks like Philae will bounce back ... literally 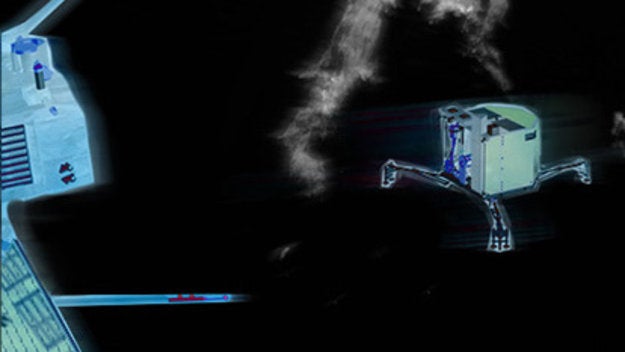 Business Insider is reporting that at least some of the screws on Philae’s feet have dug into the soft surface of the comet.

ESA is about to begin a media briefing on the live webcast. Check back here for more updates!

Here’s what Philae saw on its approach, from about two miles above the comet’s surface. The lander appears to have been right on target.

To learn more about Philae’s landing site, check out this awesome 3D visualization by Sketchfab.

Uh oh. Though ESA confirmed that Philae has touched the comet’s surface, now they’re saying that the harpoons may not have fired to anchor it to the surface. Says ESA: “Without this anchor we cannot with 100 percent certainty state that we are landed on the comet and that we’re fixed on the comet… Everything is proceeding normally.” Now mission scientists are determining what their options are to re-fire the harpoons.

The thrusters that would have pushed Philae toward the surface, to help out in the anchoring process, were also found to be broken yesterday. If the harpoons can’t be re-fired, the lander may have to rely on its screw-tipped feet to try to dig into the surface.

Touch doooooown! Mission control confirms that the lander has reached the surface. ESA scientist: “Philae is talking to us … We are on the surface.”

Hugs all around at ESA mission control.

As ESA stands around wringing its hands and wondering whether the 10-year, $1.7 billion journey was worth it, we are playing this song in the background:

T-minus five minutes (approximately) until we know for sure whether Philae landed safely!

Philae has probably landed already, but we won’t know for sure for another half-an-hour or so — because that’s how long it takes for feedback from Philae, which is 31 million miles away, to reach ESA headquarters. Mission control waits with bated breath.

Rosetta’s 220-pound lander is on its way to the “rubber ducky” comet right now.

Since August, the Rosetta mission has been dancing around a comet that’s 31 million miles away from Earth, preparing to land. Finally, at 4 a.m. this morning, the orbiter and the lander separated. Philae is now dropping toward the comet, and it is expected to settle on the comet’s surface at 11 a.m. EST. If the landing is successful, it’ll be the first manmade object to ever touch down on a comet. Once there, it’ll study the composition of this space-traveling rock to learn more about the early solar system and whether comets could have seeded life on Earth.

As it drops, Philae is taking some initial measurements of the comet’s dust and gas, and it’s also snapping some photos. Here’s the first one that was tweeted from the European Space Agency’s Philae Twitter account, of the orbiter’s underside:

Meanwhile, the view from the orbiter shows that Philae’s legs have deployed successfully.

It could be a rough landing, and the BBC reports that Philae’s thrusters, which were meant to help anchor it on the comet’s surface, were yesterday discovered to have malfunctioned. Fortunately, ESA thinks they can pull off the landing anyway. We’ll keep you posted as we learn more about this epic landing! Meanwhile, you can watch the ESA’s livefeed of the event here.