With Rocket Blown Up, Orbital Sciences Hitches A Ride To Space

While the Antares rocket is in the shop, the Atlas V will bring Orbital Sciences to the ISS 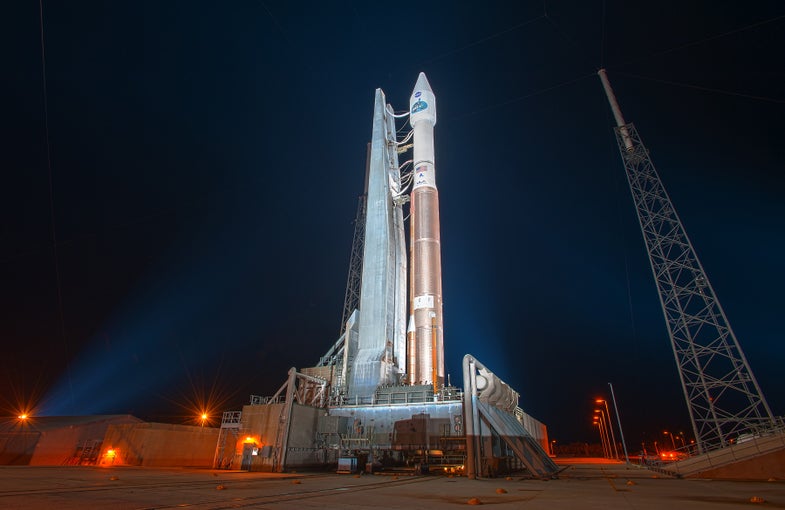 In October, private spaceflight company Orbital Sciences suffered a major setback when its Antares rocket exploded shortly after launching from Wallops Flight Facility in Virginia. Orbital’s investigations revealed that the Antares’ rocket engine – a refurbished Soviet-era design – was ultimately to blame for the crash. So the company decided to shelve the Antares for an unknown period of time as it updates the engines.

However, Orbital still needs to get rockets into space. The Antares rocket that exploded was embarking on an unmanned cargo resupply mission to the International Space Station, sanctioned by NASA through the agency’s Commercial Resupply Services (CRS) program. According to the CRS contract, Orbital Sciences is obligated to provide NASA with at least eight unmanned cargo missions to the ISS. October’s failed launch was supposed to be the company’s third, meaning they have to find a way to get at least five more cargos into space.

Fortunately, United Launch Alliance (ULA) is lending Orbital Sciences a helping hand. Orbital announced that they have officially partnered with ULA, and that their Cygnus cargo ship will launch aboard ULA’s Atlas V rocket sometime late next year. There’s also an option to extend that partnership to an additional launch in 2016 if needed.

There are definitely some perks to the partnership. The Atlas V has a greater lift capacity than that of the out-of-commission Antares, meaning the Cygnus can carry nearly 35 percent more cargo than what Orbital Sciences had originally planned to transport in 2015. And as Universe Today points out, ULA is being very accommodating to Orbital, as ULA’s launch manifest is pretty booked up for the next year and a half. Orbital is lucky to have found an open slot.

Meanwhile, Orbital says that the new propulsion upgrades to the Antares are coming along nicely, and the new engines will allow the updated rocket to lift over 20 percent more cargo than before. According to Orbital, this new lift capability combined with the prowess of the Atlas V means they will be able to complete their CRS contract with NASA in four launches instead of the previously planned five. The company says the changes and partnership will somehow come at no increased cost to NASA, most likely because Orbital had already planned to update the Antares engines in 2017. The crash just pushed everything ahead of schedule.