When Gordon Cooper and Pete Conrad launched aboard Gemini V on August 21, 1965, they were the first astronauts to... 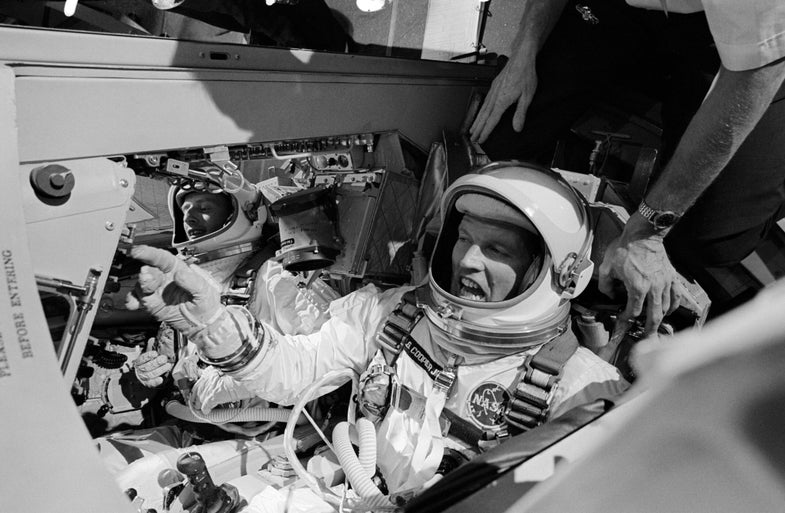 When Gordon Cooper and Pete Conrad launched aboard Gemini V on August 21, 1965, they were the first astronauts to have mission patches sewn into their suits, a patch depicting a covered wagon. The motto of “8 days or bust,” however, had been nixed by NASA management; they worried it would make a shortened mission look like a failure. But the mission managed the full eight days, but it was probably as fun as traversing the country in a covered wagon. The view, on the other hand, was spectacular. 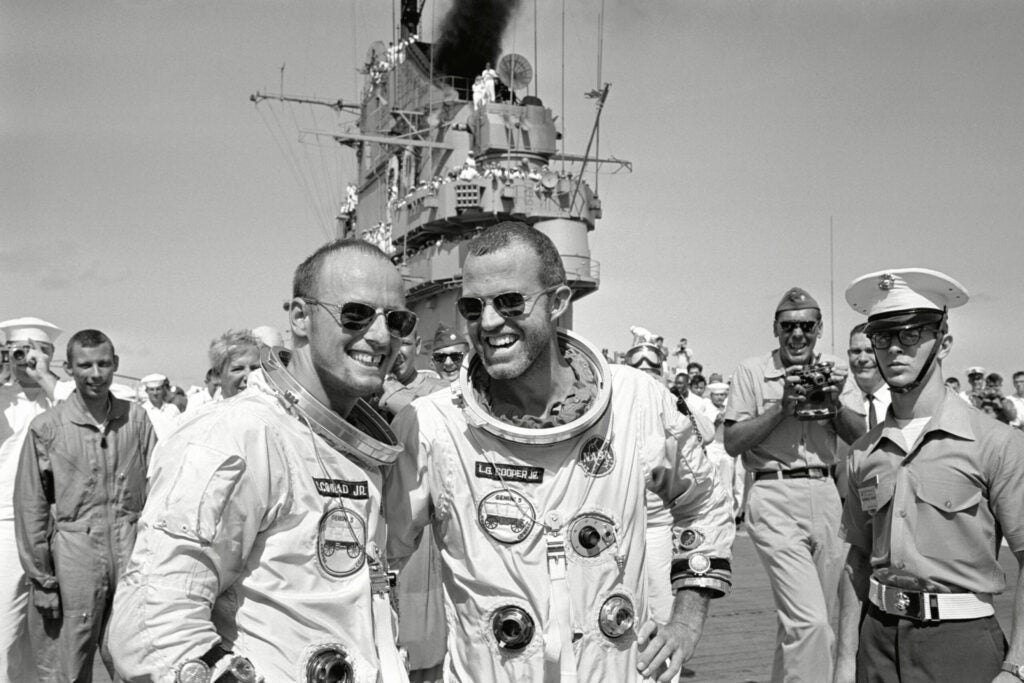 Gemini V was the third manned mission of the program, and among its main goals was a test of fuel cells. Not only could fuel cells meet the power needs of a mission to the Moon where batteries couldn’t, they were efficient, light, safe, and reliable. But most importantly, they provided consumables as by-products. The hydrogen-oxygen fuel cell supplied water through an electrochemical reaction that was both potable and could be used to humidify the cabin environment for crew comfort and health. The eight-day mission duration for Gemini V was the shortest possible duration for a mission to the Moon, so the fuel cells had to be able to last at least that long.

Things started to go wrong not long after Cooper and Conrad launched. Just four hours and 22 minutes into the flight, the crew noticed that their fuel cell pressure had dropped from the nominal 850 psi (pounds per square inch) to 65 psi. This was still above the 22.2 psi minimum for the cell to work, but it did demand that the mission activities be curtailed. The spacecraft was powered down while engineers in mission control did some troubleshooting on the problem. On the seventh orbit, a power-up procedure successfully brought the spacecraft back online.

But the situation on board Gemini V only got worse. Thruster 7 failed on the second day of the flight and thruster 8 failed on the third day. Shortly thereafter, the whole system became erratic and the crew was forced to just sit there and let the spacecraft drift. They had power, and they had to test the fuel cell. It was around this time that both astronauts began cursing their lack of onboard reading material. 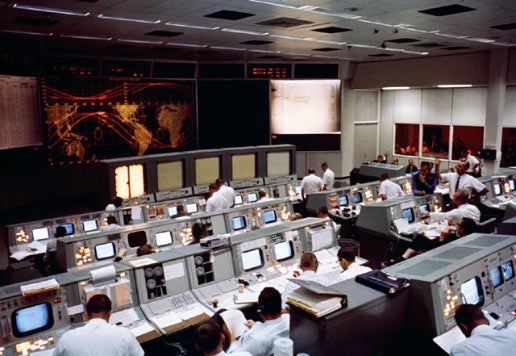 The scene in Mission Control

The crew did have one thing to distract themselves during five relatively dull days in a spacecraft the size of a small car’s front seat: orbital photography.

NASA launched its Gemini missions with unmodified Hasselblad 550C medium format cameras on board that were easy to operate and used film stored in magazines that could be swapped out midway through a roll. And Gemini V had a handful of photography goals to make use of these cameras.

The Synoptic Terrain photography experiment tasked the crew with taking the best, high-quality images they could get. The idea was to increase general knowledge of our own planet but also gather birds eye views of surface features to help geologists recognize and understand surface features on other planets and moons. Of particular interest were the rift valleys extending from Turkey through Syria, Jordan, the Red Sea, and eastern Africa as far south as Mozambique, features that are geologically analogous to the rills found on the Moon. For best resolution, these images were designed to be taken during during maximum daylight with the spacecraft looking straight down.

There was also the Synoptic Weather Photography Experiment that had the astronauts photograph clouds, weather systems, and any storms they happened to find. These images were meant to supplement satellite weather imagery to better understand weather patterns on our planet and perhaps others. There was also a Zodiacal Light Photography experiment on Gemini V. A haze seen at twilight and just before sunrise in the plane of the ecliptic, NASA hoped Gemini V could photograph this strange feature to figure out where it came from.

Gemini V met its goals. And whether it’s because of the type of film and camera the crew used or the lower global pollution levels, the pictures Gemini V took of the Earth are absolutely striking.

Sources: March to the Moon; NASA.