Travel through space without filling up the gas tank. 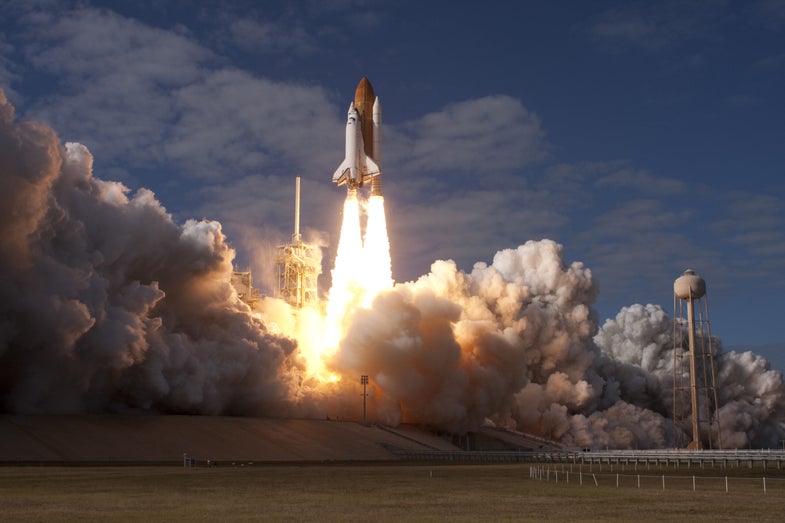 Whenever NASA’s space shuttle was launched into orbit, it made the trip with the help of a very important tagalong: the external tank. Acting as the shuttle’s “gas tank,” the massive orange chamber housed all of the liquid hydrogen fuel—and oxygen to burn it—that powered the ship’s main engines.

It also typically weighed over 1.6 million pounds and cost tens of millions of dollars to manufacture.

Engineers have long searched for a way to “cut the fat” when it comes this style of space propulsion. In other words, is it possible to develop a thruster that can propel a spaceship or satellite forward without needing any on-board fuel? Some think it’s a feat worth pursuing. Others say such an engine is impossible.

A new report from Wired UK details the work of Guido Fetta, an American scientist who claims to have built his own propellant-less thruster. The design is seemingly based on the EmDrive, which was originally created by British scientist Roger Shawyer. The drive is supposed to convert electric power into thrust by bouncing microwaves off the walls of a closed container, and Fetta’s drive, while different, does relatively the same thing.

NASA, a juggernaut in the space travel industry, has validated a propulsion design that many think can’t be made.

So what makes Fetta’s design so special if Shawyer made a propellant-less drive first? Street cred from NASA.

In a paper presented at the 50th Joint Propulsion Conference in Cleveland, Ohio, NASA apparently gave Fetta’s design their stamp of approval after testing his drive. Granted, their tests only produced a small amount of thrust (between 30 and 50 micro-Newtons), but that’s still pretty impressive since absolutely no propellant was needed.

So that means that NASA, a juggernaut in the space travel industry, has validated a propulsion design that many think cannot be made.

“There are other things that are propellant-less that don’t use an onboard storage of molecules or mass,” Michael Baine, chief of engineering at Intuitive Machines, tells Popular Science, noting the example of solar sails that convert light into thrust. “But they’re kind of proof-of-concept … and they’re not necessarily going to get you anywhere fast.”

What makes Fetta’s research particularly interesting is that this kind of propellant-less thrust may showcase an entirely new concept of physics.

According to the NASA researchers who tested the drive, Fetta’s design potentially produces thrust by interacting with “quantum vacuum virtual plasma.” That means the drive is pushing against all of the particles in empty space that are constantly coming into existence and then immediately disappearing. I.e. Empty space isn’t really empty, and conceivably, we can “push” against it to propel forward.

The concept is the main theory behind the quantum vacuum plasma thrusters, or Q-thrusters, being investigated by Harold “Sonny” White at NASA Johnson Space Center (White was also on the research team that tested Fetta’s drive). If these results hold true, that means the quantum vacuum can be harnessed for space travel.

However, Baine says it’s important not to jump to any conclusions. He notes that these experiments are pretty easy to mess up, since you basically have to recreate the vacuum of space for the results to be right. Any interference from an outside factor could affect the results (think back to CERN’s “faster-than-light” neutrinos).

“Whenever you get results that have extraordinary implications, you have to be cautious and somewhat skeptical that they can be repeated before you can accept them as a new theory,” Baine says. “Really, it’s got to come down to peer review and getting that done before you can get any kind of acceptance that something exotic is going on here.”