Why the Soviet space shuttle was left to rot

Just before dawn on the morning of November 15, 1988, the Energiya rocket stood fueled and ready on the launch... 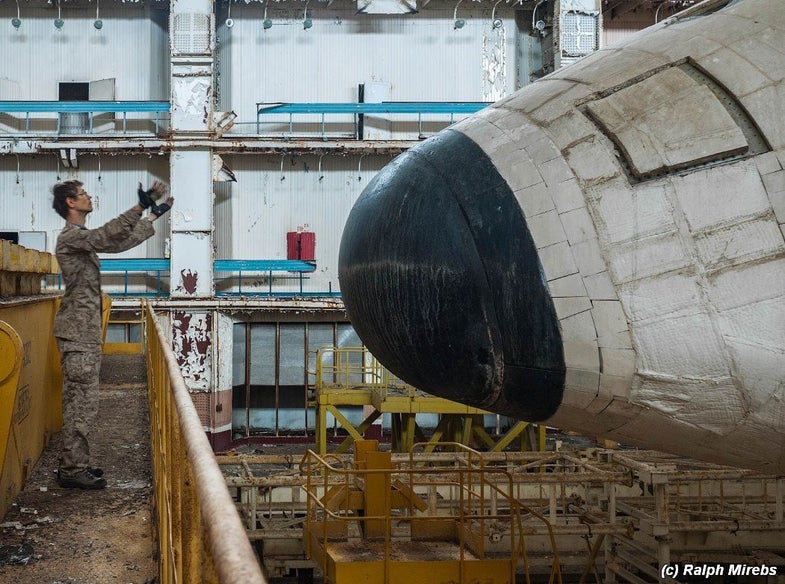 Just before dawn on the morning of November 15, 1988, the Energiya rocket stood fueled and ready on the launch pad at Baikonur, the Soviet Union’s launch site. Mated to the booster was the Buran space shuttle orbiter, ready for its maiden flight. It looked to strongly reminiscent of NASA’s Space Transportation System, colloquially known as the space shuttle, but the two spacecraft weren’t identical.

NASA’s decision to pursue the space shuttle on the heels of the Apollo program came down, in short, to funding. On January 5, 1972, President Nixon announced that NASA would turn its attention to building a new spacecraft to transform the final frontier, something that could shuttle astronauts between the Earth and an orbital space station, though the station would come later. The shuttle would make spaceflight routine while keeping the cost low, thanks in large part to the Department of Defence who would be sharing the cost with the space agency in exchange for using it to launch military satellites.  The announcement of NASA’s shuttle plans didn’t worry the Soviet Union who didn’t have any use for a shuttle; there was no need to compete with the Americans on this program. But that began to change in the mid-1970s.

Unlike America’s national space agency NASA, the Soviet Union did not have a unified body managing its space activities. Instead, different design bureaus managed different projects. In 1974, engineer Valentin Glushko merged the TsKBEM design bureau with his own KB Energomash organization to form a new bureau called NPO Energiya. At the same time, he also took stock of the Soviet’s position in space. A year late, he was not alone in wondering why the Americans were building such a large space shuttle.

There wasn’t much guesswork involved since NASA, being a civilian organization, shared its plans for the new vehicle publicly. But by the Soviet military’s assessment, the shuttle wasn’t economically viable and inexplicably large. It was designed to launch as many as 50 times per year with its 30-ton payload bay full, could return up to 15 tons from orbit, and had an impressive 1,242 mile cross range capability that could support single-orbit missions. It seemed to the Soviets that the United States was positioning itself to build something massive in orbit like a military station or a weapon. The innocuous American vehicle now registered as a threat to which the Soviet Union responded in kind. Without knowing exactly what the American’s had planned, the Soviets decided that duplicating the shuttle was a safe way to match whatever capability the large vehicle would have.

The Soviet shuttle program officially began on February 17, 1976, a vehicle that would counteract the potential American military threat while also advancing the country’s technological and scientific standing in space. Formally called the Reusable Space System, this new spacecraft could, like its American counterpart, fly missions as short as a day and as long as a month, but unlike NASA’s shuttle the Soviet version wouldn’t replace all ongoing programs. Work would continue with the Soyuz and Salyut programs as well as the Mir space station program. Space was about to become a much busier business for the Soviet Union.

The development stage of the program wore on, and after considering a handful of different arrangements the Soviet shuttle design was frozen in June of 1979. The winged orbiter was built to nearly the same dimensions as the American spacecraft with a forward crew cabin housing six workstations, a payload bay with two manoeuvering arms, and a rear propulsion unit. It was designed to ride into orbit strapped to an external tank feeding four cryogenic engines assisted by four strap on boosters. Internally, the Soviet shuttle boasted a sophisticated avionics system that monitored all onboard functions making a cosmonaut an unnecessary part of the system.

On April 12, 1981, NASA’s STS-1 mission launched marking the beginning of the space shuttle program. And still, in spite of attempts to find it, there was no clear indication that the Soviets had built any program to match the latest American development. NASA’s program moved forward, stalling with the Challenger disaster in 1986, and still only scant clues to a new Soviet space program emerged. Then on April 8, 1987, the international relations arm of the Soviet Ministry of General Machine Building acknowledged that the Soviet Union was building a space shuttle. It was called Buran, which loosely translates as “snowstorm on the steppes.”

Like so many new programs, Buran’s first flight was slated to be a two-orbit unmanned shakedown cruise. There would be no complicated fuel cells on board and no need to pressurise the cabin for cosmonauts. The orbiter would simply circle the globe and glide to a runway landing autonomously, proving it was a sound design.

The first launch attempt on October 29, 1988, ended with a mechanical failure; a platform next to the rocket took so long to retract that the rocket’s computer cancelled the countdown. The second attempt on November 15 was free of major technical issues, and at 8:00 in the morning local time at Baikonur Buran lifted into the sky on Energiya’s back. Eight minutes and 2.8 seconds later, Buran separated from the spent Energy core stage and fired its twin orbital manoeuvering units. A little over a half hour later, the Soviet shuttle was in a nearly circular orbit, 158 by 153 miles. An hour later, Buran’s software began its reentry and landing sequence. Battling headwinds and crosswinds, the orbiter landed one second earlier than planned.

The shakedown cruise was a technological success but the program on the whole was not. The Soviet Defense Council approved Buran to run on a scaled-down level through 2000, but when the USSR collapsed in 1991 so did the Ministry of General Machine Building that had developed the Soviet shuttle. The separate design bureaus running individual programs were transferred to the Russian ministry of the Industry, but NPO Energiya was among the bureaus that failed to cooperate in this new arrangement. When these bureaus were eventually streamlined into the national Russian Federal Space Agency in 1992, there was no provision to retain Buran-Energiya. The shuttle left homeless, and though the program was never formally cancelled, it never left the ground for a second mission. Four orbiters in various stages of completion, including one known as Ptichka (little bird) were left to languish. Buran was destroyed in 2002 when the hangar housing it collapsed.

All images save the one of the hangar wreckage are from Ralph Mirebs’ livejournal page, and there are a lot more images that I would high recommend sifting through! Sources: “Energiya-Buran: The Soviet Space Shuttle” by Bart Hendrickx and Bert Vis; “Photos: Soviet shuttle dreams turn to dust” by Frank Morring Jr. 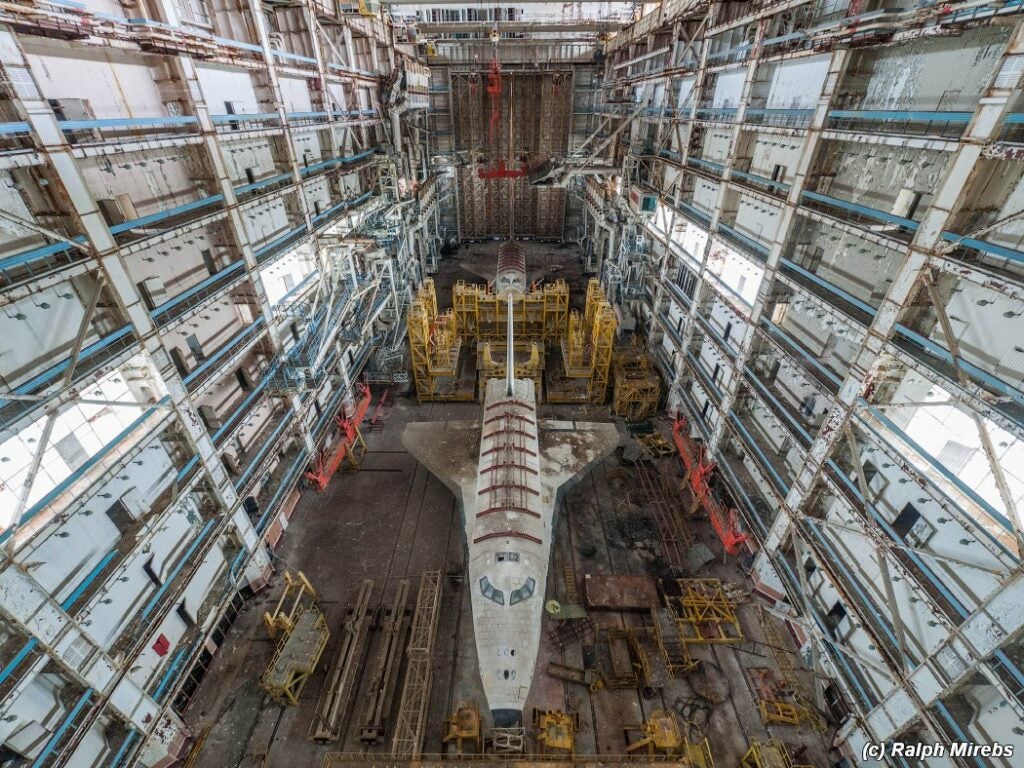 An abandoned orbiter and its mockup.

The unflown orbiter Ptichka and a full scale mockup intended for structural testing purposes sit in a hangar, rotting. 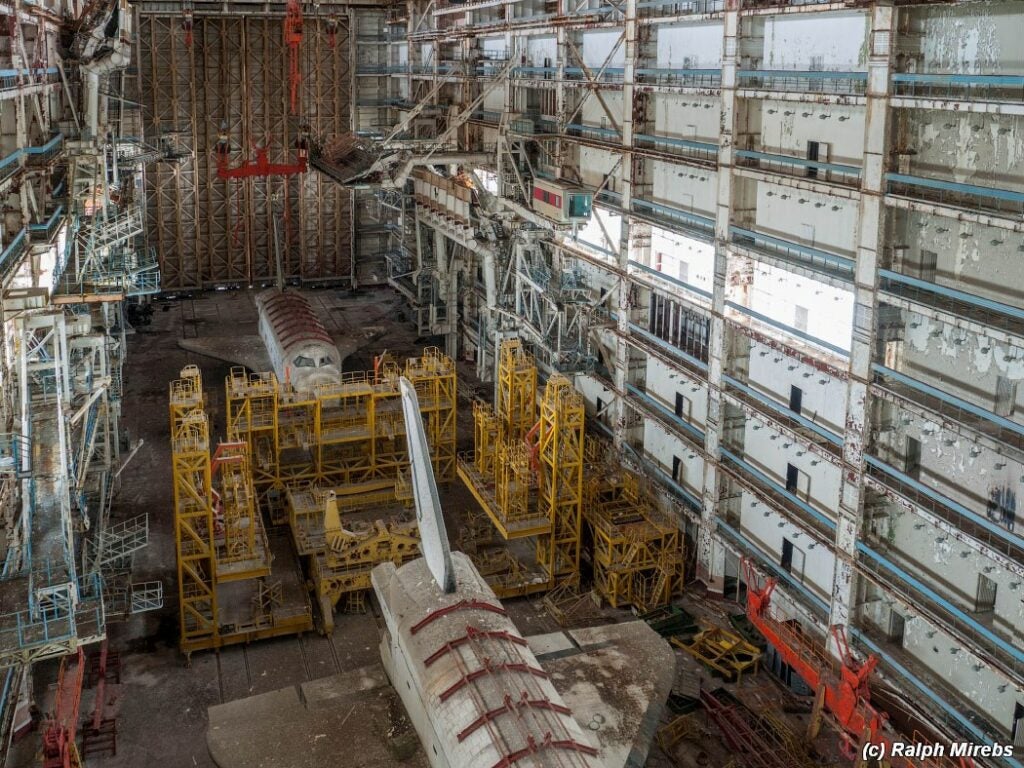 The orbiter and its mockup languishing. 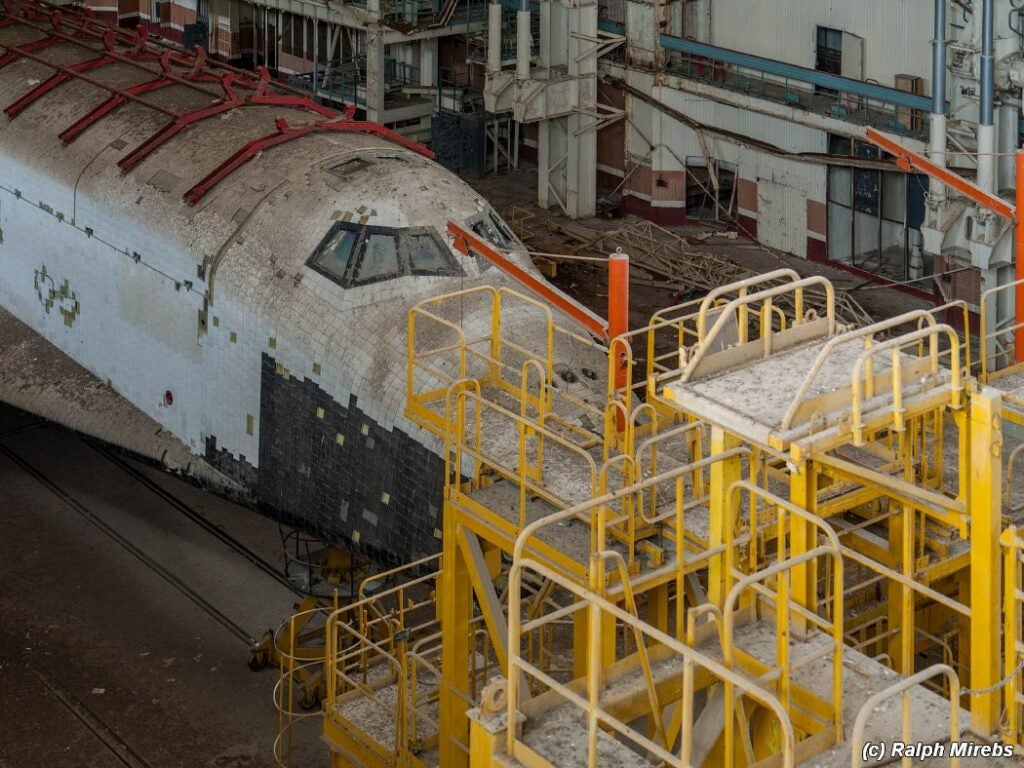 A closeup of the Soviet shuttle’s nose and cockpit. 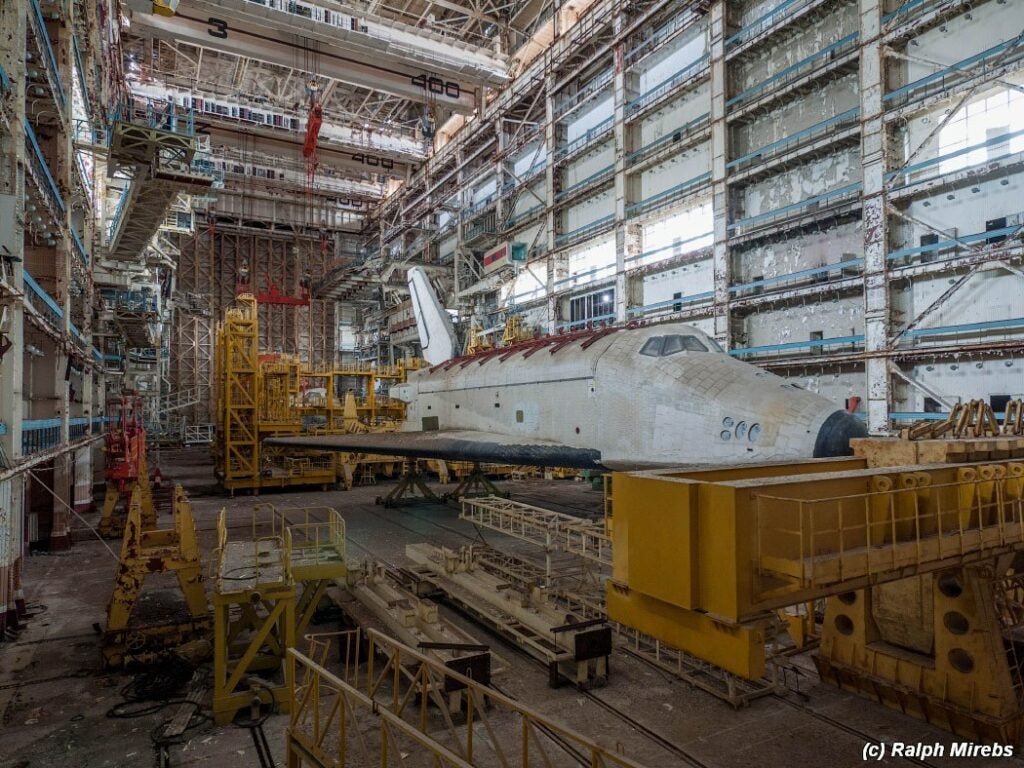 The second Soviet shuttle, Ptichka, which never left the ground. 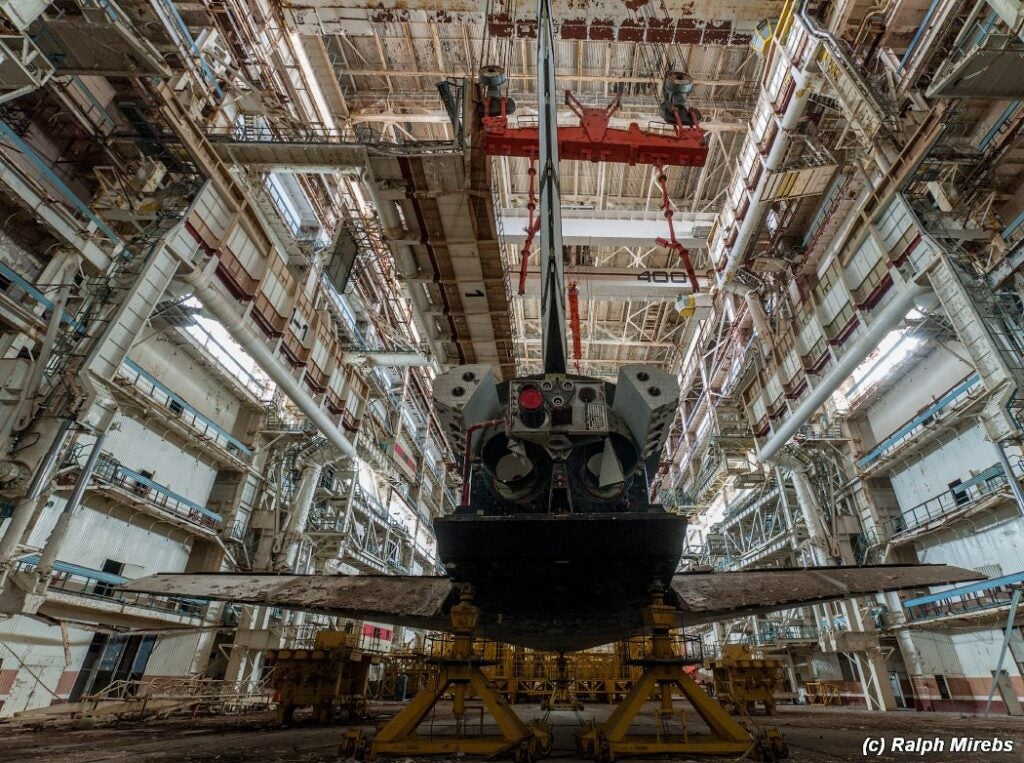 The rear-mounted engines on the Soviet space shuttle. 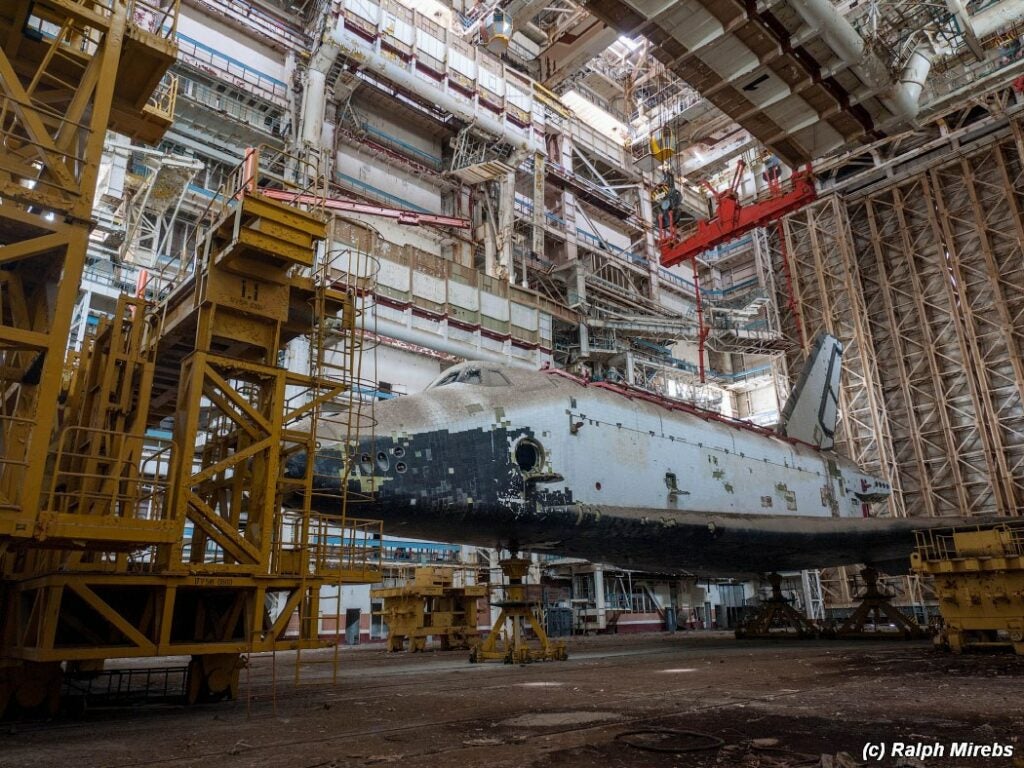 A side view of the Soviet space shuttle. 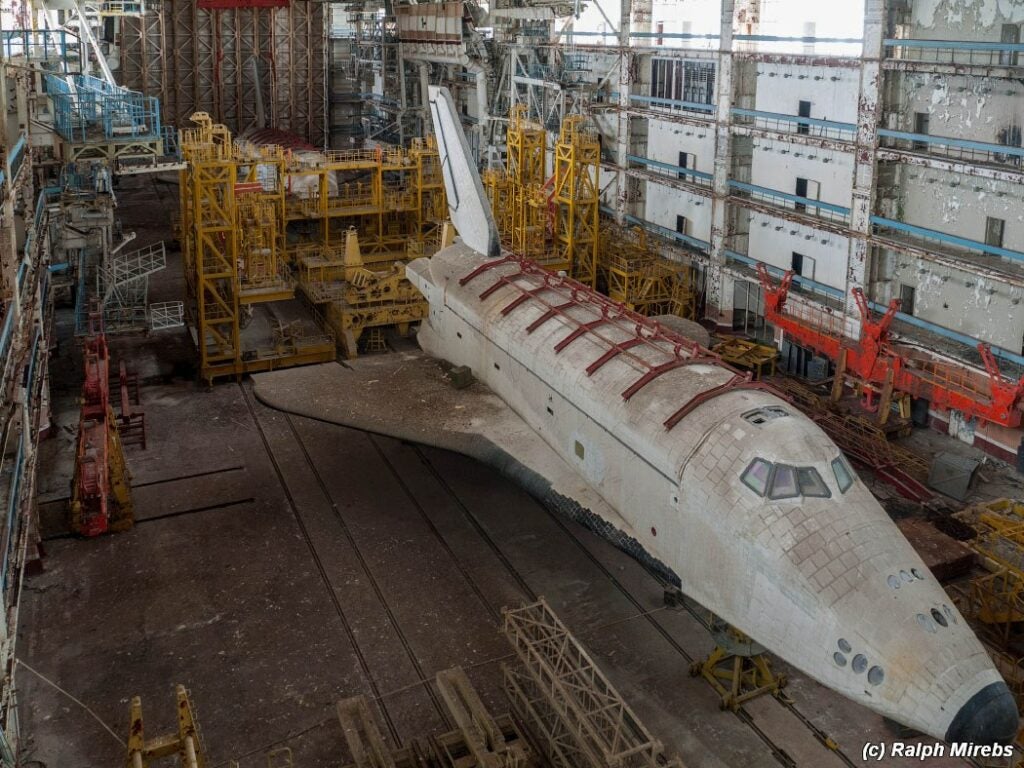 An orbiter and mockup, left to languish after the Soviet shuttle program was cancelled. 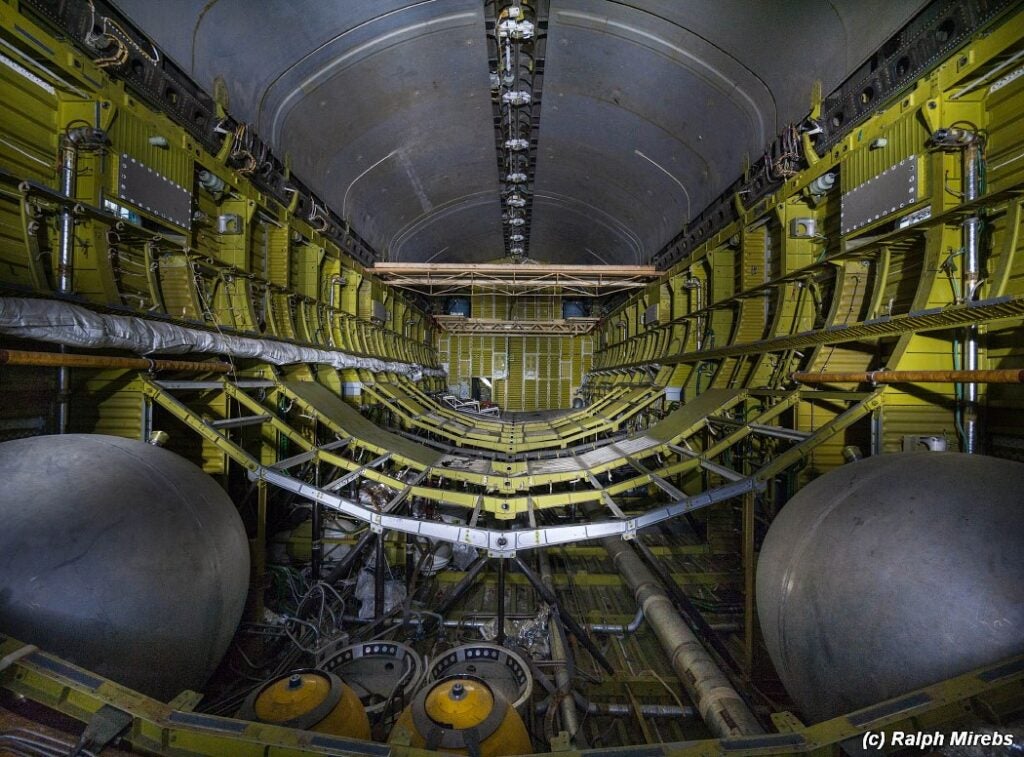 The view inside the Soviet space shuttle. 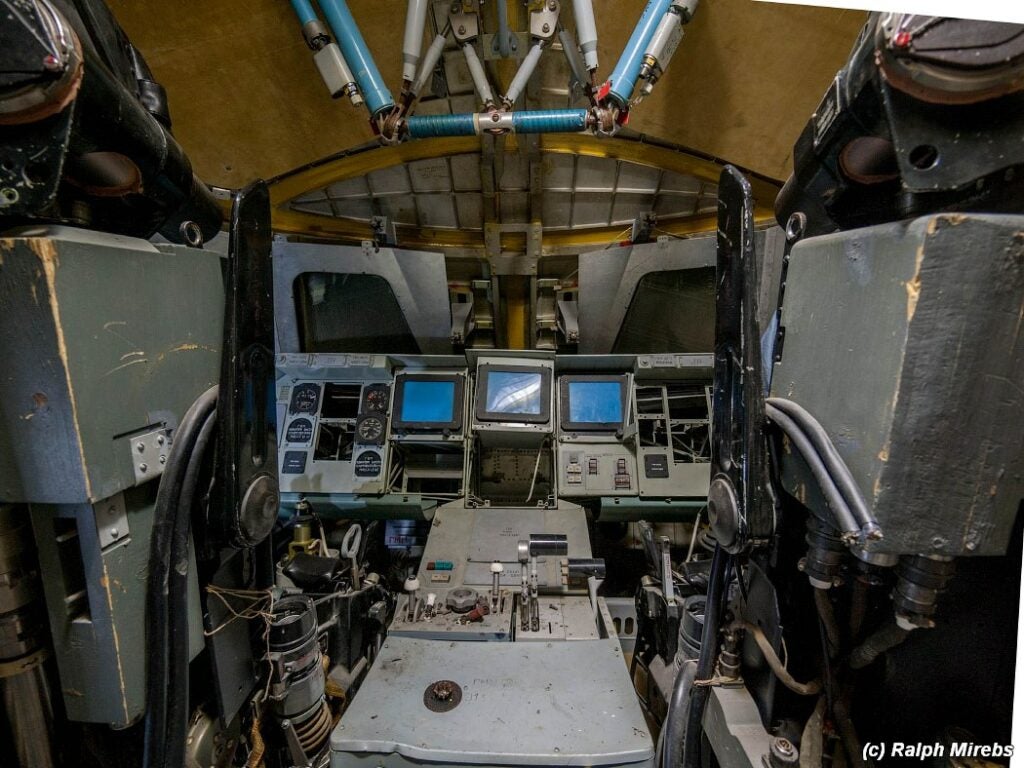 What should have been a highly automated cockpit guiding the spacecraft around the planet. 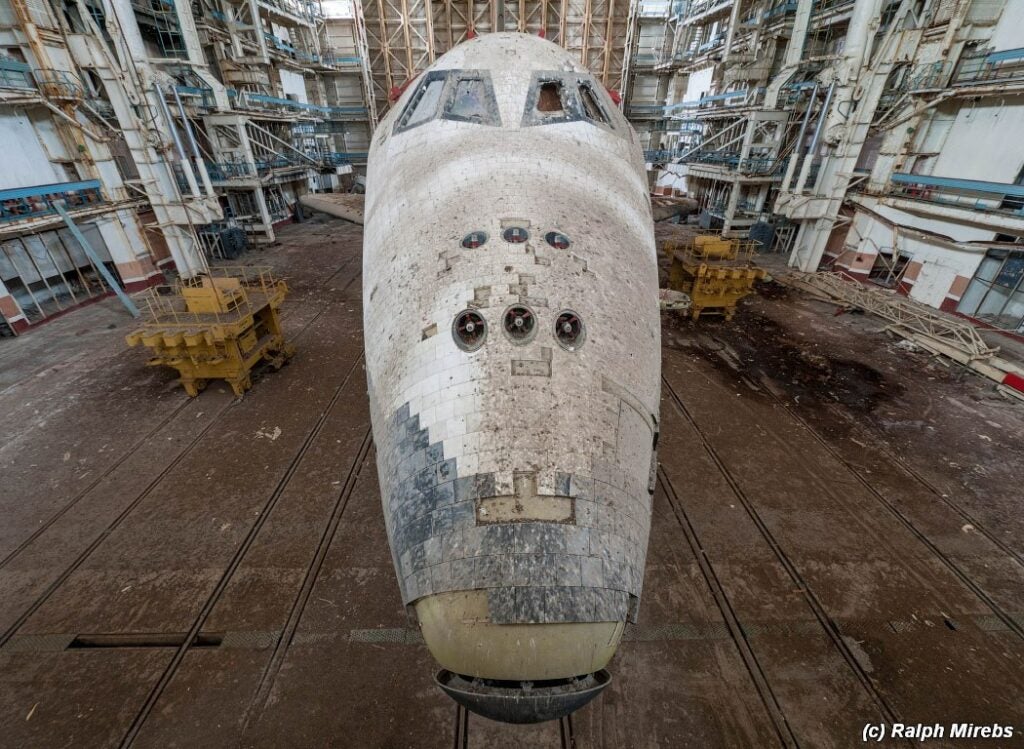 A front view of the Soviet space shuttle. 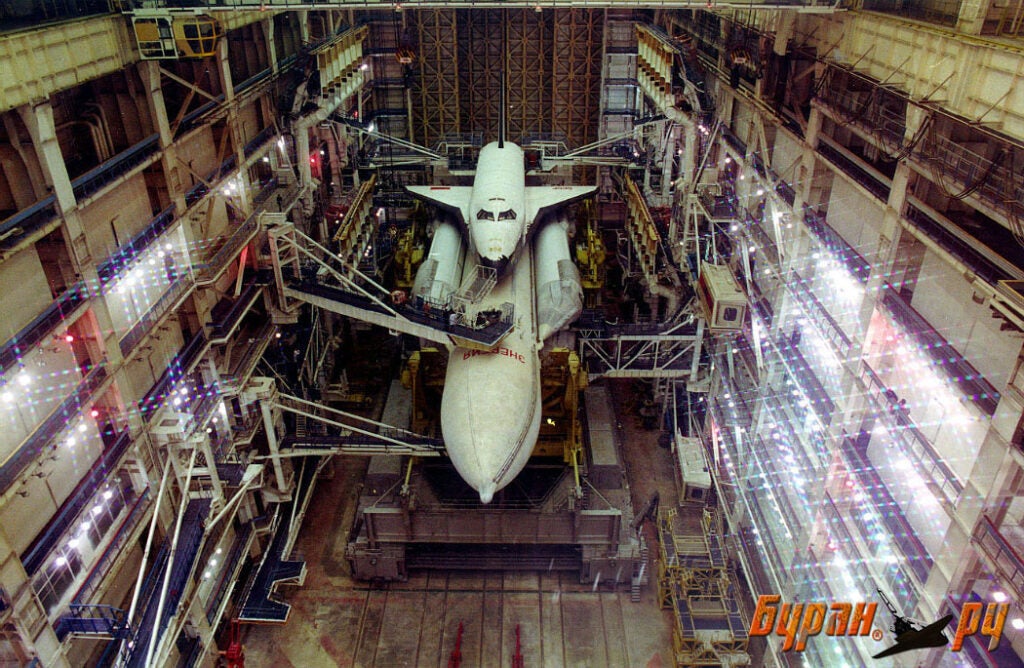 Buran mounted on an Energiya rocket sits in a hangar on display. 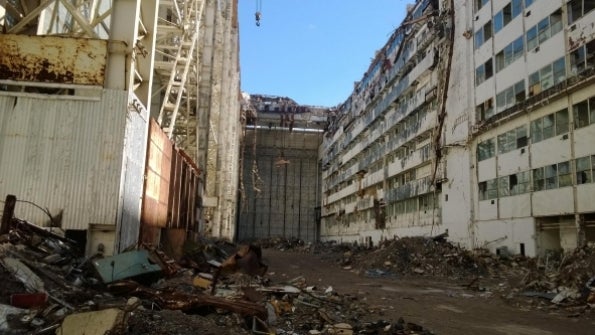 The ruins of the hangar that housed Buran, the one flown Soviet space shuttle.
history
soviet
Space
space shuttles