The Iceman Wore Five Different Animal Products When He Died

Dressed to kill (or be killed) 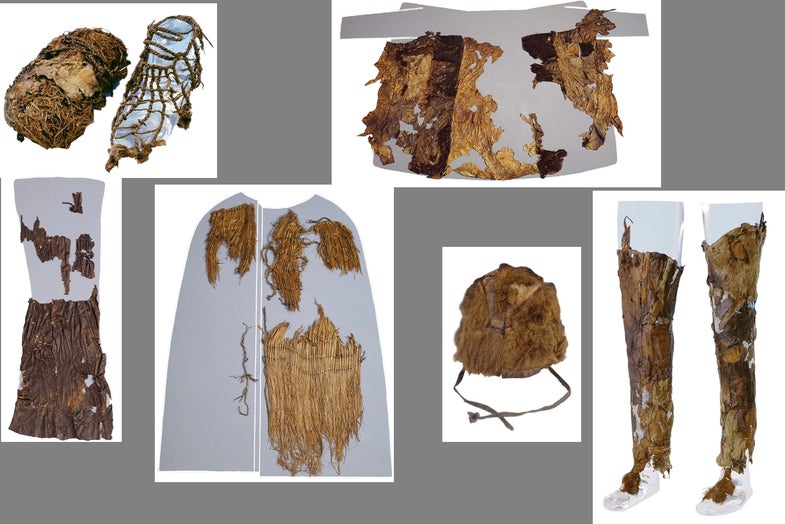 It gives a whole new meaning to the infernal question of every red carpet ever: who are you wearing?.

In a paper published today in Scientific Reports, researchers announced that they had figured out what kinds of animal skins were used in clothes worn by the in famous “Iceman”, by analyzing the mitochondrial genomes of the objects he carried and wore when he died.

The iceman, or Ötzi, was a man who was killed 5,300 years ago, and whose frozen body was only recovered from his resting place in the Alps in 1991. Since then we’ve learned that he was killed by an arrow, suffered from blunt force trauma to the head, and might have been suffering from a stomach bug, but we haven’t known what animals he used to source his protective leather and fur clothing. Now we do.

According to the new study, parts of his coats and his loincloth were made from sheepskin, another coat and his leggings were made from goats, his shoelaces were made of cattle hide, his quiver came from the skin of a roe deer, and his fur hat was crafted from a brown bear skin.

The clothing, especially the hat and the quiver, tell researchers that the iceman was not from a purely agricultural/pastoral society. If he was hunting deer and bear (or other members of his community were) then there was still reliance on other forms of food beyond what could be grown or raised on a farm (like the cattle, sheep, and goats).

Understanding how our ancestors lived can give us special insight into how modern humans coped with changing climates and survived, while other groups like the Neanderthals didn’t.