From the archives: A 1930s adventure inside an active volcano

In the April 1933 Popular Science issue, explorer Arpad Kirner recounted his descent into the mouth of the flaming Stromboli volcano. 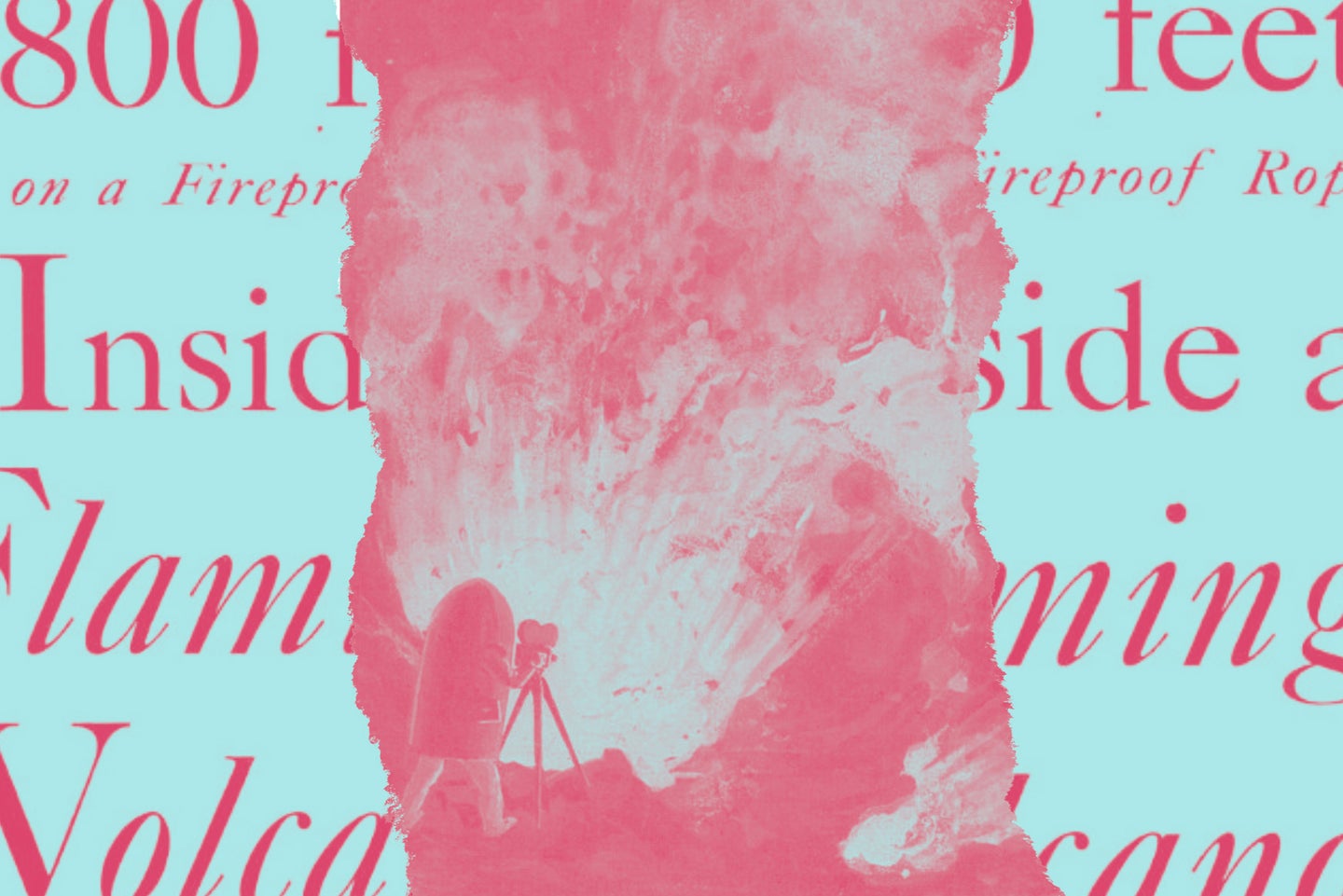 From "800 feet on a fireproof rope: Inside a flaming volcano" (Arpad Kirner, April 1933). Original caption: INSIDE THE BURNING CRATER. Here is our artist's conception of the interior of Stromboli and of the author wearing his steel armor to ward off flying rocks. Popular Science
SHARE

Despite their tragic ends at Mount Unzen in Japan in 1991, prolific volcanologists Katia and Maurice Krafft  were not the first to film hot lava at close range. In April 1933, Popular Science published the dramatic account of scientific explorer, Arpad Kirner, who was lowered by asbestos rope 800 feet into the mouth of Stromboli off the coast of Sicily to film its rumbling, fuming vent-hole.

With a 2,000-year eruption streak and nearly constant fountains of lava, Stromboli is one of Earth’s most active volcanoes. The Lighthouse of the Mediterranean has been spewing bright bombs steadily since 1932 and has had several significant eruptions just this century. Its activity is so distinct that when other volcanoes similarly spout lava, they’re dubbed Strombolian.

While Kirner offers scientific insights into the peak’s guts—“timing the rhythm of the explosions” and “gathering samples of gases and minerals”—he’s not humble, embellishing his tale with narrative flair distinctive of its era. “Inside a Volcano,” represents a bygone style of exploration and storytelling that made up for its lack of nitty-gritty science with entertainment value.

Today, it might be said that technology has taken some of the adventure out of volcanic exploration. While the most intense footage of eruptions still puts humans in harm’s way, drones fitted with gas sensors and sampling devices, may soon offer an alternative. For some volcanologists, though, there’s nothing more exhilarating than sidling up to a lava flow.

Dangling at the end of an asbestos rope, the intrepid author is seen, right, during his descent of 800 feet into the heart of the volcano, Stromboli. Below, a rock on a string was thrown over to get the crater’s depth before the descent was begun. At left, Arpad Kirner.

A slender white thread, a rope of asbestos, rose straight above my head to the edge of the cliff. Below me were boiling lava and billowing fumes. Dangling at the end of the rope, I was being lowered 800 feet into the mouth of an active volcano!

A steel helmet protected my head from flying rocks. My suit, my shoes, my gloves, were all made of asbestos. Strapped to my back were oxygen tanks that enabled me to breathe amid the fumes. I was realizing a scientific adventure which I had planned for years.

My friends thought I was crazy when I announced my intention to explore the crater of an active volcano, to descend the depths of its enormous pit, to photograph the infernal vent-hole while it fumed and grumbled, to go where explosions rapidly follow one another and where phenomena, still mysterious, constantly occur.

None of those who had preceded me in volcanic studies had dared a descent into a crater in full activity. They had contented themselves with simple excursions to the mouth of Vesuvius or Etna during quiescent periods. If I succeeded in my plan, I knew I would witness phenomena unseen by anyone before. If I returned into the open air and sunlight after this trip into an inferno, I would bring back specimens, solid and gaseous, of unusual interest. So I determined to make the effort.

My choice fell upon Stromboli, the volcanic cone rising from the Mediterranean north of Sicily. Why Stromboli? Because it is the only volcano in Europe of uninterrupted activity. Here I risked no dud. In its crater I was sure to find the spectacle I desired.

For me, this volcano was an old acquaintance. I had studied it many times. I had scaled its slopes, approached its mouth and I knew that, from year to year, the shape of its summit underwent modification. To pick the most favorable spot for my descent, I visited it again. Then I prepared my equipment. All was ready!

It was with the greatest difficulty that we hauled the equipment up the side of Stromboli, which rises sharply from the water without the slightest beach. At the spot previously selected, I prepared for the test. I was secured to the asbestos rope by means of a heavy leather belt similar to those used by mountain climbers. Control of my descent was handled from the top by means of a windlass set up several yards from the edge of the crater. To prevent the rope from being worn away by scraping against the rocks, a pulley was placed at the crater’s edge.

Several friends, and some of the island natives chosen for their strength, had accompanied me and worked the windlass to which my rope was attached. As a means of signaling them after my entry into the crater, I carried an electric hand lamp. Wires running down the asbestos rope supplied the current for the powerful little light.

I realized clearly the danger confronting me as I slipped over the edge of the crater and was lowered slowly into space. I knew my return was problematical. My precautions might prove insufficient. My heart and lungs might not stand the strain of the gases and the terrific heat. Suspended in space, I knew not where I was going nor where I would set down my feet. What awaited me at the end of my descent? Solid rock? Boiling lava? A sheer, slippery ledge with fire below? I could not tell.

As I sank into the pit, I studied the walls of the crater, black, red, yellow, pierced with holes from which sulphurous vapors poured. I saw beneath me immense openings veiled in smoke. When I raised my eyes, I estimated the distance I had descended and asked myself:

“Will the rope stand the strain? Can they ever pull me up again?”

Suddenly, the descent was over. I landed on a ledge 800 feet below the top of the crater. The rock was extremely hot, but firm. I could stand up. I measured the temperature of the rock and found that in some places it was as much as 212 degrees Fahrenheit. The air around me had a temperature of 150 degrees and was saturated with poisonous sulphurous vapors. Thanks to my oxygen outfit, I was able to breathe and so began a tour of the crater bottom.

Casting off my rope, I set out for the real openings of the volcano―immense vertical pits from ten to thirty feet in diameter. At intervals, with formidable explosions, these mouths threw forth jets of lava. The pits, however, slanted in such a way that the lava always descended on one side. By timing the explosions, I was able to race to the mouths and, in some cases, actually lean over them, between eruptions, looking perpendicularly into the interior as one looks down a well.

What did I see there? Beyond a screen of smoke and strangely-colored vapors, I saw an incandescent sea of liquid lava, agitated, boiling, shaken with convulsions.

As I watched, this molten sea welled up. The mysterious force which moves it was about to eject it violently. The time had come for the explorer to flee from his post of observation. Scarcely seconds passed before the explosion came, the orifice spewing forth its jet of lava, hurling it hundreds of feet into the air. Great flaming masses fell back into the crater. The rest, thrown farther, rolled and bounded down the flanks of the mountain and plunged into the sea with a hissing of steam.

Three hours passed while I pursued my explorations, timing the rhythm of the explosions, and gathering samples of gases and minerals, studying the unforgettable sights around me and snapping pictures with my camera.

Sensing exhaustion near. I gave my friends the prearranged signal with the hand lamp to haul me out. The ascent was painful beyond words. My will, stretched to the breaking point, deserted me. The oxygen reserve was exhausted and I was forced to breathe air charged with the sulphurous fumes. As I was dragged over the crater’s edge into fresh air, my over-taxed lungs gave way and I suffered a severe hemorrhage.

When I recovered, I felt infinitely calm. After so much effort, so much nervous strain, I was happy that I had succeeded in an enterprise thought impossible by everyone.

Some time later, accompanied by my friend Paul Muster, I had another thrilling adventure on the flank of this same volcano. On one side is a slope, a gigantic inclined plane of cinders more than half a mile wide, known as the “Sciara del Fuoco.” Down it rocks and slag and enormous blocks of lava, roll and bound toward the sea.

No one approaches this slope. Ships that circle the island keep at a safe distance. Nevertheless, Muster and I prepared to make the ascent with motion picture cameras. For the purpose, I had prepared two suits of sheet-steel armor. They would not, of course, protect us from the great blocks of lava, but they would shield us from the small rocks which often fell in showers.

We began the climb. After hours of painful effort, we reached a spot where we could set up our cameras to take pictures of the rocks being hurled from the fiery crater.

With our films exhausted, we prepared to descend the slope again. An immense block of lava set deep in the cinders, some distance from the top, gave us temporary shelter.

Then Muster observed a black rock, fifty feet away, that interested him.

Leaving our shelter, he lay flat on his stomach and wriggled toward the immense cinder. As I was watching his slow advance, admiring his courage, I heard a great clamor rising from the edge of the sea. I swung about. Our friends at the foot of the mountain were crying with terror and motioning toward the crater. I looked up just in time to see a gigantic rock detach itself, describe an immense arc through the air, strike the cinders, throwing them up like an explosion, and bounce again into the air. Horrified, I saw it was headed straight for us.

It fell again and again. Then, with an infernal sound, it roared forty feet over our heads. The rush of air threw us down.

Hardly had we time to take breath when new trouble assailed us. Stirred by the successive shocks, the bed of cinders, slag, and stones covering the flank of the volcano was beginning to move. Great masses detached themselves, and came sliding toward us.

Without consulting, Muster and I instantly arrived at the same idea. With a single motion, we divested ourselves of our armor, which we allowed to roll down the slope. Then abandoning ourselves to the laws of gravity, we followed in their wake.

How long that helter-skelter, breakneck slide continued I do not know. By some miracle we neither broke our backs nor fractured our skulls. Torn by jagged cinders and covered with blood, we reached the foot of the volcano. Here our friends took us in hand, dressed our wounds, and congratulated us upon our escape.